Half a Billion Ringgit! The Turnover On Taib's Latest Foreign Property Venture

Sarawak Report can reveal that the turnover on the Taib family’s latest foreign property venture in the UK has been over half a billion ringgit (100 million pounds sterling) so far and it is still rising.

The Ridgeford Properties development in Bolsover Street, Central London, which comprises several flats, has now sold most of the units in its current 2nd stage of development for a price totalling £98,145,182 (RM537,000,000), according to research by the Swiss NGO Bruno Manser Fund into the UK property register.

Some of the most expensive penthouse flats are yet to have been sold, meaning that the final sum will go well over the hundred million pounds mark.

An earlier development in the block, which belonged to the National Orthopaedic Hospital, has already been completed by the company, which is operating in a joint venture with another enterprise, The Manhattan Loft Company.

It is just one of a number of major buildings bought and sold by the Taibs in London since Ridgeford Properties was launched in 1996.  Ridgeford has now been absorbed under City Gate, a Canadian company, which forms part of the Sakto group owned by Jamilah Taib and run by her fellow director, husband Sean Murray.

One former employee confided that they felt guilty working for a property company owned by a family engaged in destroying the tropical rainforest.

The news of such a stunning revenue generated on just one project owned by the Taibs will focus Malaysians further on the issues surrounding Sarawak’s controversial new governor, who clearly seems set on continuing to control the state from what is supposed to be a largely ceremonial office. 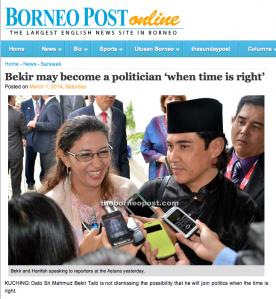 Blatant bid for Balingian- Abu Bekir goes before the cameras with his supportive sister at his side this week.

As head of state the governor of Sarawak is supposed to be above politics. Hence the claim of immunity from prosecution, which Taib clearly coverts as a protection for his illegally accumulated wealth.

However, the former chief minister remains the chairman of his party PBB, which is the second largest political grouping in BN after UMNO and has given no indication so far that he intends to relinquish the post any time soon.

With his sons vying to be selected as his successor in his Balingian state assembly seat, that position is clearly an important one to hang on to in order to influence the selection.

In a further blatant violation of the rules Taib has continued to ignore the constitutional demand that neither the chief minister nor the governor should be a director or shareholder of a company.

These directorships are over and above his directorship of the company Mesti Bersatu, which Sarawak Report has already demonstrated has major interest in numerous property concerns and contractors in Sarawak run by Taib family members.

The Edge has also pointed out that these companies have all applied recently for ‘exempt’ private company status, in order to avoid having to provide any financial information on the public company register.

The paper speculates that a number of Taib related companies have resorted to this tactic since the various disclosures by Sarawak Report into the governor’s financial interests.

It was only just last week that the Kuching High Court expressed ‘confidence’ that Taib would surrender all his company directorships were he to be appointed governor.  The ruling was made in response to the opposition party DAP’s protest that his business dealings precluded the former chief minister from being appointed under the constitution. 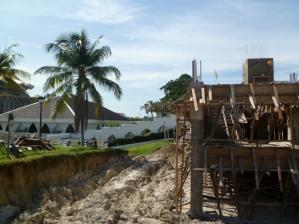 The ex-chief minister has installed his sick relative into his former position, Adenan Satem, who has been unable to attend several functions already, owing to ill health, according to onlookers.

Nevertheless, Satem has moved to announce himself in charge of the three main offices of state, thus enabling Taib to continue his blatant dictatorship through him from his newly built ‘Administrative Wing’ at the Astana Palace.

Taib clearly thinks that the supposed rules of immunity can protect him, while he himself breaks all the rules in the book!

The fact that the new governor’s own family business CMS has leapt in share price over the past couple of days confirms the business assessment that Taib Mahmud is back very much in charge of what goes on in Sarawak and that he will be continuing to run the state in such a way that benefits his own finances.

This will include destroying huge areas and displacing thousands of native people from their homes to build 12 controversial mega-dams through the so-called SCORE programme, the mega-project ‘brainchild’ of Taib Mahmud.

The dam building bonanza is targeted at hugely profiting CMS and other companies belonging to Taib, which will receive all the contracts in this state financed exercise driven by the Governor to benefit himself.

As one business sector news sheet put it yesterday:

“Shares of Cahya Mata Sarawak Bhd (CMSB) climbed to a high of RM8.42 on Wednesday, the highest since September 1997 as it is a key beneficiary from Sarawak’s infrastructure development…..The cement producer has effectively rebounded from the recent decline ahead of the resignation of Tan Sri Abdul Taib Mahmud as the Chief Minster in February.

CMSB said it was one of the best proxy listed investments for Sarawak’s accelerating economic growth. This was due to the State’s plan to promote energy intensive industries under the Sarawak Corridor for Renewable Energy (SCORE) and secondly from the infrastructure required across the state.”[Star Business]

In other words, fears that the Taib company might not be able to award itself contracts in the same way under a new leadership have now been allayed, since it has become clear that it is dirty business as usual in Sarawak.

Sarawak’s Dayak leaders, who have been universally snubbed along with their peoples by all these moves, must consider their options.  They will not be readily forgiven for standing by, although it will be nothing new.