Has Taib Crossed A Line? 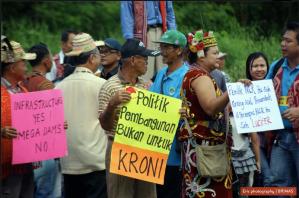 Taib can no longer claim possession of the concept of development. People know there is more than one way.

The show of colour and the peaceful nature of the protest were both very typical.

But, if strongman Taib Mahmud still bothers about what his people think, it should have worried him.

Because, these were rural folk.

As past elections have fully demonstrated, Taib has already completely lost the support of the townships in Sarawak.  Those seats went in 2011 and they did not come back in 2013.

The potentate, who is making plans to shift his power into the Governor’s palace and set someone else in the firing line as Chief Minister, already lives surrounded by people who hate his corruption and who vote against him.

Yet the people who dared to march on Human Rights Day had come into the towns from indigenous areas. If these communities are also deciding that enough is enough, then Taib is cooked, Governor’s Palace or no. 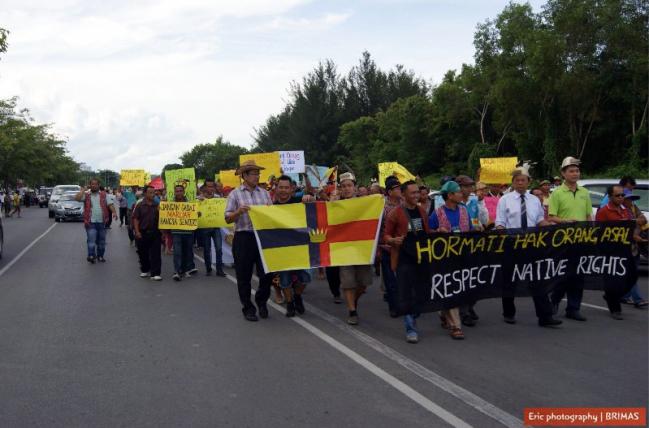 Rural flavour was pronounced in these marches. People had made the effort to get in from all over Sarawak

Sarawak provides an exaggerated form of the wider Malaysian electoral corruption and gerrymandering.

A small number of vast urban seats contain tens of thousands of electors, while scores of rural seats have just a few hundred voters, whom Taib’s agents make sure to keep poor and then bribe and blackmail into ‘doing the right thing’ on election day. 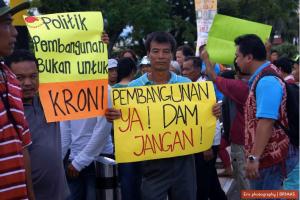 Kroni – The dams are associated with corruption

So far they have tended to cooperate, not least because ‘trouble-maker’ communities have found it almost impossible to register as voters, thanks to BN’s abuse of power.

It is also well known that change generally comes last to rural areas.

Isolated communities are slower to embrace the new ideas around them, especially if they are vulnerable and poor, with mainly older voters.

But, usually they get there, if it is in their interests.

And with his determination to displace tens of thousands with his hydro-power ambitions Taib may well have crossed a line that will end their loyalty.

The Chief Minister/ Governor-In-Waiting ought to be wondering if these unprecedented demonstrations were a sign that the political change that has already arrived in urban areas are catching on elsewhere? 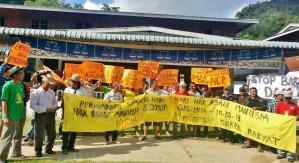 Protest in Baram as well

Perhaps he thinks it doesn’t matter.  That rural folk can vote how they like, but he will always record the result he wants? (His family newspaper, The Tribune, reported on rallies in Cambodia not back home in Kuching).

But, if his actions are forcing these people on to the streets, such arrogance starts to betray a complacent attitude. The attitude of an old man too used to having things his way for far too long.

Taib has brought roaring change to Sarawak, mainly to make money for himself. But, it is not the kind of change that has been good for most people.

The timber and much of the native land has already gone to plantations. But, now the CM is going a step further.  He is destroying the rivers and uprooting thousands so that he can start massive industries manned by foreign workers, the so-called SCORE hydro-power programme. 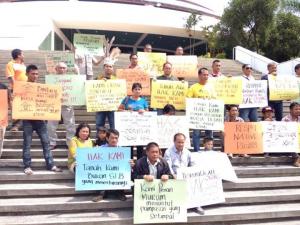 This is the sort of disruption that even the most inward looking rural communities cannot ignore.

And the examples of the past victims of Taib’s dam building are there to inspire fear not envy – all those communities are complaining about the negative impact and the broken promises.

Is Taib too old to realise how these days news travels?

BN agents may cajole the headmen. BN newspapers, TV and radio may promote ‘SCORE’ with endless positive spin, but the opposite message is now reaching concerned communities in Baram and Baleh and beyond, especially from the towns, where the the opposition parties now have their base.

DAP and PKR and NGOs are pointing out that Taib’s unpopular plans to “modernise” them by destroying their lives do not have the support of the rest of the world, because they violate human rights. 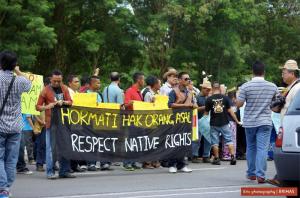 Each banner proclaims a new awareness amongst Sarawak’s rural folk. They have started to understand their rights.

They are informing rural people that BN’s methods do not come up to scratch against expected norms.

They add that communities should be consulted, compensated and treated as equal if not superior decision makers in these plans to change their lives.

And naturally, worried rural folk are tending to agree.

In a statement on 26th November leaders from Baram protested against the state government’s constant jibe that their resistance to the dam projects is purely the consequence of ‘orchestration’ by foreign NGOs.

They pointed out they are perfectly capable of working out their own best interests, but that they welcome the support of sympathetic organisations:

“We will do our utmost and exhaust every appropriate channels to assert and defend our rights to our homeland, our source of livelihood, our rights and our future. We also welcome every form of support from all concerned individuals, NGOs, governments, political parties and agencies.

We have our own intelligence and capacity to think and decide for ourselves and our future. We are also fully aware that we have rights to our customary lands, territories and resources. We have rights to determine the kind of development that we regard as appropriate and that which meaningfully benefit us. We need development to improve and to uplift our standard of living, that diversify our present socio-economic activities but not a project that forcibly displace and uproot us from our homelands, gardens, farmlands, resources. That is not development. That is destruction and elimination.

We act with our clear conscience and we do not allow ourselves to be used as tools.”

This statement, signed by several rural leaders in Baram, showed very considerable awareness on the part of rural folk. Doesn’t this worry Taib at all?

In fact the statement goes on to mock Taib himself for being the one in the thrall of foreigners, by pointing out his dependence on outsiders, like the highly paid Torstein Dale Sjotveit, to implement his grandiose hydro-power schemes.

Next stop, voting for the opposition?

Another important report was released at the end of last month by the NGO Sabahat Alam Malaysia (affiliated to Friends of the Earth) pointing out the “continued failure of the country to introduce the necessary reforms to its policies and legislation in order to ensure that they are aligned with judicial decisions” with respect to native rights. 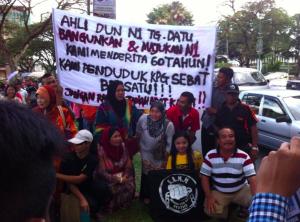 It is a reminder that the Chief Minister has already lost the argument over his land ‘reforms”, even though he is now taking on tens of thousands more rural people to force through his dam projects.

Time and again the courts in Malaysia have found that the State Government and its leader Taib, have acted illegally in appropriating the timber and native customary lands of indigenous peoples, without so much as a by your leave.

Sabahat Alam Malaysia (SAM) points out that, given the failure of the state and the federal government to respond to the decisions of the courts, the legality of all logging and plantation licences in Sarawak are held to question:

“Despite an array of judicial decisions on the indigenous customary land rights/title over the last two decades, the executive machinery at both the state and federal levels in Malaysia have continued to operate in the same manner as it had before – issuing licences for logging, plantation and other resource extractive activities without prior consultations, disregarding the authority of pre-existing traditional laws and customs of the people, from which inherited claims of rights on customary land are rooted.

Some of these decisions, have very wide-ranging legal implications on existing policies and statutes. Ultimately, the failure to implement these decisions is a failure in good governance and a failure to live up to the doctrine of separation of powers in democratic governance.”[SAM position paper on judicial decisions] 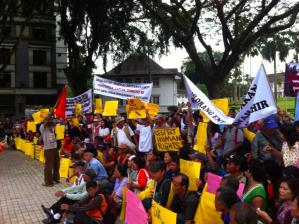 Has Taib pushed the rural folk too far?

Numerous native communities, who have won their cases in court have yet to receive any satisfaction in terms of seeing their victories reflected in improved behaviour on the part of their State Government.

The Chief Minister has just carried on handing out licences as before, ignoring traditional native rights.

All over Sarawak people are beginning to get the message that Taib’s mode of government is as old and outdated as he is and if he refuses to listen there will be more marches for change.

Then change may very well come.