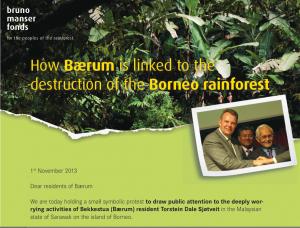 Leaflets were distributed around Baerum

When he is not tearing down tropical trees in Sarawak, the chief officer of Sarawak Energy has his home in a very smart, leafy suburb of Oslo in Norway, known as Baerum.

Last week, appalled at the latest round of mega-projects handed out by this hired Norwegian to companies owned by his boss, the autocratic ruler Taib Mahmud, NGOs decided it was time to inform the residents of Baerum about the corrupt activities of their wealthy neighbour, who spends so much time on the other side of the world.

So, they came to Bearum, Norway to distribute leaflets explaining what Sarawak Energy (SEB) boss Torstein Dale Sjotveit is doing in Baram, Sarawak and how the entire project is linked to Taib Mahmud’s kleptocratic destruction of the world’s oldest rainforest.

The team began by handing out leaflets to commuters at the local station at Bekkestua and then went into the neighbourhood to spread the message about Sjotveit and drop in a copy at his smart hill top residence. 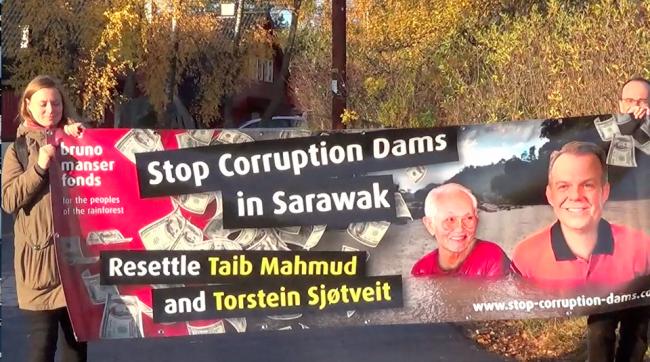 Within the hour Datuk Sjotveit was sending a volley of emails in protest from Kuching denouncing what he described as a “hostile demonstration outside my home”, which he claimed had “scared” his family.

“I deny categorically that I have ever been involved in corruption or corrupt practice, neither before I came to Sarawak nor while I have been in Sarawak and I can promise you I will never in the future. You keep on making these lies about me personally and now going one step further by threatening my family and coming to my house with banners and hostile foreign demonstrators, I am totally shocked”

“I now understand that BMF [Bruno Manser Fund] has staged this treating and hostile demonstration in an attempt to frighten my family in peaceful Oslo.” [Torstein Sjotveit]

The NGO responded that they considered the CEO should reserve his concerns for the indigenous people who have more genuinely suffered from his actions as head of SEB:

“We exercised our legitimate right to politely inform your neighbours on what you are up to in Sarawak and take some photographs of your humble home which took a couple of minutes only. We were neither threatening nor hostile. However, it is of course threatening and hostile of SEB to close the floodgates on a riverside community before an agreement has been reached on their resettlement. It is even more threatening and hostile to confront their peaceful protest by armed riot police shooting in the air above their heads. Maybe, instead of complaining, you should rather be thinking about what you are doing to these people and their children who will lose their native lands without having a comfortable home to retreat to?” [BMF response]

The NGO delegation was also in Norway at the invitation of the country’s official crime fighting agency Okokrim, who invited them to a meeting at their Oslo headquarters to present a dossier on Sjotveit’s activities in Sarawak. 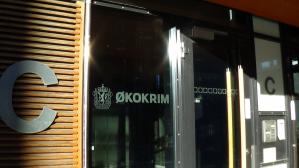 Arnt Angell, Chief Public Prosecutor and Head of Okokrim’s Department II, confirmed that Norway’s stringent corruption laws means that nationals are subject to prosecution for crimes committed abroad as well as in Norway itself.

Following discussions, the organisation took receipt of the dossier drawn up by the Swiss Bruno Manser Fund, supported by its Norwegian partner, the NGO FIVAS, and indicated the matter will be looked into.

After all, it last week emerged that Sjotveit has authorised the handing of yet another US$200million in power cable contracts to Taib family companies, including Sarawak Cable Bhd, the company set up by Taib’s son in order to scoop up the profits from the so-called SCORE ‘Corridor of Energy’ project.

This latest handout takes the SEB contracts alone which Torstein has awarded to the Taibs to US$400million. 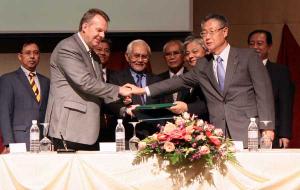 On top, the Taibs are further benefiting from road building contracts, construction contracts and of course the key monopoly they hold over cement to build these dams, all of which are being handed to them by “negotiated” as opposed to public open tenders.

As this website has already exposed, Sjotveit took out a huge RM30billion (US$10billion) loan for state owned Sarawak Energy to cover such projects in 2011.

However, since the newly elevated Datuk has avoided publishing any Annual Reports since 2010, the world is none the wiser about the details of this dam building spree that he and Taib are spear-heading in Sarawak.

Not just constructing SCORE but benefitting from the cheap energy contracts

As NGOs also pointed out to Okokirm, it is notable that nearly all the cheap energy contracts from Bakun and now Murum, have involved further enriching deals for the Taib family (see SEB’s UN presentation photographs below).

For example, OM Holdings, a China-linked off-shore company, based in Bermuda, which is investing in a manganese smelter, has offered a raft of deals and contracts to the Taib business interests, including building contracts and a 20% share in their Sarawak subsidiary company. 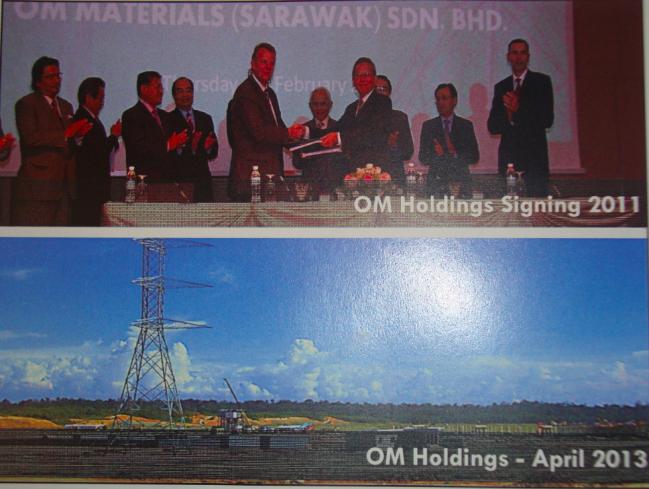 Likewise, Rio Tinto Alcan pulled out of its planned aluminium smelter after Sarawak Report exposed how a similar deal had been forged with the Taibs.

The Sarawak state submission to the UN is plastered with pictures of Torstein Sjotveit and Taib Mahmud (above and below) signing deals with heavy electricity consuming smelting industries, all of which have seen major contracts going to the Chief Minister’s own companies.

These include the Press Metal Aluminium smelters: 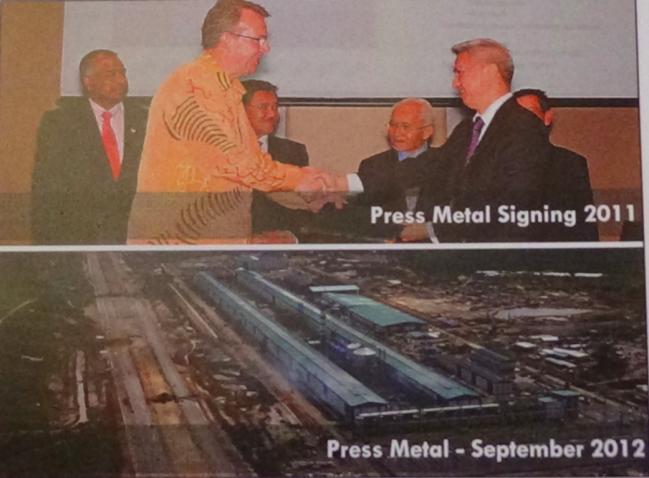 Me and my boss – the RM8.2million SEB cable transmission contract for Press Metal went to Taib family’s Sarawak Cable (photos from the SEB presentation to the UN) 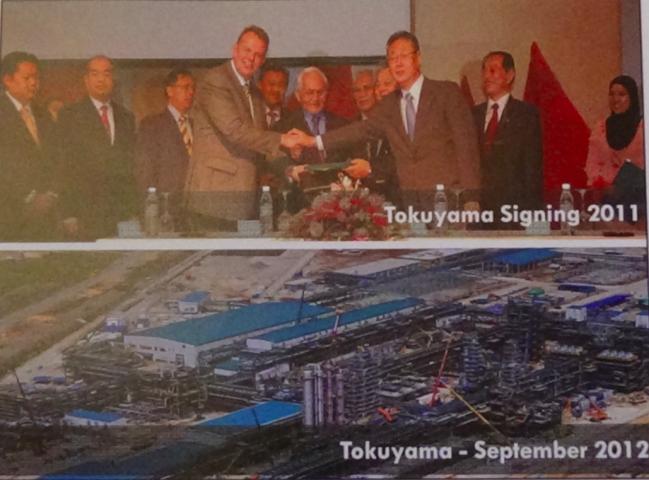 Me and my boss – no sign of Chairman Hamed Sepawi as Chief Minister Taib Mahmud presides over the self-enriching deals sealed by SEB’s Torstein Sjotveit.

Yet there are growing concerns over the introduction of such industries with a record of lethal pollution in China and elsewhere.

This is particularly since there have been several reports and complaints about health problems and the death of vegetation surround the existing Press Metal plant in Mukah. 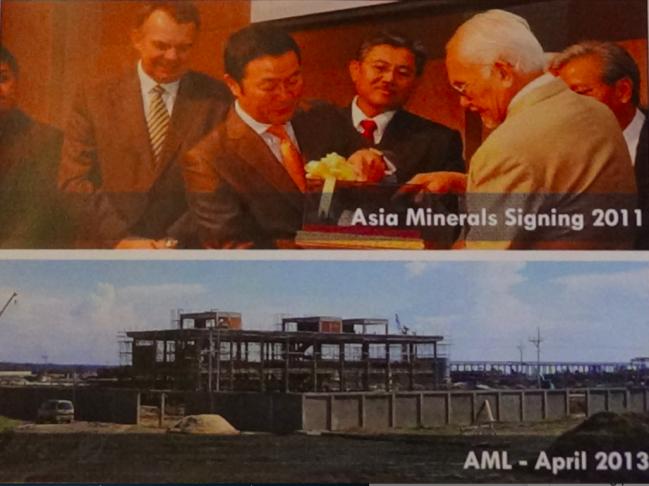 Me and my boss – yet another big transmission line project for the Taib family’s Sarawak Cable (photo, SEB presentation to the UN)

NGOs are concerned there has been no independent Environmental and Social Impact Assessments that would reassure objective observers that the interests of the local population and of this incredibly sensitive rainforest environment are being protected.

After all, the man in charge of Sarawak’s National Resources and Environmental Board (NREB) is the Planning & Resources Minister, none other than Taib Mahmud himself!

It is therefore plain to see that what is being trumpeted in the name of ‘public interest’, is in fact generating fantastic private profits for Taib himself, thanks to the compliance of SEB’s US$1.2million a year energy boss, Torstein Sjotveit. 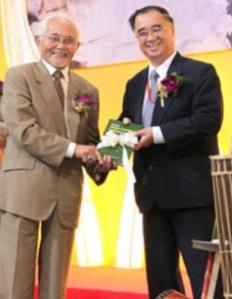 Sjotveit performed a further favour for Taib by sending his Australian Vice-President Nick Wright to Geneva last week to present a paper claiming that the State of Sarawak and Sarawak Energy have not violated a single aspect of human or indigenous rights in the state.

At the time, no less than six native blockades were in progress protesting the callous implementation of the Murum Dam forced resettlement and also the starting of works on the Baram Dam, which Sjotveit told the UN was not yet even decided.

But, how appropriate and subjective could this spokesman be, given that Fong is also one of the key Directors of Sarawak Cable, the company that has been receiving the lion’s share of the contracts, working alongside the Chief Minister’s son Abu Bekir Taib? 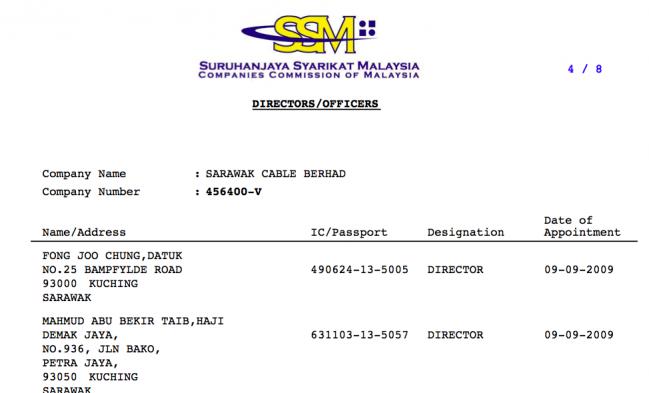 Disinterest voice on behalf of the Sarawak people or a businessman on the make?

The fact that J C Fong also has acquired a hefty 1 million shares in the company making him one of the largest individual shareholders is yet another example of how the SCORE programme represents private interests and not the public interest in Sarawak.