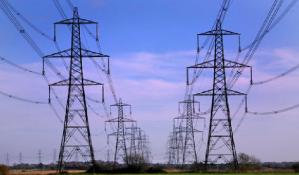 Billion ringgit project to be paid for by Sarawak taxpayers

For some months already the party has raised concerns about Sarawak Energy (SEB)’s suspicious preferences towards the company Sarawak Cable Bhd when awarding contracts.

Sarawak Energy (SEB) is itself a major shareholder in Sarawak Cable and one of the Directors of Sarawak Cable is Abu Bekir Taib, the Chief Minister’s son.

Of particular concern to DAP last year was the announced intention by Sarawak Cable to buy up Trenergy Infrastructure Sdn Bhd, which was the seeming favourite to win SEB’s major contract to build a RM1.151billion ‘backbone’ 500kV transmission cable from Simalajau to Tondong.

Trenergy is largely owned by Abu Bekir himself.

“Neither Trenergy nor Sino Hydro [in joint venture with Trenergy] have a sufficient level of expertise to carry out such an enormous electrification project” DAP leader Chong Chieng Jen told Sarawak Report “and what is more their bid was RM134million higher than that of the most experienced shortlisted bidder, Shanghai Electric”. 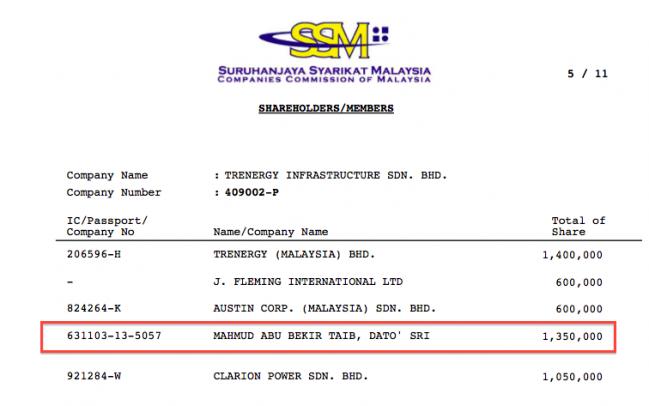 DAP spokesmen publicly protested that Abu Bekir Taib as one of the Directors of Sarawak Cable was driving the acquisition of Trenergy Infrastrusture and that SEB was involved, because of its own shareholding in Sarawak Cable.

Their protest delayed the awarding of the backbone project, which was re-tendered, but now the final decisions are said to be imminent.  In the meantime Sarawak Cable has carried out its acquisition of Trenergy, which is still being touted as the favourite to win the billion ringgit project.

Meanwhile, Sarawak Report has just informed DAP that Abu Bekir is also the major shareholder of Sarawak Cable, a fact that had been hidden by the use of front companies and nominees and the opposition party are now making clear they will report the entire deal to the MACC should the Trenergy bid win the contract as expected.

DAP’s YB Chong says he learnt from concerned insiders in mid-2012 that SEB was preparing to hand the backbone project to the more expensive, yet least experienced partnership, which just happened to be headed by the Chief Minister’s own son. The shortlisted 3 tenders were:

According to insiders Shanghai Electric, an established leader in the field, had spent a year assessing the project with top professionalism and yet it was the more expensive Sino-Trenergy JV that was chosen to be awarded the contract.

“They went to every pylon position and mapped out exactly what engineering would be involved and the costs.  It took them a year.  By contrast, the other joint ventures undertook virtually no reconnaissance. Yet, scandalously, all the companies achieved the same score under SEB’s technical evaluation, which itself was carried out by just one company individual” explained the Kuching State Assemblyman. 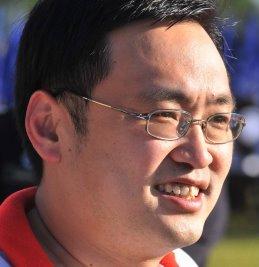 Of even more concern, argued Chong Chieng Jen at the time, was that the company Sarawak Cable Bhd made no secret of the fact that it was planning to buy over Trenergy Sdn Bhd.

Sarawak Cable is also substantially owned by SEB itself, which means that SEB had a direct interest in awarding the bid to its own planned subsidiary!

Furthermore, Sarawak Cable owns a large chunk of another company that used to belong to  SEB, Sarwaja Timur, which specialises in building pylons.

Indeed it has been questioned why the state company (Chaired by Taib’s cousin Hamed Sepawi) had elected to sell this valuable concern to the privately owned Sarawak Cable.

DAP noted that Abu Bekir Taib, the CM’s son was a Director of Sarawak Cable.

After the party raised its concerns, the original plans to award the contract were put on hold, causing DAP to suspend its earlier complaints.

Nevertheless, Sarawak Cable went ahead and bought over Trenergy as planned and the matter is once again a red hot issue, since it has been announced that the revised tender bids will be awarded shortly and all the indications are that Trenergy will still get the lion’s share of the contract.

It has not gone unnoticed either that, shortly after the general election, SEB awarded Trenergy/Sarawak Cable another separate mega-project, the Tundan Miri Airport power line worth RM32million.

Taib’s son is mopping up all the SCORE projects – which appears to be the main purpose of borrowing billions of ringgit to ‘industrialise’ the state.

However, what DAP was unaware of until Sarawak Report highlighted the information, is that the very largest shareholder in Sarawak Cable is also none other than Taib’s own son Abu Bekir!

Company information currently obscures this Taib family interest, because Abu Bekir put his shares In Sarawak Cable into the hands of nominees and another company Central Paragon.

Yet, Sarawak Cable’s own latest Annual Report and historical company records, show that Abu Bekir Taib owns even more shares than SEB.  His share amounted to a full third of the entire company even before the acquisition of his other company Trenergy Infrastructure. 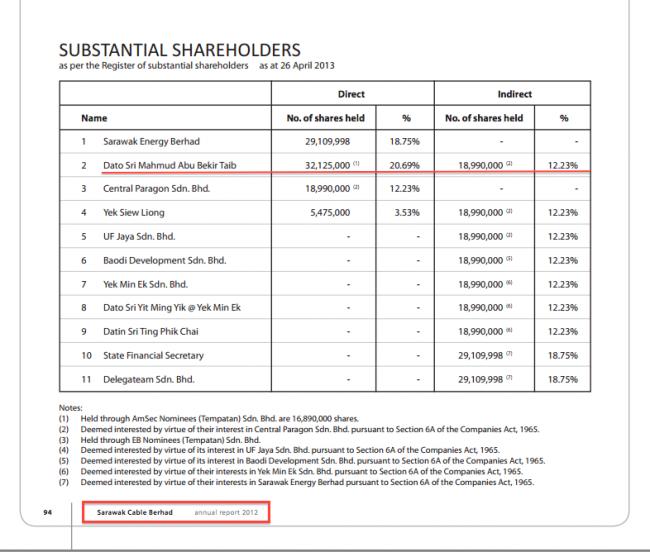 Web of inappropriate interests – Taib’s son is the biggest shareholder of Sarawak Cable which has been awarded major contracts by SEB and also of Trenergy, which is tipped to get the latest mega-contract and has now been bought up by Sarawak Cable.

If the current speculation turns out to be correct and the bulk of the backbone tender is indeed finally awarded to Trenergy, it seems certain that DAP will consider it necessary to report the situation to the anti-corruption authorities, given the blatant conflicts of interest and manipulations of the tendering process.

The man chiefly responsible for the decision making at SEB is the Norwegian Chief Executive Torstein Sjotveit. 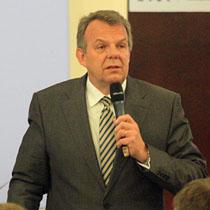 After DAP originally raised its concerns about Trenergy’s favourite position to win the cable contract last year, SEB suddenly announced that the awarding of the project would be put on hold.

Then SEB declared that the whole bidding process would begin all over again, with the transmission cable project now being divided into three separate chunks, to be bid under separate tenders.

At the same time a ‘witch hunt’ got underway to identify who might be responsible for the leak of information about Trenergy’s pole position to snatch the original multi-million dollar project.

It resulted in a senior manager, Chua Yaw Chiang, being dismissed on the grounds that the bid was being handled by his department.

But, Chong Chieng Jen has contested this decision to discipline the Sarawakian manager, as he says that the actual head of the department concerned was an appointee of CEO Torstein Sjotveit and another Norwegian:

“As a result, the acting director for the Project Execution Division, Chua Yaw Chiang, was demoted and transferred out from division. The reason given was that the division which he was in-charge has leaked information (the tender prices for the 500 kV Backbone Transmission Project). Most unreasonably, the head of the division is not Chua Yaw Chiang, but an ex-patriate engineer by the name of Einar Kilde. Has SEB returned to the White Colony Era whereby the Whites have immunity from all blames and any wrongdoing, a local must take the blame? What is the relationship between the CEO of SEB, Tolstein Dale Sjotveit, and this Einar Kilde that the latter is so protected from blame?” [Chong Chieng Jen] 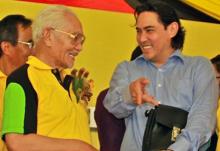 No expert? Never Mind! Abu Bekir has received billions and billions in contracts and concessions from his Daddy the CM

It means that the questions are piling up thick and fast for the high salaried CEO of Sarawak Energy, Torstein Sjotveit particularly since the speculation has started again to grow that Trenergy is once more to be announced as the major winner from the second round of tenders.

First question is on what grounds is Sjotveit favouring more expensive bids by less experienced operators owned by the son of his ultimate boss, Chief Minister Taib Mahmud – a company in which SEB itself also has an interest?

Second question, why has this whole process been hidden and secretive, when public interest is at stake and why was the person blamed for being in charge of the department responsible sacked, when information that ought anyway to be public leaked out?

Einar Kilde – too Norwegian to sack?

Third question, why was a more junior Sarawakian sacked instead of the actual head of the department, who was a fellow Norwegian appointed by him?

Forth question, with public finances and public safety at stake, why was allegedly just one person appointed as responsible to make the technical evaluations (one Raphael Chung) and how come this person gave equal technical status to apparently shoddy work, compared to the expensive research put into the project over a period of one year from the far more reputable and cheaper bidder, Shanghai Electric?

These questions deserve to be considered in the context of the recent disastrous, state-wide power cut caused by the Bakun Dam project. The power-cut, which happened on the hugely paid Sjotveit’s watch, caused tens of millions of dollars worth of damage at the aluminium smelting Pressmetal plant at Mukah.

In charge of the Bakun project is Trenergy’s joint venture partner, Sino Hydro.

These issues should be considered in the context of the growing list of other hugely expensive mega-projects that SEB has so predictably also handed to Taib son.  These further include. the RM90million contract to build a transmission line from Murum and other projects amounting to over USD$200million, according to the NGO The Bruno Manser Fund (BMF). 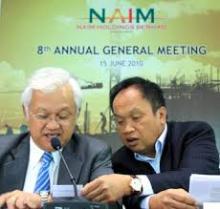 It is in the light of these  enormous contract handouts that BMF has produced scathing accusations of Torstein being “complicit” in Sarawak’s outrageous corruption.

The NGO also points out that the other major recipient of SEB contracts is Naim Cendara, the company largely owned by Taib’s cousin and proxy, Hamed Sepawi. This includes the awarding in 2009 of a USD$70million contract for the 275 kilovolt overhead transmission line project from the Bakun Dam site to Similajau.

It means that Hamed, as Chair of SEB, has handed huge contracts to a company owned by himself, with the connivance of Torstein Dale Sjotveit his CEO!

Despite denials, Sarawak Report has established that Sarawak Energy, under the control of Sjotveit and Chairman Hamed Sepawi (Taib’s own cousin) has recently borrowed a staggering RM30billion to fund these huge white elephant projects that promise virtually nothing for the ordinary people of the state.

This money will have to be repaid by the ordinary people of the state (plus hefty interest) for very many years to come in their tax and electricity bills.  Whereas Taib’s son, Abu Bekir, and proxy cousin Sepawi are picking up  billions from the contracts this money is funding, pretty much immediately, successful or not.

Speculation that the Deputy Chief Minister is expected to also have a cut in the most recent carve up of the 500kV contract is unlikely to satisfy those bill payers and taxpayers of Sarawak.