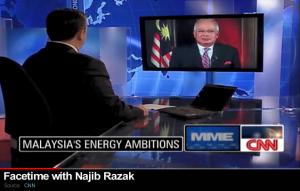 American blogger Josh Trevino’s belated confessions about the more than one million ringgit he received from Malaysian PMs Abdul Badawi and Najib Razak to attack and slander the opposition leader Anwar Ibrahim and others has left his former colleagues and bosses at FBC Media exposed.

This includes the high-profile CNN anchorman John Defterios, who was the registered President and a shareholder of FBC Media until shortly before the company folded in 2011.

Trevino has explained to one recent questioner that while the BN leaders were the ultimate clients for his invective, the system was that the PR teams at APCO and then FBC Media would supply him with the talking points and background information on Malaysian issues, which he sent on to his team of bloggers at New Ledger to work up into attacks on Anwar. 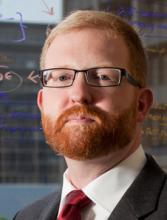 According to former US Ambassador John Malott, one of the insiders in the operation said that although he was not an expert on Malaysia, some of the stuff they sent to Trevino and that he was supposed to send on was so laughable, there was no way he would use it, “so I threw it in the trash.”

When one of his team of bloggers wrote an article that was reasonably balanced, Trevino was told that the Malaysian BN clients had reacted angrily and he was expected to fire her.

Trevino was to notify APCO and FBC Media each time one of these articles appeared in New Ledger and its related blogs, Malaysia Matters and Malaysia Watcher, so that they could alert the BN media machine to trumpet the ‘US opinion pieces’ in the official news agency Bernama, the press and across blogs they controlled.

As Malott has recorded, Trevino has now admitted that the “explicit intent” of the campaign was to “affect domestic public opinion within Malaysia proper”.

“While there was likely to be some effect on US public opinion because the articles appeared in US outlets, that was neither by design nor intent.”[Trevino]

Interestingly, Trevino is still insisting that he did not take up FBC’s lucrative offers to run the ‘piggyback’ site Sarawak Reports, commissioned by Taib Mahmud to target and discredit this site. Although he says they offered him a lot of money, he claims he turned them down.  However, the very same modus operandi of working through New Ledger (which was started by Trevino) and the same team of poison bloggers was used.

Trevino officially gave up his Malaysian activities in April 2011, just after the Sarawak election.  However, a number of commentators in the United States have been pinpointing discrepancies in his testimony so far.  The same commentators are also asking why Trevino’s team of bloggers like Christopher Badeaux have not also registered their interests, as required under the US government’s Foreign Agents Registration Act, for outpourings such as this attack directed at Sarawak Report in the blogs New Ledger? 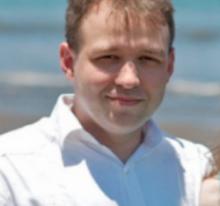 “That leads to a purely personal note. Clare — I hope I may call you Clare — I know this will come as a bit of a shock to you, but I don’t need anyone to pay me to dislike you. I dislike you just for being you… Based on my reading of your interviews and writings, you appear nostalgic for a time when the little brown people died young and painfully, because then there were more trees and bugs… I would also like to point to the fact that you have branched out from anti-human environmentalism into, amazingly, not just foreign policy but the domestic politics of a single state in Malaysia. I note that your admitted, chosen political allies are a coalition headed by a vile little anti-Semite [Anwar Ibrahim].. and a political party explicitly dedicated to enacting the cut-the-hands-off-dhimmis, women-wear- burkas brand of sh’ria. I understand that most British lefties believe that anti-Semitism is almost a positive virtue, and that socialism is fine so long as you have nice things, but I’m vaguely hopeful that the fact that you took your environmental activism as an excuse to reach out and support actual Islamists might seem, even to you, like a good reason to dislike you.  So, no, Clare. I don’t dislike you for pay. That comes from the heart”.  [Christoher Badeaux was paid $11,000 by Josh Trevino to write for New Ledger 2008-2011]

However, BN’s unscrupulous PR campaign reaches far beyond the world of negative blogging into the heart of global TV.  One of the big faces on US television, anchorman John Defterios, whom CNN has refused to investigate despite previous questions raised by Sarawak Report, is now vulnerable given his role as President of FBC Media while at the same time presenting CNN’s business shows, as well as shows on CNBC. 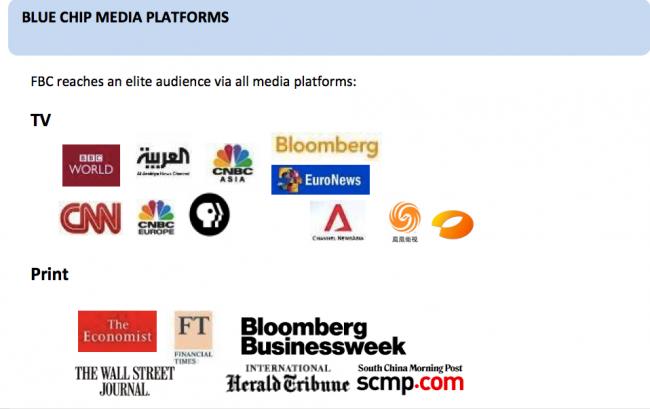 Part of a pitch by FBC Media to the government of Azerbaijan in 2011- at the time Defterios was registered President of FBC Media and was also a presenter on CNN.

US broadcast regulations are specifically clear that any staff member working on a news editorial show on US television must openly and publicly declare any interest they might have in the content.  British Broadcasting regulations managed by the regulator Ofcom, responsible for CNN and CNBC coverage in Europe, demand even more strictly that there should be no such conflict of interest within programmes, whether declared or not.

Presentation – did FBC Media President John Defterios declare these clients to the business shows he worked on?

There is no evidence that Defterios ever declared his interest when conducting interviews with FBC clients on CNN or CNBC or fronting shows that featured clients, such as Malaysia, Khazakstan and a raft of ‘blue chip clients’ that included Microsoft 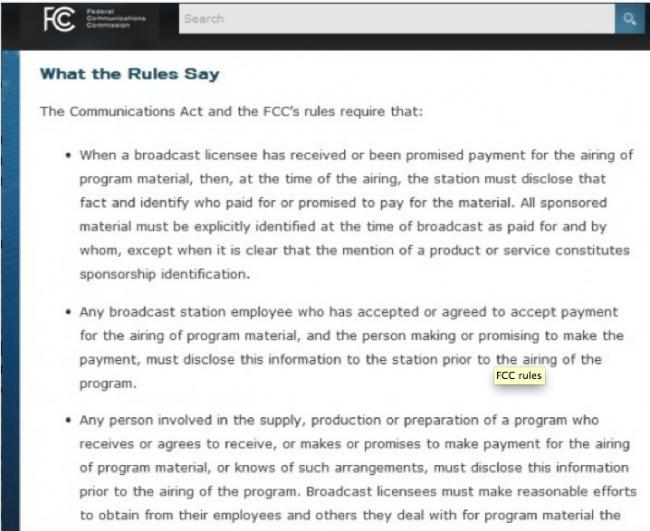 Federal Communications Commission – What the rules say. CNN has yet to address evident breaches in this code of conduct by programmes featuring business anchor and then FBC Media President, John Defterios

Sarawak Report has evidence that FBC Media clients included Ubekistan, Azerbaijan, Egypt, Malaysia, Indonesia and Khazakhstan, all governments with questionable human rights records who were looking for positive publicity on programmes commissioned from FBC by organisations including BBC World and CNBC.

The BBC has now issued an apology saying it should never have allowed major half hour documentary programmes to be commissioned from FBC Media for just one UK pound, such as occurred with the series Develop or Die, which was to a large extent funded as a covert promotional by the Malaysian Government to back its palm oil interests. 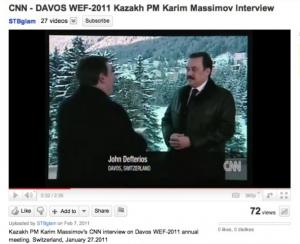 However, the station has yet to respond to information received by Sarawak Report that instead of commissioning the show in the normal way CNBC had in fact charged FBC Media over $1.5million a year for the opportunity to run this lucrative ‘platform’ for promoting its private clients.

This matter and other potentially highly serious irregularities are still being investigated by the British regulator Ofcom, which has yet to report on the matter nearly two years after the event.

The conflict of interest inherent in the two arms of FBC Media’s operations, both as a documentary programme producer and as a ‘strategic communications’ and PR company is clear from its original website, now removed from the web [click here for our copy].

Microsoft and Uzbekistan – the evidence on Defterios 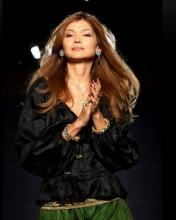 In 2009 FBC Media entered into a contract with the widely notorious daughter of the dictator of Ubekistan, Gulnara Karimova, who is famous for her blatant wealth, government positions and extraordinary self-promotion.

Further documents now show that Defterios was promoted as a central figure in a further FBC contract with the Uzbek women’s organisation SISF, which is also Chaired by Gulnara Karimova.

Since the FBC President was also at that time acting as the face of CNN’s Market Place Middle East and a correspondent for CNN International, we ask again if the interest was declared and how Defterios has justified the apparent conflicts of interest associated with his other work? 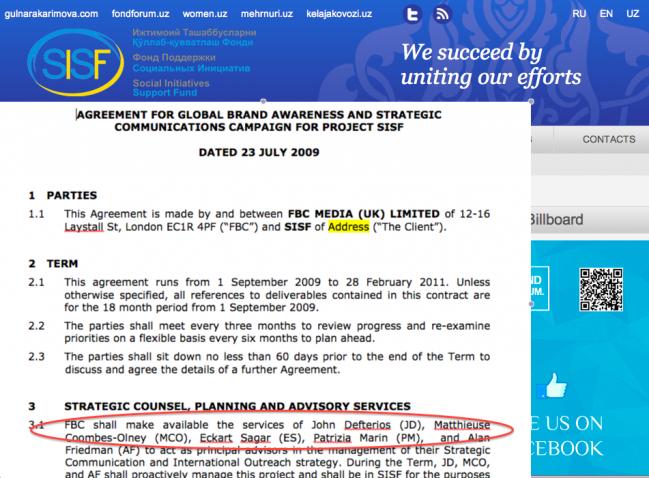 The contract, which was for 741,000 euros (around a million US dollars) which can be seen in full here, promises: 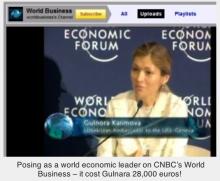 “FBC will .. provide a team of media and public affairs specialists to assist with the placement of interviews on and around summits, bi lateral meetings and events as agreed…During the Term, FBC shall produce three stories highlighting various aspects of SISF. These will be at the rate of one every six months. These stories shall be suitable for insertion into ‘World Business’ (the “Programme”) which runs on CNBC Europe, CNBC Asia, Al Arabiya and PBS. Each Story shall run between four and five minutes.”

While it is maintained that the items will be “balanced” and “include opposing views on the issues”, it makes clear that FBC Media will retain “editorial control” over the programmes that it is making for its client!

We continue to question whether CNN thinks it is acceptable to maintain an anchorman who has been prepared to covertly promote paying PR clients on programmes for which his company held editorial responsibility? 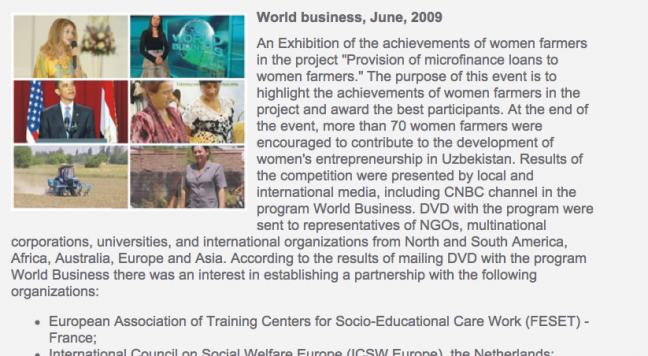 And in the latest document to come into our hands we have evidence that Defterios was engaged in personally promoting FBC’s PR services to the US top company Microsoft for a series of TV slots in 2004.

At the time Defterios was also himself presenting the show, which he continued to do until he re-joined CNN as the anchor of Market Place Middle East in 2007. 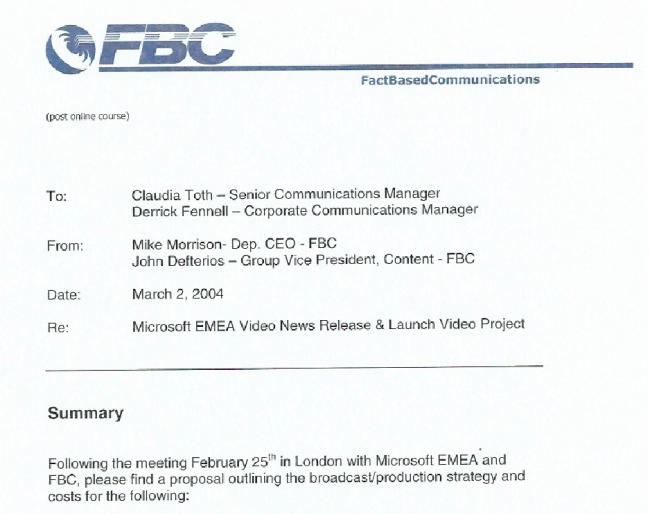 The pitch, which was taken up by the computer giant, included a ‘guaranteed distribution placement’ on World Business of a favourable film “utilising the opening of Microsoft’s research and development facility in Aachen”.  The purpose of the film is described as highlighting “Microsoft as an innovator and creator, not an acquirer of companies and facilities” and “framing Microsoft as a leader of innovation and job creation on the Continent [Europe]. 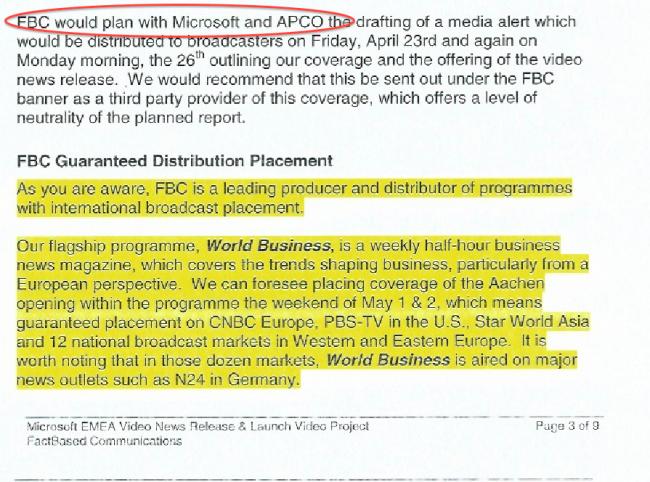 Guaranteed coverage for Microsoft on the show Defterios was presenting and had editorial control over through the production company FBC Media of which he was President and shareholder. The link with APCO extended beyond Malaysia.

The proposed promotional film duly appeared on the World Business show.  The full pitch to Microsoft can we viewed here and the film about Aachen can be seen via this link.

Another document in the possession of Sarawak Report is an FBC Media presentation called ‘Corporate Case Studies’.  This lists other major US corporations and multi-nationals, which paid for the same “guaranteed” coverage.  These include American Express; Cisco Systems; Sime Darby; Hewlett Packard; Eni and Manpower. 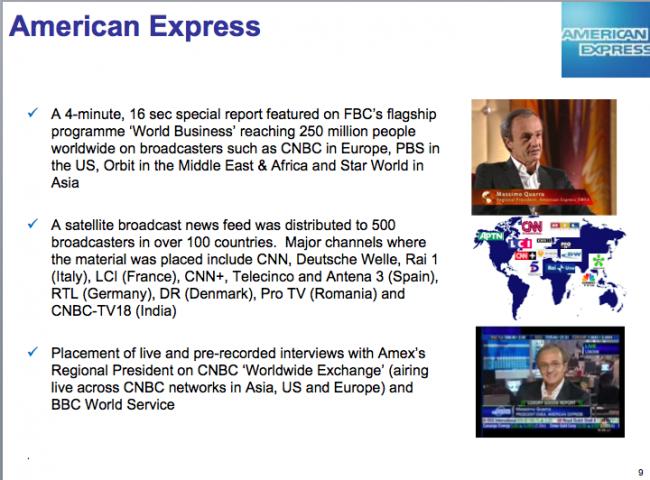 Objective business journalism? Why has CNBC refused to deny that FBC Media was paying for this broadcast platform from which it was selling slots to top brand names?

All of these companies appear to have knowingly entered arrangements with FBC Media where they paid for promotional films to be aired on a supposedly objective business show. 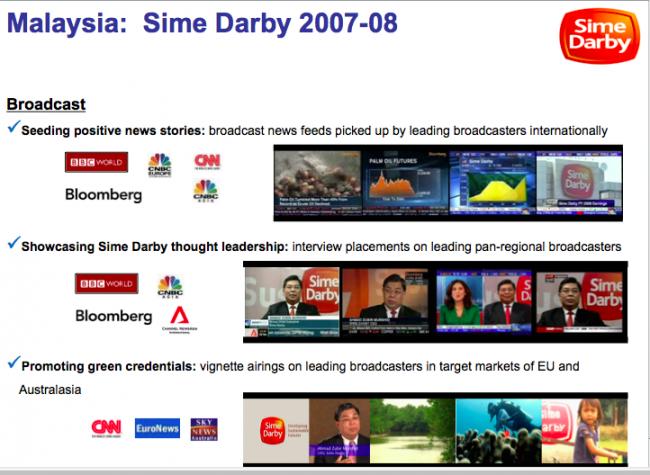 Selling ‘greenwash’ for the world’s largest and most notorious oil palm company the Malaysian government run Sime Darby, which has destroyed much of Borneo.

Now that FBC’s hired blogger Josh Trevino has been forced to detail his role in FBC’s activities to the US authorities it is surely time that this under-reported story gets taken up in the US media, which so far has failed to inform the public of the extent to which trusted programmes had been allowed by broadcasters to fall into the hands of secret sponsors. 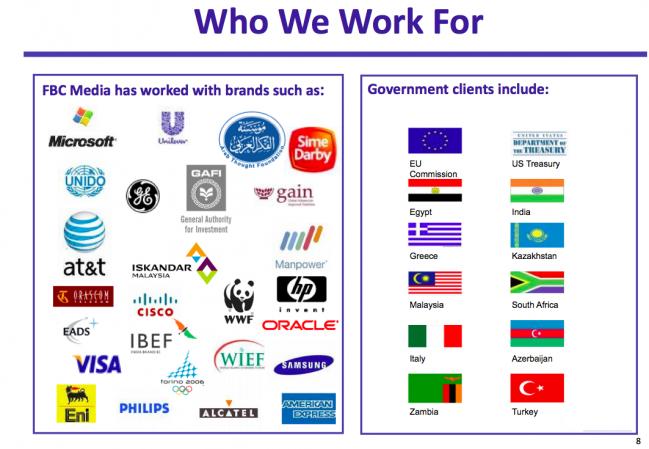 It is time questions were asked of the players in this scandal, including John Defterios, CNBC and CNN and FBC’s major corporate clients to prevent a reply of this scandal of deceptions.