Taib Conducts His Annual Raid On Timber Tycoons In Sibu 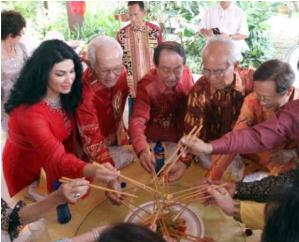 Digging in. Taib visits with empty suitcases for the purpose

One of the penalties of being a top timber tycoon is that your Chinese New Year celebrations are each year ruined by the arrival of Taib Mahmud, demanding his usual ‘Ang Pow’.

This year as Taib makes his annual descent on Sibu the Chief Minister will be demanding double dues to pay for an election that can no longer be delayed.

And of course he will want big presents for his family and hangers-on as well.

The publicity will be all about how Taib will also be making short visits to “ordinary people”, who will be expected to show themselves grateful and delighted that Sarawak’s corruption Godfather has troubled to pass by.

But, the Chief Minister’s real targets this visit are the same set of families, to whom he has handed hundreds of thousands of hectares of preferential concessions in timber and oil palm and from whom he now wants another substantial return.

He has already squeezed them hard for their privileges, of course, but he knows that without his corrupt support these tycoons would be nothing, so he can squeeze them harder still to pay BN’s election bribes. 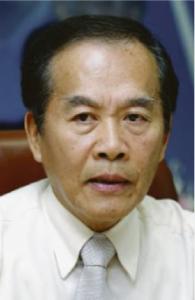 The Tiongs are a Classic Sarawak Tycoon Family – one brother in business, one brother Taib’s faithful henchman MP

The itinerary for Taib’s 3 day visit in Sibu therefore contains all the same old culprits, waiting to be milked out of cold hard cash, so that Taib’s men can go round the longhouses in coming weeks handing over notes to voters and telling them they will be damned if they do not vote BN.

According to the Borneo Post, the wealthy Lau family of KTS come first.

“He is expected to dine with the families of KTS managing director Dato Henry Lau and community leader Temenggong Vincent Lau on his first day here.”[Borneo Post]

Vincent Lau is the SUPP/BN candidate this time round and members of the family were representatives for Sibu for years, until DAP’s Wong Ho Leng spectacularly deposed them in 2010.

Ho Leng is now tragically ill, making for a crisis for DAP and Taib is clearly hoping he can get back to the system he has employed for decades, where his top timber cronies also have family members placed in key political positions, who can be relied upon to be slavishly obedient and pay the party’s expenses.

After the Laus (clutching his money bags) Taib is scheduled to move on to another even bigger player, Rimbunan Hijau’s Tiong Thai King.  Thai King is an MP and his brother is, as everyone knows, the boss of Sarawak’s biggest logging company, which has just added the state’s first on-shore oil well to all the other concessions handed to him by Taib.

That gift alone should be worth a fortune in kickbacks to BN – perhaps even enable Taib to double the level of cash bribes this year?

Tiong Thai King has of course been caught robbing his very own constituents of their NCR land. When the villagers of Sungai Pelugau came to ask for his help to prevent the company Rosebay Enterprise from cutting their trees and putting in oil palm, they found their MP to be most unresponsive. 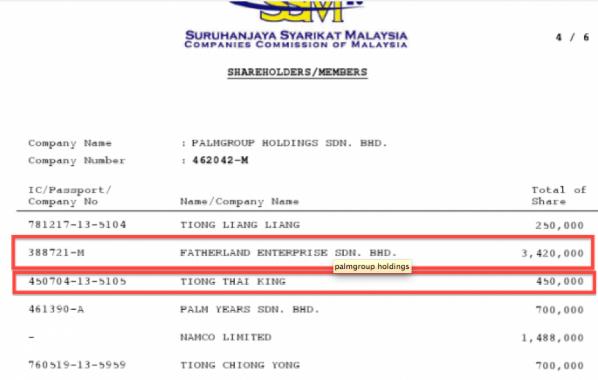 Hiding something? Rosebay Sdn Bhd is owned by Palmgroup Holdings, which is mainly owned by Fatherland Sdn Bhd, which in turn is largely owned by Tiong Thai King – the unhelpful MP for the area!

And, when the case finally came to court, thanks to opposition lawyers, it turned out that Tiong himself is the major shareholder of Rosebay!  He must be hoping that pressing a few ringgit into the hands of his voters again at this election will make up for the millions he has taken from them in terms of timber and land.

But the electorate in Sarawak is beginning to understand how it has been short-changed by families like Tiong and his tycoon brother Tiong Hiew King, who fund Taib’s election bribes in return for being left alone to act like gangsters, robbing timber and taking lands worth billions of ringgit. 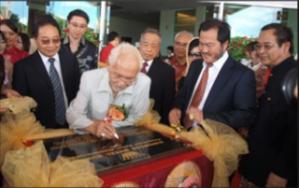 And then, of course, Taib will move on to his more recent friends, especially close to his sister Raziah, the Hii family.

Taib is scheduled to have a ‘joyful’ dinner at the Kingwood Hotel, which they own.  We have on a number of occasions detailed the extensive ties between the Hii family and Taib’s own family enterprises.

The company Mesti Bersatu, of which Taib himself is a Director and Shareholder,  jointly owns one of Sarawak’s major plantation enterprises (Delta Padi) with the Hii family’s company Fonsen Holdings Sdn Bhd.  Delta Padi was handed a huge area of valuable coastal mangrove forest by the State of Sarawak (Taib, in fact) in order to develop a rice project.  In fact, once having stripped out all the wood, it plumped for yet more oil palm instead. 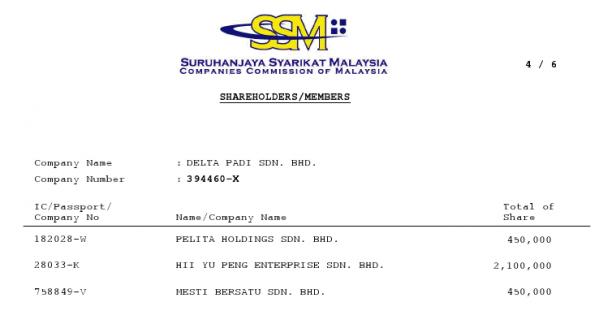 In business together – Taib’s Mesti Bersatu and the Hiis

Look at how Taib’s own Melanau people were left as a result.  The impoverished fishermen say their waters are now polluted so they can neither fish nor drink nor bath safely.  And of course their jungle is destroyed.

The Hiis have also been busy getting involved in Raziah’s construction projects in Miri.  Their enterprise Rich Venture has moved in to do the construction on projects that she just happened to get the state licences for, which makes for nice profit all round. 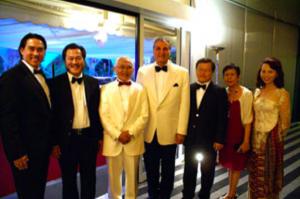 In return no surprise that the Hiis were squeezed to pay all the expenses of the brash Islamic Fashion event in Monaco, which was promoted by Raziah back in 2010.

The Hiis even provided the RM1million cheque that guest of honour Rosmah Najib was then proud to present to Prince Albert of Monaco’s ‘Environment Foundation’ at the climax of the ‘sexy show’.

The Hiis will have been doubly squeezed this year.  But, they know better than most that this is the price to pay for  all the preferences they are unfairly awarded by their key rainmaker, Taib Mahmud.

Let’s hope they don’t choke on their CNY celebrations as a result. 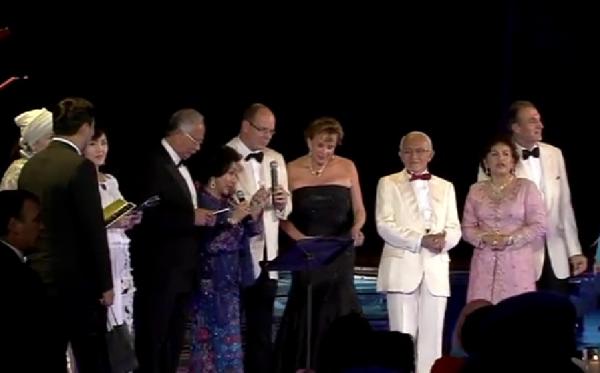