Not 'Cool' To Look A Fool - Tony Blair's PR People Behind Psy Fiasco! 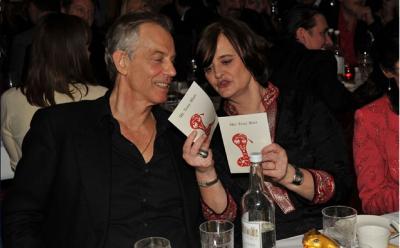 We can reveal that Najib Razak is still paying mega-bucks to Tony Blair’s PR people to try to make him look ‘cool’.

The same team which was previously employed through the criticised agencies APCO and FBC Media are now secretly consulting on BN’s election campaign, to prolong the party’s controversial half century in government.

Meanwhile, the former UK prime minister himself continues to be closely linked to Najib Razak and was recently engaged to make a speech at CIMB Bank’s launch of the ‘Asean Business Club’ in KL.

Tony’s minimum fee for such occasions is believed to be UK£300,000, so it is fortunate that the Chairman of the government-linked bank happens to be Razak’s own brother.

RM2million fee – but who paid?

The payment for Tony’s former team of advisors is likely also to be funded, as on previous occasions, through the Prime Minister’s office, despite the clear party-political purpose of the contract.

As ever, the team’s dubious boast is that they can ‘re-create the success’ of Blair’s election wins in the UK for Najib in Malaysia.

However, after rumours that it was their bright idea to book Psy for a BN stunt that badly backfired at the weekend, Najib may finally have had enough of their attempts to market him as a Malaysian version of the largely discredited former UK prime minister!

The RM2 million fee for the 7 minute performance turned into a spectacular own goal when the bumbling PM tried to rub off some of the pop star’s cool image for himself.

Introducing the show, which had predictably attracted a large young crowd to the BN event, Najib cried out if they wanted to see the Korean sensation? To which all 80,000 predictably yelled “Yes”.

But, when he then asked them if they wanted BN? all 80,000 equally predictably yelled “Noooo!“. The pop star himself, clearly more attuned to PR than Najib’s own PR advisors, then refused to cooperate and appear on stage with the PM either!

Instead of been made to look cool, Tony’s PR advisors had made Najib Razak look an expensive fool! 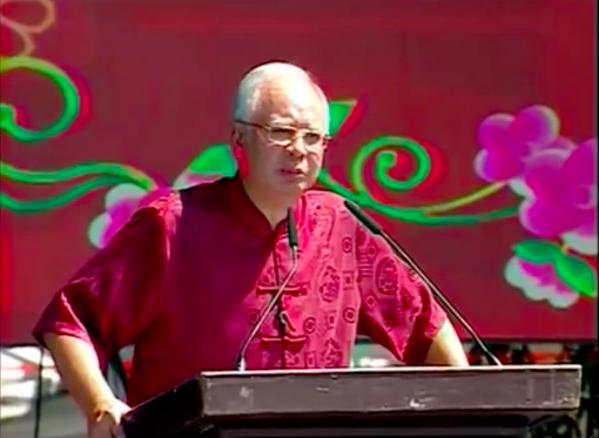 The new agency for the same old team of image consultants once with APCO is called Centreground Political Communications, based in London.

The founder and Chief Executive is Darren Murphy, who trades off his former association with Tony Blair, for whom he was a so-called special advisor while Blair was in government.

Murphy has hired a number of other former Blair advisors, who also used to work with him at APCO, where he was ‘Global Head of Worldwide Services to Government Practices’ until 2011.

These include Razi Rahman, who worked closely with FBC Media after APCO was forced out of working openly with the Malaysian Government following a torrent of bad publicity.

The narrative runs that Tony’s image team were responsible for associating their Prime Minister with a concept of “Cool Britannia”, when the PM projected himself as ‘hip’ and a popular vote catcher with the young.

In fact the concept was soon a laughing matter and Blair is now widely teased for his attempts to act the ‘ageing rocker’ clad in open neck shirts and gold chains, while he hob nobs with anyone rich enough to pay his exorbitant fees and expenses.

The other key figure at Centreground Political Communications is none other than Blair’s key advisor Jonathan Powell, who remained glued to his side throughout his period in government and who subsequently followed him into his post-political career, managing Blair’s business affairs as the head of Tony Blair Associates and also taking up key positions in his various charitable foundations. 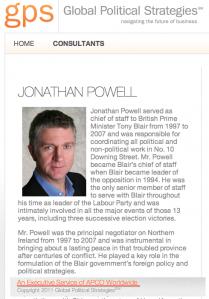 Moving on from his days at APCO – Jonathan Powell

Blair and Powell have attracted considerable adverse comment in the UK over recent years because of the blurred margins between these business and political activities, which have raised tens of millions of pounds and left Mr Blair himself extremely rich.

Jonathan Powell’s links also extend to APCO. He was on the team of consultants for the agency’s Global Political Strategies Unit, designed to advise governments, during the period that it was headed up by Darren Murphy.  Razi Rahman was also on the team and Malaysia was the key client.

Powell has now joined Murphy and Rahman as one of the ‘Core Team‘ at Centreground, all of whom flag up their former association with Tony Blair in government as their main credential for charging millions for PR advice to other governments and political leaders.

Unusually for PR agencies however, Centreground reveals nothing about its clients or its PR campaigns on any of its published websites, preferring apparently to maintain a discreet service.

According to the trade magazine PR Week, Centreground does not plan to be “a straight public affairs outfit”, but will be specialised towards the lucrative if sensitive market of advising governments:

“It is understood Murphy, a loyal Blairite, plans to link up with a number of former colleagues who share his political outlook….. It is expected that the new operation will not be a straight public affairs outfit but will instead specialise in offering campaigning advice to governments, corporates and NGOs wishing to occupy the political centre ground” [PR Week Nov 2011]

However, that Malaysia’s Najib Razak continues to remain a client need not just be guessed at through Tony’s continuing close relations with BN.  The information has leaked out through numerous avenues, not least Centreground’s own staff revelations. 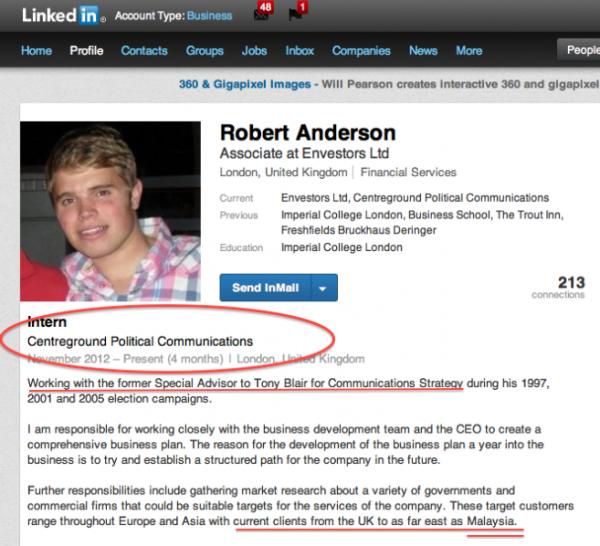 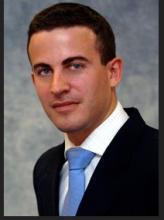 Tony’s people’s key PR contact inside KL remains the same individual from back during the controversial row over APCO.

Paul Stadlen, who represented APCO in Malaysia remains in the country as a freelance consultant, still working not only in KL it turns out, but in fact right inside the PM’s own office!

Journalists working in KL confirm that Stadlen is Najib’s key communications and international media advisor, although they say he has become secretive:

“Paul is very keen to remain in the shadows (does’t give a card or anything, which he did when he was with APCO) and all the press releases that originate from the PM’s office have Tengku Shariffuddin [press adivisor] as the contact. Quite why Najib thinks a Brit who couldn’t even handle his own PR crisis is the man to head his communications strategy is beyond me”[KL based journalist]

However, it turns out that Stadlen like Centreground staff is less discreet when it comes to Linked In, where his privileged position is bared for all to see! 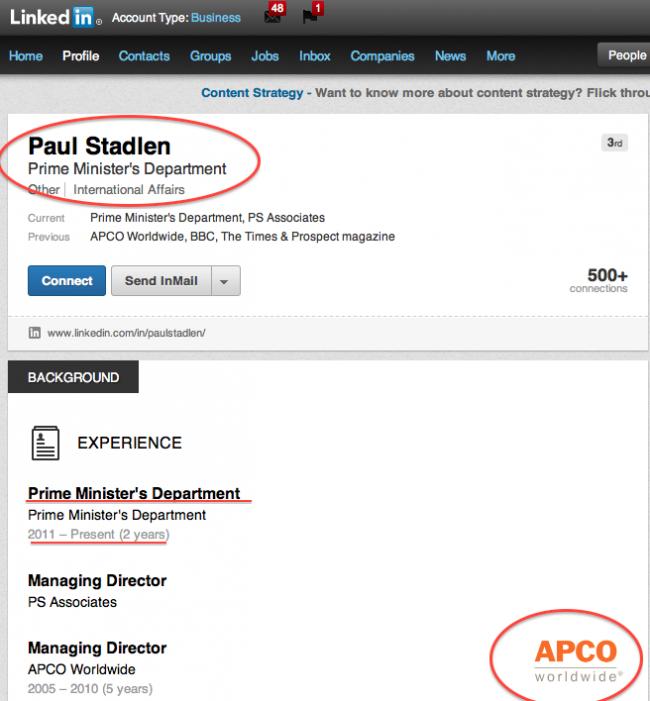 Working in the Prime Minister’s Department !

So did Stadlen and his mates back at Centreground come up with the ‘brilliant’ idea of hiring Psy, funded by a secret donor, for BN’s embarrassing Penang event, as rumours suggest? 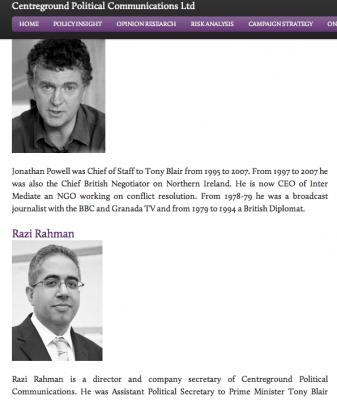 What is Malaysia paying for these Blairite image consultants?

In which case it is time to request more openness about how much taxpayers are funding Stadlen’s activities on this occasion and indeed the activities of Centreground?

Last year Sarawak Report was able to reveal that FBC Media had received a staggering RM84 million for its own botched and illegal campaign promoting Najib on international news programmes.  The money was paid out of the PM office budget.

The opposition PKR had earlier exposed how the Blair linked team of advisors had been paid a fortune while at APCO.  Stadlen himself was paid USD$420,000 for a 6 month contract in 2009.

So, we ask how much is it this time that Malaysian taxpayers are paying for this same group of image merchants and what more stunts are in store after millions were shelled out on Psy, who made his name out of free downloads from You Tube?

An association that benefits neither party

Meanwhile, the revelations about his continuing connections with BN’s discredited regime in Malaysia will do nothing for Tony Blair’s already tarnished image back in the UK.  The days of this former PM’s once promoted ‘ethical foreign policy’ recede each time that another of his contacts with some of the world’s least respected global figures are revealed.

Najib has joined a list that includes Kazakhstan’s Nazarbayev, Gadafi and Rawanda’s Paul Kagame. Neither Najib nor Blair benefit from the association, PR-wise that is…. 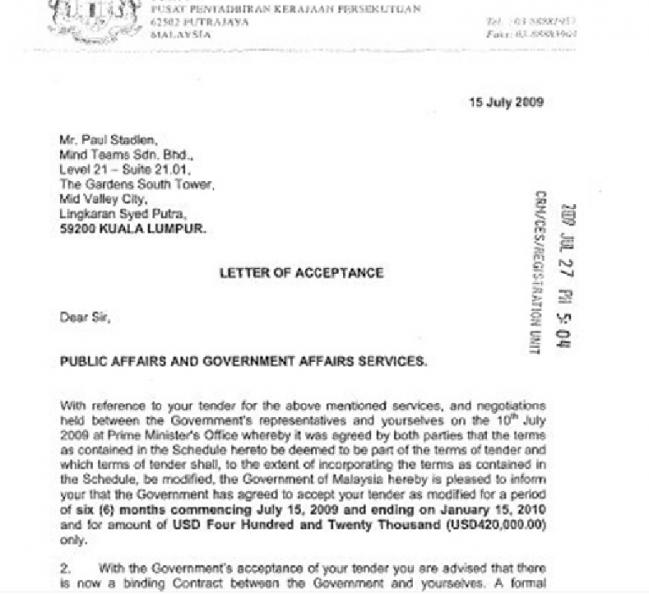