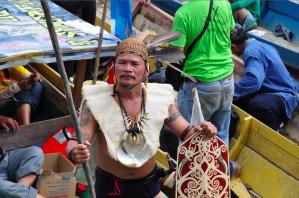 Tamper with our river at your peril Taib! – Demonstrators against the dam during last weeks ‘Baram Wave’

At the last Federal Election Taib did not bother to visit Baram.

To him it was just a source of timber which he could exploit, handing vast logging concessions to his crony companies like Samling and to politicians he needed to control, while leaving the people destitute.

One such politician was Jacob Sagan, the local MP and Federal Deputy Trade & Industry Minister.

Jacob has been Taib’s obedient henchman representing the Baram seat for three elections under SPDP and he has proved willing to betray his people to serve his master on every occasion.

Sagan has even been willing to put his support behind Taib’s greatest insult so far to the people of Baram, his announcement of the Baram Dam! 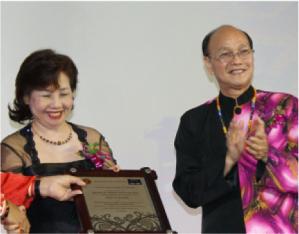 However, just as Sagan was singing the praises of this dreadful plan, which will wash away countless homes and villages, including the place he was born, Sarawak Report exposed his rich rewards from the Chief Minister.

We revealed last year how the treacherous MP has secretly received millions of ringgit of valuable belian concessions taken right from within his own region.

Not only that, a construction company called Dema Tega, owned by him, his wife, and his sister-in-law has further received over RM60million in state contracts!

Yet, while the Sagan family has got mega-rich, his abandoned constituents have been left to fend for themselves against plans to flood and destroy their ancient homelands and ruin yet more of the rainforest.

Little surprise that they are turning in droves to the opposition PKR politicians like Roland Engan, whose party has promised to put an immediate stop to Sarawak’s dam project. 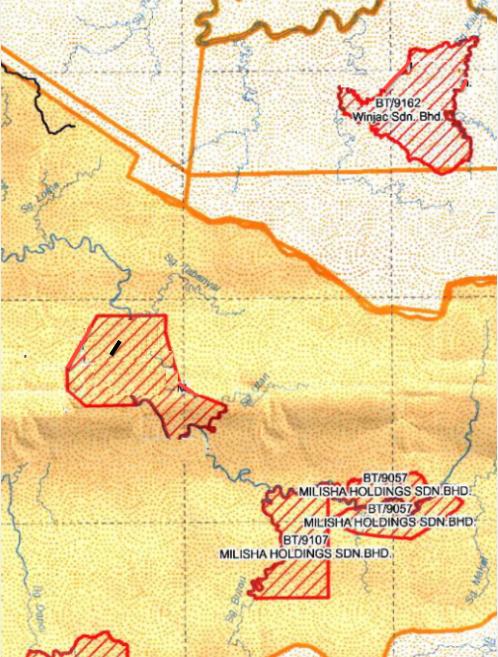 Sagan has tried denying the corruption behind his failure to protect his people from SCORE, however even the Baram River could not wash away the evidence of his guilt.

The couple’s companies Winjac and Milisha Sdn Bhd are clearly recorded as the recipients of these belian concessions by leaked Forest Department maps (which should be public information).  Hundreds of hectares of this endangered hardwood species have gone to this greedy MP in the name of himself, his wife and his daughter. 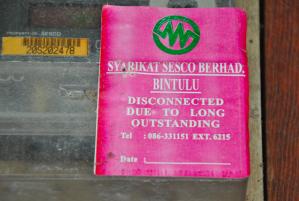 Outside a poor home near Bakun – What is the point of having a dam built across your river when you can’t even benefit from the electricity?

The result has been a huge rumbling of discontent across the region, as the people’s seemingly endless patience over the abuse and plunder of their lands has finally run out.

The revolt has rippled through all the different communities along the banks of the Baram. For years the Chief Minister had succeeded in controlling and dividing them, but the Dam has turned them into one united movement against BN.

Campaigners like Save Sarawak Rivers have collected major petitions and mounted public protests and the changing tide of political support has been termed the ‘Baram Wave’.

At first Sagan, his party boss William Mawan and Taib thought they could ignore the anger, especially after they decided to delay Baram until safely after the coming federal election.  But, the protests have continued and it seems suddenly Sagan and Taib have realised they are in political danger. 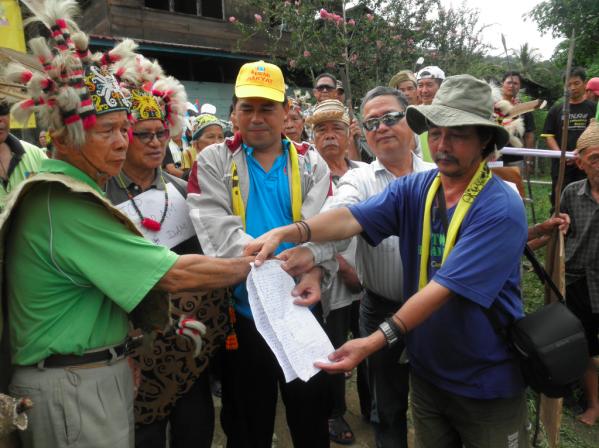 Petitions – for the first time local people have dared speak out against BN and to talk about supporting a new government – they do it every day on Radio Free Sarawak!

PKR, Engan and local NGOs like Save Rivers have campaigned tirelessly against the dam for months and it has become clear that the people of Baram do not believe BN’s promises for SCORE, but are rather putting their trust in the opposition promise to cancel the whole project!

Last week’s Baram Wave demonstration saw a growing flotilla of over 40 boats descending the river, flying flags for the opposition! 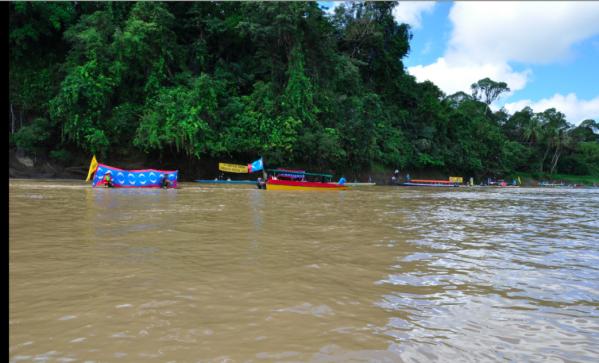 Baram Wave flotilla – the local people have seen a solution in the opposition’s pledge to cancel the dam!

Evidence, if it was needed, is heard every day on the only free media in Sarawak, Radio Free Sarawak (RFS on shortwave) where ordinary folk, as well as head men and prominent figures, have felt brave enough to say “Boo!” to  Taib Mahmud and his yes man Jacob Sagan and their plans to flood the Baram region. 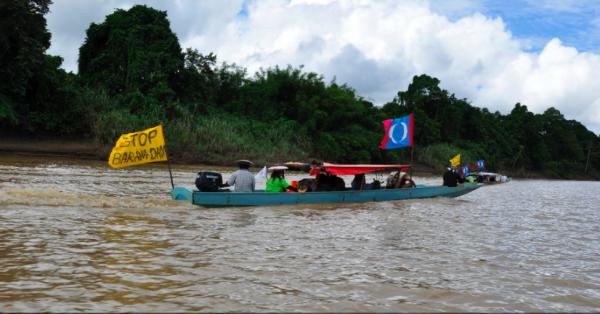 Taib to alight from his helicopter!

So, now we hear that Taib Mahmud, Chief Minister of Sarawak, has made a momentus decision. 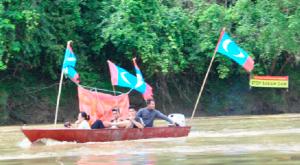 PKR flags are a common sight on the Baram River – too late for Taib to pretend he is cancelling the dam?

Realising that he has miscalculated horribly and is facing a complete crisis in Baram, he has announced that he will drag himself into one of his helicopters and take himself up to Baram after all these years, in order (he hopes) to rescue this dreadful situation.

The date of the seafarer’s arrival is scheduled for 23rd February.

Might we suggest that it is far too late to woo the river people and also that the old dictator is far too arrogant to commit himself to the one thing which will satisfy them, which is the cancelling of his grand plans?

Yet it is clear that Taib thinks that by at last deigning to visit Baram his great presence will solve all problems.  He has told himself that he can convince local listeners that he is their caring leader after all.  But, the truth is they know that he is only coming because he is desperate.

“What will he do?”, asked one villager last week.  “Will he make promises or just offer money?  Or will he pretend to cancel the dam altogether, because we know he will take his revenge after the election and enforce it anyway!” 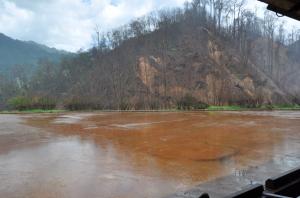 Stinking sludge has clogged the Balui river owing to the Bakun Dam, forcing the evacuation of workers

Taib’s biggest problem is that the Baram people now have examples of how the Chief Minister has treated other communities affected by dams.

The people in Batang Ai have yet to receive proper compensation 30 years on, let alone the people of Bakun, who have been stranded in Sungai Asap’s refugee camp for over a decade.

And what about the environmental consequences of having a fruitful river turned into a blocked up drain?

The community of the Balui River tributary of the Baram Basin have had their own experience of the Bakun disaster.

Last week sludge from Bakun’s now stinking lake backed up into their own waters and the smell and pollution was so terrible they had to evacuate the area. 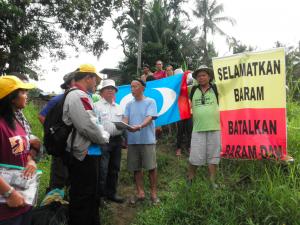 Informing the local people – NGOs have been in action for months in Baram, but it is only now that Taib is bothering to come!

Scientists say that the smell of Bakun could continue for a century (meaning for as long as the dam is functioning).  This pollution has already long since killed the fish and animals of the river.

And all this because Taib Mahmud is under the impression that he could make himself richer by damming up Sarawak’s rivers and building even more factories owned by his family.

So, what kind of a welcome do we think Taib Mahmud will get in Baram on February 23rd if he ever dares make that visit and how many police will he send into the area first?

Taib certainly has a crisis on his hands in Baram, but it seems he does not understand the half of it.