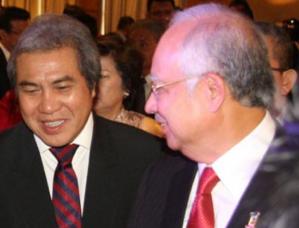 Tengah is planning to betray his boss – but is he KL’s man?

Sarawak Report has received an explosive dossier from sources close to Taib, detailing a powerful conspiracy to depose the Chief Minister at the next PBB Party Convention, due in May.

The high-level defectors will maintain a pretence of unity during the coming federal election, expected in March, but have collected enough supporters to supplant Taib with the Planning Minister, Awang Tengah, say loyalists, who include members of Taib’s own close family.

They have passed the information to Sarawak Report “in desperation”, it is alleged, to publicise what they call an advanced plot, which the ageing Chief Minister has yet to take seriously:

“Currently, Tengah has control over 14 PBB Aduns (including his own seat), 6 PRS Aduns, 5 Former SPDP Aduns (BN 5 Club) and 5 SUPP Aduns; and until today he still trying to influence other Aduns that are loyal to Taib Mahmud and Abang Jo to join his camp. He controls these Aduns by giving them lands, permits, contracts, cash and promising position in the next Tengah new government.”[inside source]

Betrayal by a key henchman threatens Taib from within

Tengah has ‘promised’ Speaker Mohd Asfia the position of Governor

The leader of the plot is none other than Taib’s own protege Awang Tengah, say the whistleblowers, who claim he has been using his key position of Second Minister for Planning, Resources and Environment (after Taib) to build up a huge war chest and power base.

Tengah, who has held his lucrative ministerial brief for the best part of the last 20 years, is acknowledged to be immensely rich and he has exploited his position to extract concessions and kickbacks as well as to distribute favours, including contracts and concessions.

Through this method it appears he has won over other key Taib loyalists, including the Speaker, Mohd Asfia Awang Nassar, to whom he has promised the coveted position of Governor of Sarawak, and the Sarawak State Secretary,

Mohamad Morshidi Abdul Ghani, who is the top civil servant in the state.

Even more alarming is the evidence that Tengah has been disbursing enormous sums to build up a ‘Blue Army’ of PBB Youth, whom he plans to use as a show of strength at the time of his internal coup.

The leader of these growing ranks of thousands of paid male supporters is the thuggish Radin Kadri Radin Budiman, of the PBB Youth Executive Wing, who has allegedly received  RM10million from Tengah to recruit PBB Youth leaders in all levels throughout Sarawak.

“Many people have witnessed Radin entering and exiting Tengah’s office at Wisma Sumber Alam many times. And recently, Tengah has given Radin RM10 Millions to recruit PBB Youth leaders in all levels throughout Sarawak. Radin, who is seen as a mole in Taib group, has been recently behaving so arrogant and boastful, because he has many youth boys in Sarawak behind him. He feels that he is strong in PBB youth movement because he knows Tengah is politically and financially behind him”[inside source]

The writers also express concern at perceived links between this growing strong arm group and Sibu based gangsters, who are known to create widespread fear and intimidation in Sarawak. 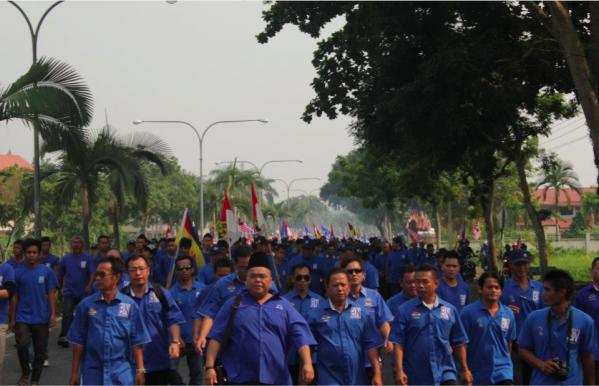 The compilers of the dossier, which has so far been handed exclusively to Sarawak Report, have also provided a comprehensive list of the 30 BN defectors, who they say have entered into the plot with Awang Tengah to vote Taib out at the Party Convention.

Many of them, who were all once considered ultra-loyalists like Tengah himself, are said to be motivated by ambition, greed and the obligation for services rendered. The list includes PRS leader James Masing, who appears to have been promised the position of Deputy CM 1 in return for bringing his 6 PRS Assemblymen over to Tengah; the so-called ‘BN 5 Club’ and Lee Kim Shin, the Senadin YB who has brought with him members from the declining SUPP in return for being DCM 2.

According to the dossier handed to us by supporters of Taib, which include members of his family

The widespread feeling in BN is clearly that the ageing Chief Minister’s time is over, hence the jostling for places in the new order.  There seems sparse sentiment from these former Taib lackeys for their original paymaster. The list provided in the dossier is as follows:

The dossier also details those who are believed to still be loyal to Taib, however it points out that they are now perilously outnumbered.

“Malcolm Mussen Lamoh (Batang Ai) and Liwan Lagang (Belaga) from PRS, William Mawan (Pakan) from SPDP, Wong Soon Koh (Bawang Assan) from SUPP, George Lagong (Pelagus) from Independence and all PBB Aduns that are not mentioned above are loyal to Taib. And therefore, Taib only has 26 Aduns that are loyal to him”[inside dossier] 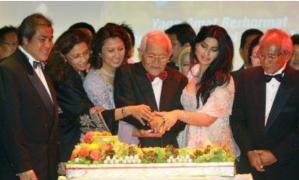 Betrayal from within? Tengah lines up with the inner family and DCM Jabu as a trusted insider on the old man’s birthday

The report argues that Tengah’s bid is based on his perceived appeal as a ‘local boy’ compared to the other main rival to succeed Taib, the State Housing Minister, Abang Johari.

Johari is believed to be supported by KL and is considered a more attractive figure by many in BN, in that he is not tainted with such blatant corruption as the likes of Awang Tengah.

However, at the bottom of the plot is straight bribery it is alleged.

The key bankroller behind the operation is supposed to be the man described as Tengah’s “closed business partner”, Lau Boon Soon.  It is alleged that Lau is Tengah’s ‘Chief Broker’ in selling lands acquired through his ministry from the state and that it is he that is paying up to 5 million ringgit to Assemblymen who desert Taib!

“Tengah’s closed business partner; Lau Boon Soon is acting on behalf of Tengah (Chief Broker) to sell all the state lands; he boasts around that he is the kingpin and he can get approval from Tengah. He uses Tengah companies to sell all the state lands and close the deals for Tengah. He is also owed 25 Million Ringgit from Casinos in Macau, Singapore and Genting, Malaysia. Lau Boon Soon is also responsible for paying between 3 to 5 Million Ringgit to the Former SPDP Aduns (BN 5 Club) to leave William Mawan and SPDP; and join Tengah camp (Source: Taib Close Inner Circle).”[from the dossier]

The writers of the report point out that the other main rival to Tengah, Adenan Satem is gravely ill and that many of those who would once have supported him have now defected to Tengah.

A carefully constructed noose around Taib

The danger of this alleged plot against Taib is indicated by the the number of key members of the Chief Minister’s inner circle who appear to have deserted him.

Not only has his once trusted henchman Tengah become chief enemy, it appears, along with his ever-obedient Speaker, but his own Political Secretary Abdullah Saidol is also listed amongst the leading plotters.

Saidol replaced Asfia in his Semop seat after Taib dropped him as a YB at the last state election, but is in fact said to remain very close to Asfia and to Tengah, who had both nominated him for the seat.

The dossier claims that Tengah is funding Saidol to forward his campaign and develop a cyber unit to counter critics! 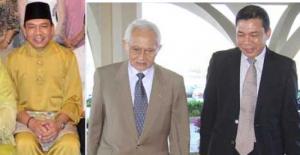 Disloyal? Even Taib’s private secretary, Mustapha Han is said to be siding with Awang Tengah

Another person in a position of key trust who is believed to have crossed over to the conspirators is Taib’s own private secretary, described as his gate-keeper and the controller of his diary, Mustapa Han.

The dossier says Taib’s loyal circle are particularly anxious that Han is using the position to disrupt the Chief Minister’s communications with the people who really support him and also his relationship with the Central Government in KL.

“Datu Mustapa Han is noted for being a very close ally to Tengah and Raziah Mahmud, and he is also publicly known as “Chief Clerk” to Taib. Since he was appointed as Senior Private Secretary to Taib, he has always blocked Taib friends, loyalists, relatives and even Taib own siblings from making appointments to see Taib in the office. And most of the time, he is only allowing people who benefit himself, Tengah and Raziah Mahmud. This is because Datu Mustapa is in charge in making all appointments for Taib and organizing Taib diary”[extract from dossier]

Taib loyalists, who are flagging up the danger of this alleged plot by Awang Tengah, say their main concern is that the secret traitor is an even greedier and more rapacious individual than Taib himself. Tengah was nurtured by Taib and has adopted all his corrupted methods with a vengeance, they say and if he takes the reins of power he will suck Sarawak dry in his efforts to become as rich and powerful as his mentor:

“If Taib loves Sarawak, loves his people and loves his family, he must wake up from his dream and remove all the parasites from his government. For the sake of Sarawak interest, we are begging him to remove all the parasites like Awang Tengah, Abdullah Saidol, Mustapa Han, Morshidi Ghani, Radin Kadri and others. We admit we mades mistake for the past 32 years, we feel regret and we are sorry. But, we love Sarawak and its people; and we don’t want in the future for Sarawak to be a worse place to live for all the Sarawakian. We the people, concerned citizens of Sarawak don’t want Sarawak in the situation of out from the tiger’s mouth, into the crocodile’s mouth.” (Source: Taib Siblings)”[from the dossier]

The supporters of Taib seem to think that it is better to stick with the old man, who is the “Devil we all know” rather than have power taken by his rapacious protege, who has acted with such betrayal.

However, others in Sarawak are arguing as the election approaches that a better solution would be to get of BN altogether, particularly since Taib must indeed soon depart from office.

What better time could there be to vote for an opposition coalition that has pledged to bring open government; return the native lands to the people and to end corruption, cronyism and the abuse of office?