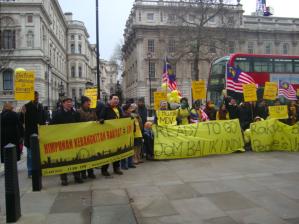 Outside Downing Street – the message to the British PM is that Malaysian expect free elections too, not rigged elections.

Inspired by news that half a million people had successfully made their point earlier in the day in the Merdeka Stadium and all over KL, a solid troupe of Malaysian nationals braved the cold snap to march from Trafalgar Square to Downing Street and then the Westminster Parliament today.

They waved banners and flags, chanted calls for clean elections and read out the speech by Bersih’s Ambiga Sreenevasen calling for Malaysian nationals abroad to return for the election and help participate in observing the elections – the so-called ‘Citizen Election Observers’.

The cheerful group were accompanied by a couple of low key police officers, who came in very handy in holding back the traffic as they crowded into Whitehall.

The demonstrators were particularly pleased and happy that the news had come through of similar police restraint in KL, proving that a peaceful demonstration can go off without incident as long as the ‘forces of law and order’ have not been encouraged to get tough and beat people up. 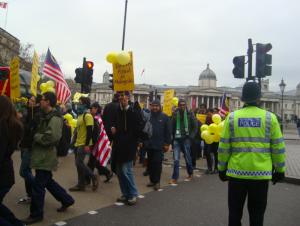 Message to the British Government

The posters being waved signalled a very simple series of messages, which British official observers would do well to consider.

Britain and Malaysia have been visibly cosying up over the past several months, notably since the current government arrived in Downing Street.

It is a deliberate policy that would appear to suit interests on both sides.  Najib is looking for international credibility, while the British are seeking lucrative foreign deals to help make up for a  floundering economic strategy.

The UK Prime Minister, David Cameron put it this way when he hastened out to Malaysia last year:

“This is the first time that a British Prime Minister has come to Malaysia in almost 20 years. It has been a period, as you have charitably put it Prime Minister, of benign neglect, and I am determined to put that right. So, my message today is very simple: the era of benign neglect is over. Britain is back: back to do business with Malaysia, back to build our partnership on vital global issues. We started that conversation in Downing Street with your visit, we’ve continued it today, and it is just the start of a much refreshed and reinvigorated relationship that we both want to see between our two countries”.[David Cameron, speaking in Kuala Lumpur 12/4/2012] 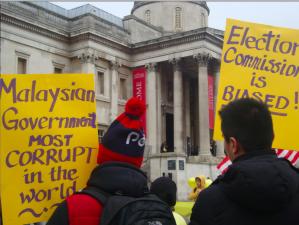 Don’t do deals with a dirty government.

Part of this ‘much refreshed and reinvigorated relationship’ appears to focus on a bi-lateral arms deal being negotiated by BAE systems for the sale of Typhoon Jets.

It is a deal that may be sweetened by the gift of a significant number of second hand jets being retired from the Royal Airforce, as part of a series of UK Defence cutbacks that have less than delighted many in the armed services.

A Free Trade agreement is also being negotiated with the European Union and clearly other bi-lateral deals are being aggressively pursued by the British as well and they are throwing everything they can at the project.

Visits by politicians, visits by Royalty and return visits too, according to Britain’s High Commissioner:

“It has certainly been a significant year for Ministerial visits, which I gather were pretty rare at Cabinet level during the terms of office of my predecessors but are now well and truly back on the agenda. Prime Minister Najib and five senior Cabinet members visited the UK last July as a guest of the British government. This was reciprocated only 9 months later by the visit in April by Prime Minister Cameron with the Trade and Higher Education Ministers and 35 business people. We have also had visits here by the Defence Secretary, Gerald Howarth (twice), Lord Green, and by Baroness Warsi, the Cabinet Minister and co-Chairman of the Conservative Party. In the opposite direction there was a second visit to the UK by Prime Minister Najib last month, and several other Cabinet ministers have visited including Foreign Minister Anifah. In the immediate future I know that at least two senior Malaysian Ministers will be visiting the Farnborough Airshow in the UK next month. The last twelve months have also seen an unprecedented number of Royal visits in both directions..”[ Simon Featherstone, British High Commissioner 26/6/2012]. 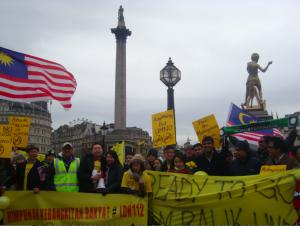 By Nelson’s column – Malaysians want the same freedoms as the British, supposedly guaranteed by the British at independence.

Today’s message was clear enough from the Malaysian marchers in London. Deals with the BN government should not come at the expense of the freedom and good government of the Malaysian people.

If the UK stands accused of ignoring Malaysia’s rampant corruption as it stampedes to do business again, the banners were reminders of other issues that negotiators and diplomats should be raising.

“Widespread Election Fraud In Malaysia”; “Malaysian Government Most Corrupt In the World”; “Free The Malaysian Press”; “Clean The Electoral Roll” were just some of the blunt statements.

The same matters will be raised again in the British Parliament next week, when the NGO Suaram and clean elections campaigner, Ambiga Sreenevasen will be meeting decision-makers and MPs and informing them about Malaysia’s growing democracy deficit and corruption index. 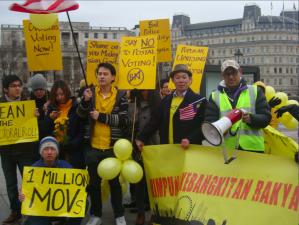 What is the UK doing to encourage election monitoring in Malaysia?

Britain’s previous period of cosy trade with Malaysia ended with the Pergau Dam “Arms for Aid” scandal, a deal between the then Defence Minister, one Najib Razak, and a number of current high-profile conservatives.

It is a cautionary episode that the British would do well to keep in mind and a new book has just been published, detailing the whole blundering affair.

The same Najib Razak, now Prime Minister, was also of course the man involved in pulling together the Scorpene Submarine deal that is now enmeshed in a hundred million euro kickback and murder scandal, currently being examined in a court case in France.

History suggests the UK might do well to tread more carefully and less eagerly when it comes to trading relations with the country that has now reached Number 3 in the illegal capital outflow index and to listen harder to the calls for freedom and democracy from the people who want to clean up their government.