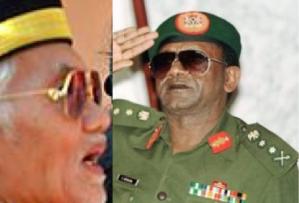 “like the Abacha family” – the Swiss MPs want the Taib assets frozen under criminal law.

Swiss Federal MPs have united in a damning motion placed before Parliament, demanding their authorities freeze the Taib family’s assets in Switzerland, so that they can eventually be returned to the Sarawak people.

The motion, signed by a significant number of 22 MPs, likens Taib to the notorious African President Sani Abacha, who looted $5 billion from Nigeria before dying from a viagra over-dose in 2011.

The description of Taib by the Swiss MPs sums up their open disgust at his abuse of power and rapacious plunder of his people’s wealth.

“He [Taib] has abused his public office in a spectacular way to illicitly enrich himself, his family members and his political cronies through corruption, abuse of office and the establishment of a number of monopolies held by his family members and cronies. Research by non-governmental organizations has shown that the Taib family holds stakes in over 400 companies in 25 countries and offshore finance centers. The Taib family assets have been estimated at over 20 billion Swiss franks. A large part of Taib’s illicit assets have been acquired in the context of the illegal logging of tropical rainforests of Borneo and the export of tropical timbers”.[Motion 12.4251 For the forfeiture of potentate Taib’s assets in Switzerland – 14/Jan/2012]

It must be said that few incumbent heads of state have been shamed by such open public criticism from members of a foreign government and this document sums up the embarrassment that Taib has now become to Malaysia.

The motion, filed today (Monday 14th January) is accompanied by an official criminal complaint to the Swiss Attorney General, sent by the MP Carlo Sommaruga, who has been at the forefront of publicising concerns about Taib in Switzerland.

In it he describes the Taib family as “Malaysian public figures who are acting as part of a criminal organisation” and requires the government to declare that:

“Mr. Abdul Taib bin Mahmud, called “Taib”, and the members of his family and entourage, has formed and is part of a criminal organisation as defined by article 260 of the Swiss Criminal Code”.

He demands their assets should therefore be confiscated under Article 72 of the same code in the same way that Abacha’s assets were frozen. 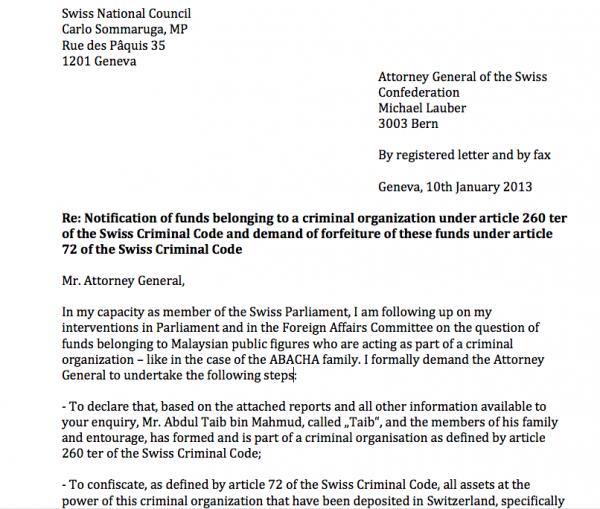 As the latest evidence of Taib and his family’s likely assets in Switzerland, Somarruga refers to the recent divorce case in Kuala Lumpur between the Chief Minister’s son and his estranged first wife Shahnaz.

In their motion the MPs point out “a family member stated in October 2012 under oath in a Malaysian Court that Taib family assets worth over 100 million US dollars are being held in Switzerland or on overseas counts of Swiss financial service providers”.

Shanaz’s testimony, which has also been corroborated to Sarawak Report by separate investigators, was that:

“He has personal accounts in Canada, the US, the Caribbean, France, Monaco, Switzerland, Luxembourg, Malaysia, Hong Kong and Switzerland,”

“My claim of RM100 million in mutaah (gift) is small as he is worth in excess of RM1 billion. The RM100 million can be said to be worth 10 sen to him.

“Eight personal accounts are under her husband’s name at the Safra Bank in Monaco with deposits amounting to US$38.3 million.

“Besides this, he also has seven bank accounts under the Union Bank Switzerland with deposits of US$27 million, and another account under HSBC Bank in Jersey which he may have withdrawn,” she said.

“These add up to deposits of up to US$159 million or an equivalent to RM588.67 million”. [Shahnaz Abdul Majid]

South East Asia’s richest father-in-law – Shahnaz also wants RM121million to pay for 2 years child support for her son. This to include two Aston Martin motor cars and RM72,000 in ‘pocket money’ for the boy, who is at boarding school in the UK.

While giving her testimony the Chief Minister’s daughter-in-law also confirmed what many including Sarawak Report have long concluded.  She described Taib as the richest man in Malaysia, if not South East Asia, given his rampant exploitation of the resources of the state.

That allegation did not escape the horrified onlookers in Switzerland, who fear that much of the profit of the illegal destruction of the Borneo Rainforest may lie protected by their own banking system.

These MPs clearly hope that if they cannot repair the destruction of Sarawak’s rainforest they would at least be able to ensure the profits are returned to help the people of Sarawak, whose lives have been blighted by the greed and destruction of their greedy ruler over the past 30 years.

The issue has already been reported in the top Swiss paper Sonntagszeitung.  For a translation click HERE.

As the story appeared in yesterday’s Sonntagszeitung.