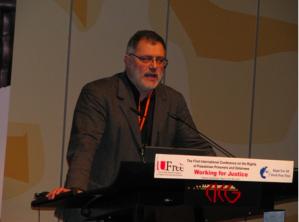 Taib Mahmud has kept largely silent over the growing uproar about his vast illegal wealth.

However, last year he broke this silence by declaring in the Dun Assembly itself that the news that the Swiss President had agreed to start a formal investigation into his possible assets in Switzerland was a malicious lie:

“Let me state categorically that I have no secret Swiss bank account, nor assets or investments of any description. None whatsoever”.[Taib 22nd June 2011]

Given this rare, but categorical denial, what are we to make of the recent statement by the Swiss Federal Council in reply to questions by the MP Carlo Sommaruga?  The Swiss MP had asked the following question:

Question: “In April 2011, former Federal Councillor Micheline Calmy-Rey forwarded an inquiry from the Bruno Manser Fund on PEP assets held by the Taib family to FINMA. What action did FINMA take? Is the Federal Council prepared to freeze possible Taib assets in Switzerland?”[MP Sommaruga Carlo, 03 May 2012]

The written response took considerable time and it was extremely carefully worded, in recognition of Switzerland’s world famous banking secrecy laws.  However, the wording does little to back up Taib’s protestations:

Answer: “Because of official secrecy, it is not possible to release information on the outcomes of such examinations in specific cases. As to the possibility of freezing the Taib assets by the Federal Council, reference is made to Answer 4.”

Consider this careful wording.  They could have referred to ‘alleged assets’, or ‘possible assets’, or ‘any assets’, however they chose to refer to “The Taib Assets“!

The significance of the reference to ‘Answer 4′ is that it explains that the freezing of an individual’s bank account usually only happens on request from their country of origin, although it states:

“at the moment such a situation does not exist with Malaysia”.

Lucky Musa and lucky Taib!  Their friends in BN are refusing to act on behalf of the people of Sarawak and Sabah, whose money has been stolen, by asking the Swiss authorities to freeze the assets of these two ‘politically exposed persons’. 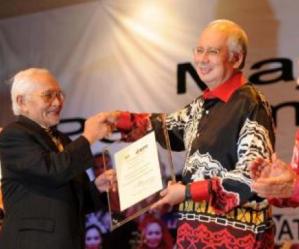 Helping hand – PM has come in to tell people not to “bother” about Taib’s billions!

After all, only today, the PM Najib Razak has come out in his usual bumbling way to defend Taib and say that people really should not “bother” about this whole issue of him being a multi-billionaire, who has become Malaysia’s richest man at the expense of his people!:

“There are all kinds of allegations, don’t be bothered about it (jangan kita layan),”[Malaysiakini]

The bumbling PM may find at the up-coming election that others do in fact bother about it very much indeed.

Pudgy, wealthy BN leaders may have accepted the corruption of their Federal and State Ministers as part of the necessary apparatus for keeping their party in power and enabling their own corrupt practices.  But judging by the reaction over the past days, most Malaysians are infuriated that the likes of Taib and Musa have been gorging themselves on the wealth of Sarawak and Sabah, while leaving the vast majority of the people there impoverished and with DECLINING not improving standards of living!

This latest answer by the Swiss authorities will do little to reassure the people of Sarawak that some of those billions taken by Taib Mahmud are not in fact safely tucked away in the mountains of Switzerland near all the world’s top sanatoriums, which specialise so expensively in the care of elderly multi-billionaires.

So, could Taib please demand that the Swiss do a little better on his behalf and issue a categorical denial that he has and never had had a Swiss bank account or any assets in that country?

If he is so innocent then he should be actively requesting that the Swiss release a statement to this effect!

Anwar vows to sweep away corruption 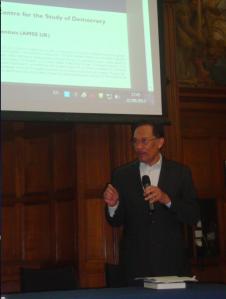 Speaking on democracy – Anwar Ibrahim in London this weekend

Meanwhile, in London this weekend the PKR leader Anwar Ibrahim gave his own verdict on the state of Malaysia’s corrupted leadership during a lecture on Democracy and Islam for the Centre for the Study of Democracy at the University of Westminster.

Upholding tolerance and multi-culturalism in Malaysia he urged all religions to respect each other’s faiths in Malaysia and upheld the fundamental human right of every individual to believe and practice their own religion.

He made clear he deplored attempts to remove the rights of Christians in the region to their long established practice of also referring to God as Allah.

Anwar reminded his listeners that “Islam preaches equality, justice and human dignity” and he went on to say that in the same way as Muslims are angered at insults to the prophet they should also be angered at practices that are so contrary to the teaching of their faith such as “injustice, corruption and political persecution”.

What better reminder to leaders in BN that they should practice what they preach and root out such offences against the precepts of their own great religion as the grand larceny of Taib Mahmud and Musa Aman against the people of their states?

“Don’t be bothered?” is not a suitable response.  For the Full Questions and Answers to Carlo Somarruga see below:

[Full translation of the questions and answers of Carlo Somarruga and the Swiss Federal Counsel:

Submitted by: MP Sommaruga Carlo, Date of submission: 03 May 2012, Submitted in the: National Council

According to a report in the “Sonntagszeitung” of 22 April 2012, the Malaysian politician Musa Aman has received over USD 90 million in kickbacks from the logging of tropical rainforests in Borneo. These proceeds of corruption have reportedly been laundered through UBS accounts in Hong Kong and also deposited in Switzerland. According to the Office of the Attorney General, Switzerland has provided legal assistance.

3. Did the legal assistance in the Aman case extend to other financial services providers than UBS?

4. Is the Federal Council prepared to freeze assets possibly held by Musa Aman in Switzerland?

5. In April 2011, former Federal Councillor Micheline Calmy-Rey forwarded an inquiry from the Bruno Manser Fund on PEP assets held by the Taib family to FINMA. What action did FINMA take? Is the Federal Council prepared to freeze possible Taib assets in Switzerland?

6. Did the Money Laundering Reporting Office (MLRO) act? On what grounds, with whom and with what outcome?

7. What measures is the Federal Council taking to prevent the depositing of PEP assets of criminal origin from Malaysia in Switzerland?

8. How does the Federal Council enforce the due-diligence duties of UBS and other Swiss asset managers when dealing with assets of politically exposed persons (PEPs) from Malaysia?

9. Does the Federal Council have figures on the value of the assets of politically exposed persons from Malaysia in Switzerland? If so, what are the estimates of such assets?

10. How does the Federal Council intend to deal with the question of Malaysian PEPs’ assets in the context of the negotiations envisaged with a view to a free-trade agreement between EFTA and Malaysia?

Re. 1: Switzerland has provided legal assistance in the case of MUSA Bin Aman et al. to the Hong Kong Special Administrative Region (HKSAR) of the People’s Republic of China concerning criminal collusion in bribery and taking bribes.

The requesting authority was the Ministry of Justice of the HKSAR of the People’s Republic of China. The Swiss executing agency was the Office of the Attorney General of Switzerland.

The outcome of the execution of the request for legal assistance was been transmitted to the requesting authority in Hong Kong in spring 2011 on the basis of the legal-assistance request,

Re. 3: The legal assistance in the MUSA Bin Aman et al. case did not affect other financial services providers.

Re. 4: Article 184 (3) of the Federal Constitution empowers the Federal Council [the Swiss government] in extraordinary cases to freeze assets held by politically exposed persons in Switzerland. Such a freeze usually happens with a view to entering into legal-assistance relations with the countries of origin. At the moment, such a situation does not exist in the case of Malaysia.

Re. 5: It is the task of FINMA to examine all indications of possible violations of due-diligence requirements. Because of official secrecy, it is not possible to release information on the outcomes of such examinations in specific cases. As to the possibility of freezing the Taib assets by the Federal Council, reference is made to Answer 4.

Re. 6: As regards data processing, the Money Laundering Reporting Office (MLRO) is subject to official secrecy. Thus, no information can be provided on specific cases.

Re. 7 and 8: Combatting corruption and the return of funds embezzled by politically exposed persons to the countries affected are priority concerns of the Federal Council. Switzerland has comprehensive anti-money-laundering legislation that places for far-reaching due-diligence and reporting duties on financial institutes. Business relations with politically exposed persons are always, according to Art. 12 (3) of the FINMA money-laundering ordinance (GwV-FINMA), business relations with increased risks, which entails additional examination duties as laid down in to Art.14 GwV-FINMA. In the course of the additional examinations, the origin of the deposited assets as well as the backgrounds and plausibility of larger incoming payments must to be explicitly examined. Compliance with formal and material due-diligence duties are tested by review ((audit)) companies and reported to FINMA by way of review reports. Additionally, FINMA has refined and tightened up its direct supervisory reviews of banks in the course of recent years. In this context, the implementation and compliance with heightened due-diligence duties in business relations with increased risks, and particularly in dealing with politically exposed persons, has been reviewed. FIMNA performs intensive monitoring of the implementation of measures introduced to correct weaknesses that have been uncovered. FINMA has extensively described the regulation and monitoring of business relations with politically exposed persons in its reports dated 11 March 2011 and 10 November 2011 (Sorgfaltspflichten der Schweizer Banken im Umgang mit Vermögenswerten von “politisch exponierten Personen” – Untersuchung der FINMA abrufbar unter http://www.finma.ch/d/finma/publikationen/Seiten/berichte.aspx).

Should, despite these precautionary measures, assets of criminal origin be deposited in Switzerland, these will have to be identified and, if possible, returned to the countries of origin. In this way, Switzerland has, in the course of the past 15 years, returned approximately CHF 1.7 billion to the countries of origin, more than any other financial centre of comparable size.

Re. 10: Based on the declaration of cooperation of 20 July 2010, Switzerland and the other EFTA countries (Iceland, Principality of Liechtenstein and Norway) are currently conducting a dialogue with Malaysia. The aim of the declaration of cooperation is to examine the possibilities and means of intensifying the economic partnership between the parties. In this context, the EFTA countries and Malaysia have undertaken initial preliminary measures with a view to preparing negotiations of a free-trade agreement. The questions discussed in this context do not fall within the ambit of Switzerland’s policy in the field of economic crime.]