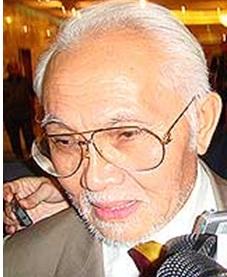 The Chief Minister has denied he has illegal foreign assets.  He previewed the statement, made today in the State Assembly, as a ‘surprise announcement’.

Onlookers would have been surprised if he had announced his resignation, the honourable course of action, given official investigations now underway into his corruption and abuse of power.  However, few will have been surprised by his string of denials!

The actual nature of his ‘categorical’ denials were in fact rather confusing, however.  What exactly was he denying when he said:

“Let me state categorically that I have no secret Swiss bank account, nor assets or investments of any description. None whatsoever”.Taib in the DUN today.

The Chief Minister spent a lot of energy in denial.  For example, he even attempted to cast doubt on the actual letters sent by the Swiss President and the Swiss Financial Regulatory body, FINMA, confirming their investigations.  Nice try, but the letters and the investigations are genuine. 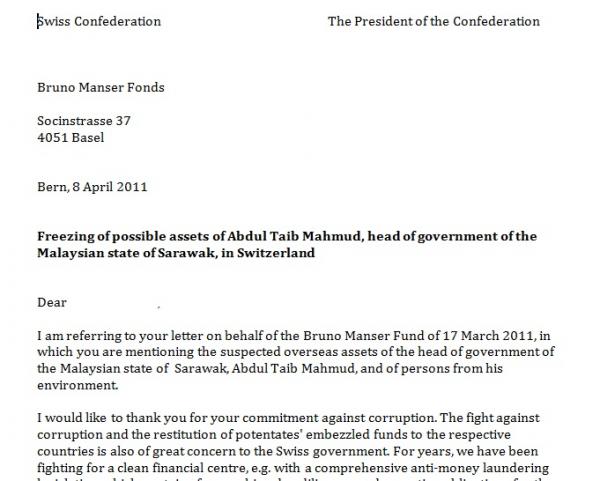 Letter from the Swiss President announcing that the investigation was being launched,

Whether or not the Chief Minister, or his nominees, still have money in Switzerland, as opposed to other tax havens around the world is what this investigation will presumably uncover.  Sarawak Report has certainly demonstrated that the Chief Minister and his family has held assets in the British Virgin Islands (Rodinmass, CMS Bank, Tess Investments) and in Hong Kong and Jersey (SOGO Holdings).  The Chief Minister and his family also have assets in Canada, London and Australia as well.  Why has he not factored these matters into his denials?

A pattern of denials

The Chief Minister has been forced into denials before.  In 2007 he denied (again using the platform of the State Assembly) that he received kickbacks from Japanese shipping companies trying to get licences to take timber out of Sarawak.  The companies had been fined by the Japanese tax authorities for not declaring millions of dollars paid to a company which was registered in the name of Shea Kin Kwok in Hong Kong.  Shea Kin Kwok was the full-time secretary of Taib’s brother and known business fixer at the time, Onn Mahmud.

In fact, for an office employee, Mr Shea held such an enviable portfolio of investments that one can only conclude that either he worked for the Mahmuds for fun, or that he was in fact their nominee.  Mr Shea Kin Kwok has been the registered shareholder of several Hong Kong companies, including Grand Shine (which has shares in Achi Jaya Corporation), Grand Will Ltd, Wittaker Company Ltd, Richfold Investments, Regent Star and Natlite.  He was also until as late as 2005 one of the major shareholders of the massive Sarawak Oil Palm Bhd, run by Taib crony Ling Chiong Ho of the logging company Shin Yang.  Following the timber kickback scandal his name disappeared from the shareholder list and most of the above companies were dissolved. 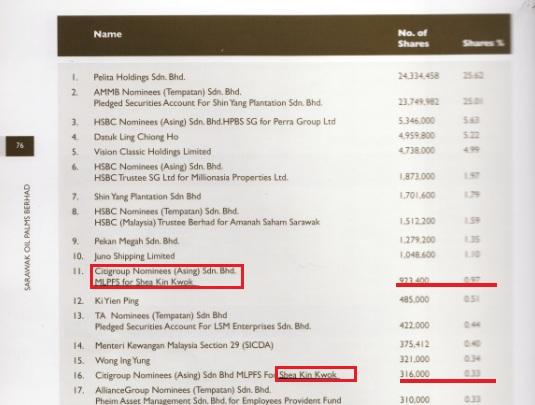 Indeed, if the Chief Minister is so anxious to avoid conclusions that he has benefited from family corruption he should be more careful to avoid conflicts of interest involving his close family members and known business associates.  Taib should certainly have avoided putting his own brother Onn’s company Achi Jaya Corporation in charge of issuing all timber export licences through the agent Achipeligo, which Onn also owns.  It was Achipeligo which referred the Japanese shipping firms to Shea Kin Kwok at Regent Star to make payments in order to get those licences.

In fact Achi Jaya’s stranglehold over the shipping out of Sarawak’s stolen timber for the last 30 years is well known to have become one of the key foundations of the Mahmud family wealth.  It has been calculated by insiders that this business has been worth around RM2 billion a year for the past 30 years.  This trade has now collapsed with the exhaustion of Sarawak’s forests (which Taib likes to pretend are still over 70% untouched and intact), however, Achi Jaya has now diversified into the equally lucrative business of planting oil palm where the Borneo jungle once stood.

What about some further denials?

Now that Taib has entered a more communicative period, Sarawak Report would like to suggest that he embark on some further crucial denials, every bit as relevant as the ones he made today on the subject of Swiss assets.  For example, would he care to deny that he is the beneficiary of the the largest single shareholder of Sarawak’s largest company CMS (made up of former Sarawak State assets and funded largely by Sarawak State contracts handed out by himself)?  This shareholder was, of course, his wife, who has been dead for two years.

Would he also deny that he either bought these shares for his wife, in CMS, to the tune of hundreds of millions of ringgit, or that he acquired them on her behalf for free by corrupt means?  Otherwise, how did his wife, who was not a lady of independent means come by them?  Likewise, how did his young children acquire the remaining bulk of the assets of this enormous company – assets which they still own?

Would Taib further like to deny that he has handed huge tracts of Sarawak State lands to members of his own family for free or at nominal prices in a clear abuse of his control of the State Planning and Resources Ministry? Many of these handouts were then rapidly sold on for millions of ringgit of profit just days or weeks later (see the numerous documented examples of form of corruption in Sarawak Report).

Would Taib also care to deny that he has abused his control over State contracts as Finance Minister to ensure that the most lucrative contracts are nearly always handed to family concerns such as CMS, Naim Cendera, Kumpualan Parabena, Titanium Management and Kumpulan Construction without any attempt to place these contracts out to proper open tender?  Time and again these contracts have then been sub-contracted to more effective construction companies for substantially less – (for example The Bengoh Dam, the DUN Parliament Building, the Kuching Sewer System and plenty of other documented examples of this form of corruption on Sarawak Report).

Carrying on, would Taib like to deny that he has placed his nominees and family members in control of nearly all the key state industries and also private industries controlling Sarawak’s economy?  His cousin and proxy Hamid Sepawi controls numerous positions such as the Chairman of Sesco (Sarawak’s State Electricity) and also Chairman ( and top shareholder) of Sarawak Plantation Bhd, whose assets are predominantly former state lands.

Would Taib like to deny that he works hand in glove with the Sarawak’s key timber barons, handing them licences without an open tender process in return for huge kickbacks?

Would Taib also care to explain how he lives such a lavish lifestyle off the back of his modest Ministerial salary of around RM 20,000 per month?  For example, how out of this salary has he managed to obtain a classic car collection, deck his family in rubies and other flash gems, fund donations worth millions of ringgit to foreign universities such as Adelaide University and indeed to pay lavish sums on trite memorabilia such as the US$2 million he is believed to have spent on purchasing Liberace’s ex-piano?

Others can without doubt add to the list of denials they would like to hear from the Chief Minister of Sarawak.