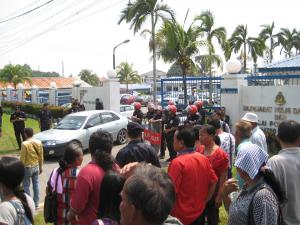 Windows closed shut, air-con on, Lawan ignores his outraged voters as he speeds off from Serian

With his constituents in revolt over the theft of their lands and destruction of their bridge by loggers, State Assemblyman Snowdan Lawan made an obligatory visit to Balai Ringen yesterday.

But, he then hid in the police station and refused to come out and speak to the protestors outside!

“There were at least 200 people waiting to hear what he had to say about this company United Teamtrade, which has been causing all this trouble” said one onlooker, “but he just kept them waiting in the hot sun outside the police station, while he enjoyed coffee in the air-conditioned room inside”.

The source of Lawan’s embarrassment is not hard to detect.  Not only is this yet another inexcusable land grab in an area where people have lived for generations, but the shareholders of this logging company are, as we have exposed none other than two of his senior BN colleagues, Naroden Majais and Awang Tengah!

How come huge areas of Sarawak’s lands and timber concessions have been handed to two Ministers?  This is corruption pure and simple and it is corruption at the expense of the local people whose interests YB Snowdan Lawan is supposed to protect!

And just look what the employees of these two Ministers at United Teamtrade did out of spite to the people over the weekend.  They tore up the bridge into the village in front of the people and the police who did nothing! 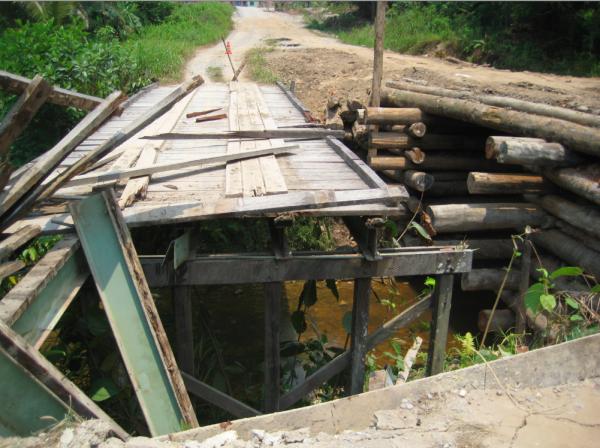 Er – my bulldozer slipped! The ludicrous excuse given by Teamtrade workers to the police after dozens of people had watched them deliberately destroy the bridge at the weekend!

The loggers are apparently now saying that their bulldozer slipped and mistakenly destroyed the bridge! 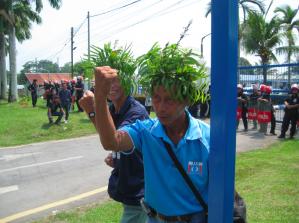 This is in spite of the fact that dozens of people watched the deliberate destruction, including several police officers who failed to take action.

Yet today Snowdan Lawan showed where his sympathies lie.

He invited the Teamtrade staff to his comfortable room in the police station, along with the local Superintendent of the Land & Survey Department and just 5 representatives from the 19 villages affected by this logging.

The rest were ignored in the sweltering sun, although they had spent hours coming early in the morning to see him.

Outside the police station, ranks of police officers stood threateningly in riot gear with plastic shields against the people, who have never shown any violence, even though so much aggression has been shown towards them by gangsters, who have come to their villages and threatened them with swords and parangs if they stand up to the loggers. 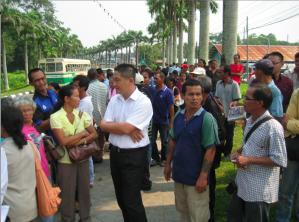 Kept out – the people’s legal representative YB See Chee How is also excluded from the meeting!

Even when the villagers’ legal representative arrived, the opposition assemblyman See Chee How, he too was excluded from the meeting with the wealthy young YB, whose father is also one of Taib Mahmud’s top business cronies.

After a short while inside the 5 villagers walked out in protest.

Soon, the beleaguered Lawan speeded off in his car out of the heavily-guarded police compound at Serian, clearly not wanting or daring to face up and speak to his people.

Once again Sarawak Report is forced to ask how can such a state of affairs have been arrived at in Sarawak?

We ask how is it that the people of Balai Ringen are so notoriously poor, even though billions of ringgit of timber has been harvested from these areas and huge regions of oil palm are being planted? 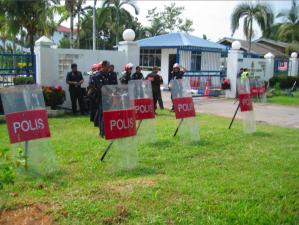 Riot gear! The police were out in force to protect silly Snowdan at Serian Police Station yesterday, but where were they when the loggers destroyed the bridge into Melikin? They just stood and watched.

We ask how is it that this silly young brat-pack, boy-racing YB, Snowdan Lawan, has been put up as the region’s representative in the State Assembly, even though his only interests are fast cars and fast living, thanks to his Dad’s close relationship with Taib Mahmud?

And we ask why is no one taking action against the corruption of the ministers who have taken these illegal timber concessions for themselves and threatened the local people with gangsters unless they accept a ridiculous  RM350 per hectare in return?

Apparently the loggers have their own beefs, which the police are taking very seriously indeed and are going round looking for culprits to blame.

The new logging bridge, for example, has also been pulled apart to prevent the loggers stripping trees out of the area and driving fast through the villages.  This crime has been taken seriously, while the fate of the public bridge built by the state seems of no interest to the police.

At the weekend there was also a reported to be a fire at the log pond which United Teamtrade has created in the rain forest.  However, what right has this company to claim these trees when their provisional licence has not been properly ratified and when the villagers have a case they are bringing to court to contest the removal of their lands? 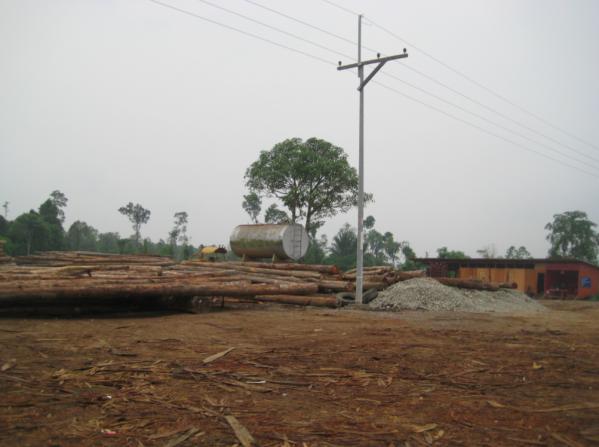 What right to clear this wood?

The fate of the people of Melikin is a test case for the whole nation of Sarawak.  Can they save their lands from Taib’s greedy regime and stand up for the rights of the people or will the land grabs carry on?

Their case comes to court next week.