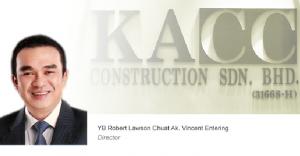 YB Construction King! - Robert Lawson Chuat, the cousin of Dep Chief Minister Jabu, is an absolute wizard at securing massive public contracts, which benefit the major shareholders of KACC Construction including the Jabu family and other key political cronies of Taib

Another mega-corruption project has just been awarded to Sarawak’s ‘Construction YBs’.

Sarawak Report has frequently exposed how a large number of elected YBs have become directors and shareholders of construction companies, which then benefit to the tune of millions of ringgit from public contracts handed to them by their political boss, the Chief Minister, Taib Mahmud.

Unless such mega-projects have been properly tendered in an open way, so that the best value for money is achieved and the project itself found to be of public value, then the process is quite simply corrupt.

Time and again we have shown that Taib does not tender or audit public projects in a proper manner. Instead, he buys political support by handing projects to his followers at the expense of the people.  Now it appears the same applies to Federal contracts handed out in Sarawak. 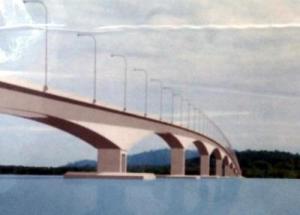 Artist's impression - but after the election who will bother?

What better example of the practice than this week’s story in the Star and the Borneo Post about the latest project to build Sarawak’s longest bridge?

With elections looming, it has suddenly been announced that construction on the long proposed Batang Sadong Bridge at Kampung Buloh, spanning 1,480 metres, will begin next month.

How was this contract awarded?  Well according to the Borneo Post, after a walkabout to curry favour with voters in the area, the PM Najib Razak suddenly announced the project!

“The prime minister came to see for himself during his walkabout and he agreed to build the bridge.”[Borneo Post 19/6/12]

This is not the way that public contracts ought to be handed out!  It is not for a PM to visit somewhere and say he likes an idea and just announce it like some whim on the eve on an election.  He is a Prime Minister not a Divine Ruler!

Projects should go through proper consultation and assessment processes and then be honestly and openly tendered to the best construction company, not just offered to cronies by the PM one afternoon.

But, we can confirm that it has indeed been offered to BN cronies and without open tender.

The Borneo Post article made known that the RM215 million contract has been awarded to none other than KACC Construction Sdn Bhd, which has already been exposed for channelling hundreds of millions of ringgit of public money to its politically connected shareholders through public contracts.

We have earlier shown how the company’s main shareholders are the son of key BN crony Bustari Yusof, whose brother is also a Federal MP and also members of DCM Alfred Jabu’s own family, his cousin Robert Lawson Chuat (himself a YB in the State Assembly) and Jennifer Jabu, Alfred’s daughter.  The other major shareholder of this outfit is the brother of the State Secretary, Mohd Taufik Abdul Ghani.

Bustari, Ghani and Chuat are also three of the four main Directors of KACC Construction. 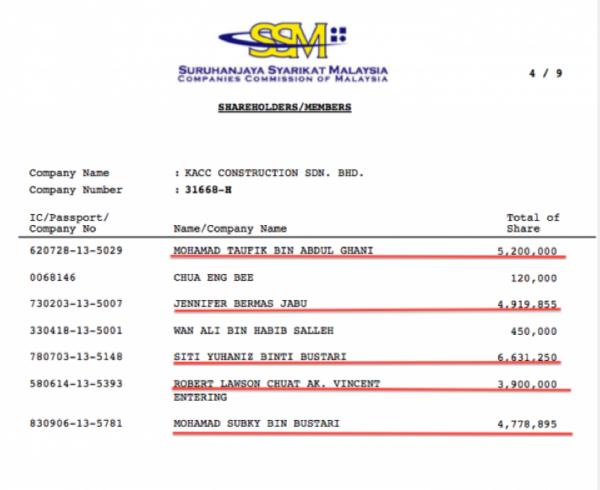 Who benefits at KACC Construction Sdn Bhd? The same old cronies, the Jabus, the Bustaris and Ghanis!

Are any of these characters qualified to build a bridge? 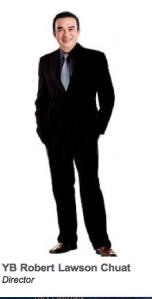 The answer is no.  Robert Lawson Chuat boasts a UK Diploma in Business Studies (roughly equivalent to an A Level), Mohd Abdul Ghani has a degree in Ecology and Mohd Bustari has a degree in Arts and Commerce.

What all these young men have in common is family ties with BN bigwigs.

Sarawak Report has now established that the well-connected Directors of KACC Construction Sdn Bhd are currently looking for a genuine contractor  that can carry out the work!

Our information is that the snappy dressers from KACC Construction Sdn Bhd have made known that they are looking for a sub-contractor will to take on the project for RM184million!

That means they are expecting to receive a fat profit of RM30 million for doing absolutely nothing at all!

There are two explanations for this disgraceful situation.

Either this company is planning to take RM30 million of public money by inflating the budget, in which case we have yet another example of serious corruption involving not only these young men, but their politically powerful relatives, who are clearly behind the decision to hand them the project. 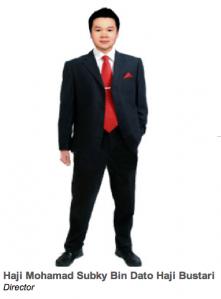 I may not be up to much, but Bustari is my Dad.

Or, even more chillingly, KACC Construction is planning to deprive its sub-contractor of sufficient funds to build the bridge safely and properly.

After all, If RM30 million is to be taken out of the budget for the project where are the savings to be made?  On materials? in construction methods?  In salaries?  In time taken?

Are the people of Sarawak to be forced into paying top dollar for a cut price, corner-cutting project?

This has proved to be the case in Kuching, where the people of the city are now suffering the unpleasant consequences of a third rate sewerage system.

The project was handed to Taib’s own sister Raziah Mahmud, who likewise sub-contracted the whole thing, creaming off a RM78million profit for herself!

Now, according to the complaints received by our website, inhabitants are experiencing numerous problems with cracks and leaks and general poor construction.

To take a similar risk with the construction of Sarawak’s longest bridge defies belief!  Are BN’s political cheats seriously willing to allow graft and greed to undermine a project on which the lives of their people will daily depend?

There is only one way this scandal can be corrected.  If KACC Construction is unable to build the bridge (and who would want them to), they should hand the project at full price to someone who can. 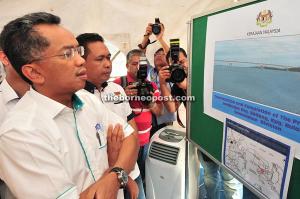 There is of course an alternative consideration. This much talked about bridge may again not reach fruition.

It may well turn out to be yet another of those projects where a tranche of public money gets handed out to well-connected persons and where promises are made just before elections, for the whole matter to suddenly fizzle out the moment the election is over!

A point in case is those roads that were ‘about to be started’ just before the State election just last year.  The moment the election was over the machinery disappeared, along with the money that the local BN YBs had promised their voters had been allocated to the projects.

And readers have just sent a reminder from Sibu, where we recently queried yet another of Najib’s phantom pre-election promises, the so-called University of Technology.  We have shown that plans have progressed no further than a request being made and no money has been put aside.

Yet, it was nevertheless indicated last month that construction would begin at the start of June.

Of course, at that time politicians all believed that the election would be called in June. But, Najib has again lost his nerve and postponed the election.

The projected site for the Sibu Technology University Campus. Not a sign of activity there now the election has been again postponed!

So, no surprise that our Sibu observers have reported that, as we approach the end of June, not a spadeful of soil has been turned on the supposed site for the Sibu University Campus!