Promises Are Even Cheaper Than Bribes - Sibu's 'University' Pledges 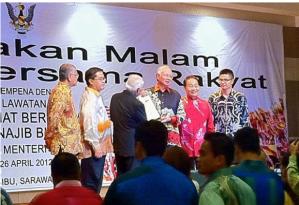 Yet another election, yet another promise that a university will be provided for Sibu - but its a sham

For half a century UMNO/BN and Taib have sucked out billions of ringgit from Sarawak’s natural resources.

In return they have given cheap bribes at election time to the impoverished local people, who have seen none of the benefit of this wealth.

But promises are even cheaper than bribes and BN politicians are therefore even more fond of making these at election time than paying hard cash!

In one perfect example, our readers from Sibu have taken on the role of investigators and exposed some of the false claims that BN have made about supposed progress towards providing the city with a much needed university.

You help me and I will help you

Najib first made the university promise back during the by-election campaign in 2010.  The election bribe could not have been more blatant and in most countries he should surely have been prosecuted for expressing so clearly his willingness to abuse his office in return for votes.

According to the press agency Bernama, this was how the Malaysian PM put it as he fished for votes in May 2010: 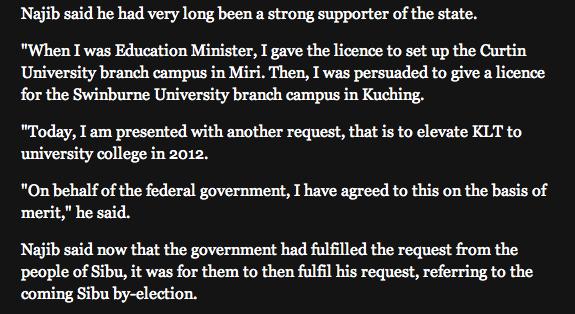 Blatant - We will give you a university, but only if you vote BN at the by-election!

Of course, these and other promises failed to convince the fed up electors of Sibu, who have grown tired of BN corruption and of the 30 year old state kleptocracy run by Taib Mahmud.

DAP won the by-election and maybe that is BN’s corrupted excuse for never carrying out the promise that the Prime Minister had alleged they had already “fulfilled”!

Nevertheless, the SUPP bigwig who has put himself into the driving seat of this project never missed any opportunity to attack people who were skeptical that BN would deliver the project by 2012.  As usual the government controlled newspapers were used for the purpose: 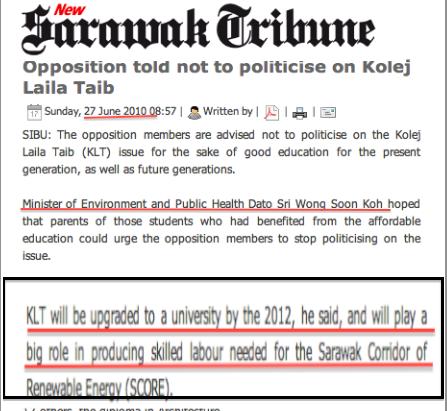 Another election, another attempt at the same old promise

Of course, 2012 has arrived and Kolej Laila Taib is still a college, not a university and there is no sign of that happening any time soon. 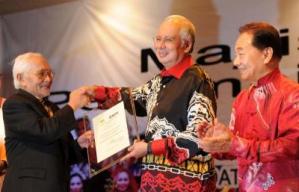 'Letter of invitation' - made out to look like it is permission for a university, but it is no more than a glorified application form offered to a RM2 company!

Yet, as night follows day, another university promise has now been made to Sibu, again a month before another explicated election.

Najib had the brass neck just last month to visit Sibu again and declare a completely new venture, once more with the same bunch of political cheerleaders, Wong Soon Koh and Taib.

This time they were making a big show of an announcement over the presentation of a ‘Letter of Invitation’ for a new university proposal, this time the so-called Kolej Universit Teknologi Sarawak!

BN’s obedient press machine duly fawned over the Prime Minister’s wonderful delivery of more ‘progress and development’ to Sarawak and referred to the billions being spent on infrastructure projects in the rural areas! (as we know, billions may very well have been spent, but little has got past the companies owned by BN’s political cronies who got the contracts!).

The impression was given from this event on April 26th that this ‘Letter of Invitation’ was somehow a certain announcement that this latest venture had the permission and the money to go ahead.  Look at the press release from the University of Kuala Lumpur that has been given a role in masterminding the project to be paid for by Sarawak. 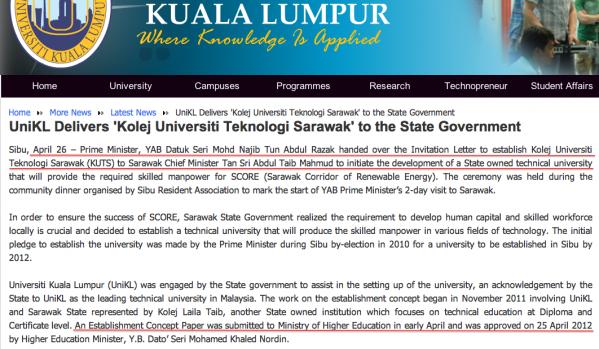 Approved and paid for? Not quite!

Yet, local people who decided to investigate the actual status of this project, have found out that once again this election offer is nothing more than smoke and mirrors.

This is because the grand Letter of Invitation is only the starting point of an application process to set up a university.  It by no means represents any kind of approval or genuine investment.

“So far, the Ministry of Higher Education (MOHE) has only given permission for the application to go ahead”, explains one Sibu sleuth, who has investigated the whole application process and reported the situation to SR.

“The permit to apply for establishment issued by the MOHE is called the “Invitation Letter to establish Kolej Universiti Teknologi Sarawak”. This is the piece of paper that Prime Minister Najib handed over to Chief Minister Taib on 26 April 2012. The confusing and ambiguous name of the permit makes it appear that the establishment of UCTS has already been approved. This confusion is exploited by Barisan Nasional leaders to mislead the people of Sibu into believing that the establishment of UCTS has been approved by Prime Minister Najib. In reality, the application to establish UCTS has only just begun”. 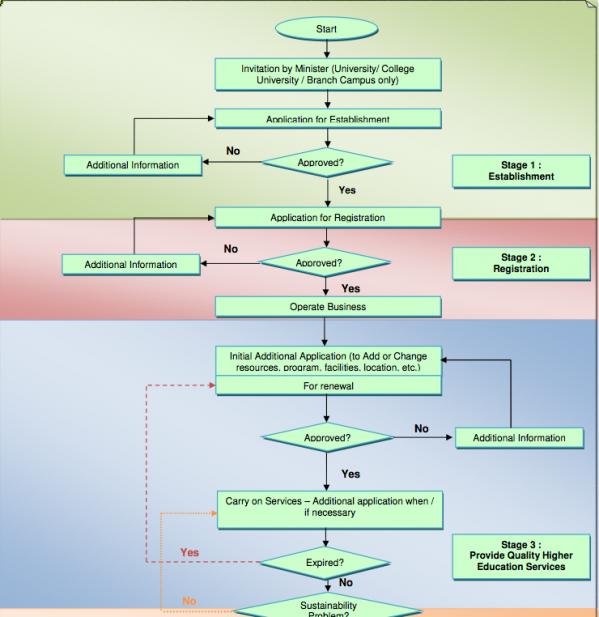 This flow chart from the Ministry of HIgher Education shows just how far there is still to go for the project that was hatched just last November in time to look good for the election campaign!

The Guidebook of the Ministry of Higher Education makes clear just how long and tortuous the whole process is. As the local investigator points out:

“What has been accomplished by Barisan Nasional so far, i.e. getting permission to apply for establishment, is a small part of the Establishment stage. A university college is officially regarded as established only when it has passed the entire Establishment stage and received five further approvals in addition to the Invitation Letter, namely

a. Approval for Establishment of a Private Higher Educational Institution

b. Approval for Appointment of a Private Higher Educational Institution Chief Executive;

d. Approval for Company’s Memorandum and Article; and

It is unwise and financially irresponsible to begin constructing the UCTS campus before the establishment of UCTS has been officially approved by the MOHE.”

There is another issue that is worth noting.  The company that is behind the management of this grand project on behalf of the State of Sarawak, Edusar Resources Sdn Bhd has so far been issued with a mere RM2.00 worth of shares! 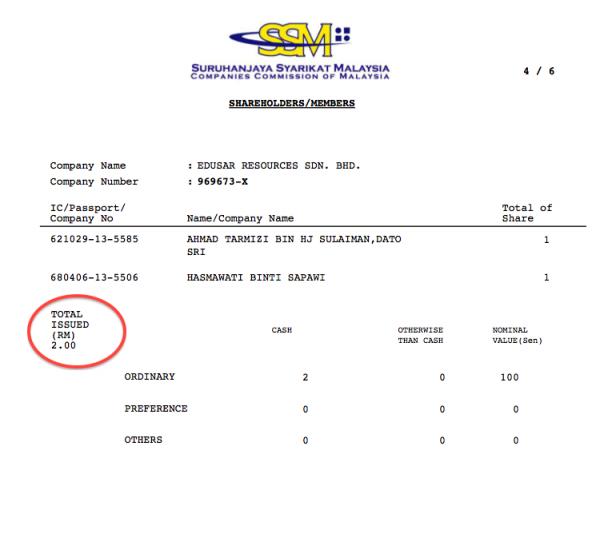 Edusar Resources - owned by the State of Sarawak, but so far only a RM2.00 company! 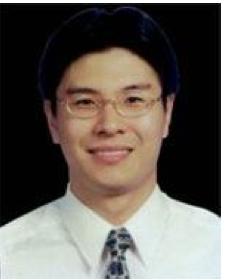 Andrew Wong - Daddy's boy, so presumably he can't be sacked or subordinated. Because he is not qualified then KLT is also disqualified from becoming a University!

The Sibu investigators have now also discovered some of the reasons why no progress could ever be expected on the proposal to turn KLT into a University, a subject which they say is now a matter of “deafening silence” on the part of Najib and Wong.

Firstly, the college (which the Wongs changed from its original name of United College of Sarawak, to suck up to Taib) needs to be headed by an academic in possession of a Phd, to qualify under the rules.

However, Mr Wong has stuck his own son Andrew in charge and Andrew has not achieved this level of academic merit!

Secondly, the college’s finances are a complete mess.  According to the parent company, S.U.C. Consortium’s financial records, it has been losing money hand over fist.

Tufail has, of course, enriched himself to the tune of hundreds of millions by demanding shares in timber companies in return for access to concessions from his brother, the Chief Minister.  So, perhaps a charitable donation is due?

Such losses disqualify Kolej Laila Taib from achieving University status any time soon, point out the Sibu researchers into this matter.  It hardly breeds much confidence in the prospects for the latest venture either, which is being run by the State of Sarawak, again in conjunction with KLT and the same Dato Wong! 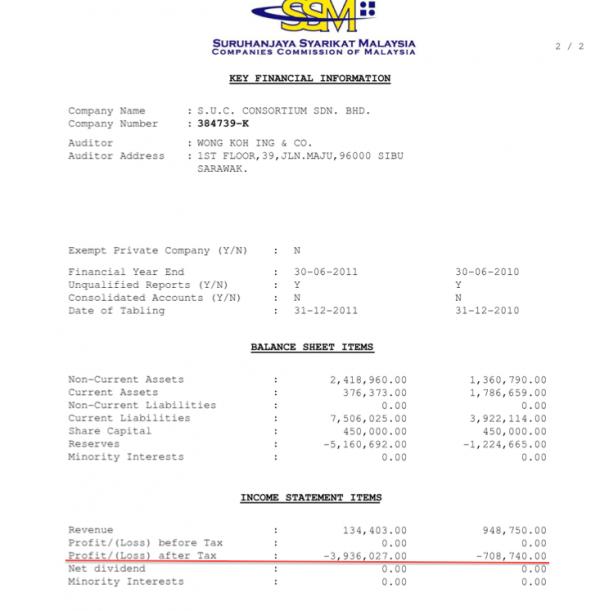 Kolej Laila Taib has been losing money - hazard of having a Taib family member as a Director?