"Why Won't You Let Me Vote?!" - Najib Drowned Out By Protestors At The Dome 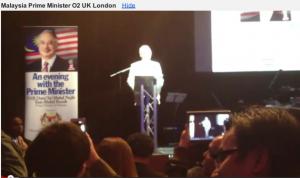 PM in the spotlight as protestors chant "Bersih! Why won't you let me vote?!"

The Malaysian Prime Minister got a flavour of genuine democracy, when he ventured onto the stage in London’s O2 Arena last night and was promptly drowned out by the sound of protest!

This is not something he would ever expect to have to put up with at home, in ‘the world’s most perfect democracy’, where BN’s events are brutally controlled.

Indeed, even in the UK it is not often that an audience is impolite to someone as senior as a Prime Minister.

However, it does sometimes happen when that PM has made himself extremely unpopular. Tony Blair famously received a noisy rebuff from ladies of the Women’s Institute back in 2000 and last night it was Najib’s turn to be overwhelmed by the chant of “Bersih, Bersih”, as he made his speech.

“Can you please stop it?”

According to attendees, the audience of around 500 people was already fairly disgruntled, after arriving at the Dome and discovering themselves in the dark chewing unappetising sandwiches and spring rolls.  The poor quality of the refreshments may have saved money, but were a poor reward for those who had been bussed in from as far away as Edinburgh!

The protest was clearly pre-planned and extremely predictable.  Many believed that the lack of light was an attempt to hide it as much as possible.  If so it didn’t work, as numerous videos have recorded the event. 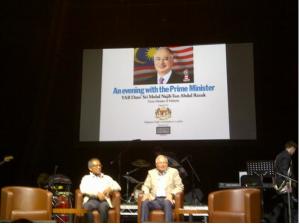 Cosy chat - but instead of staying as promised to "mingle" the PM dashed off early!

The moment the PM stepped onto the podium, under a single dazzling spotlight, the chanting began from a small but extremely loud group!

Others from the audience said they had felt intimidated by the strong presence of Special Branch officers, who had been taking photographs of the people there and recorded the personal details of people arriving.

However, many laughed and took pictures of the braver protestors.

How did Najib ever imagine he was not going to face something like this at a public event in London?  Malaysians abroad are furious at the refusal to prevent all one million of them from being entitled to a postal vote, which is allowed to people in other countries across the world.

At first, the PM tried to carry on, talking on some theme about a train having left the station and him wanting all Malaysians to be on it (despite it having already left).  However, Najib soon wilted and gave up against the din:

“Can you stop it?” he pleaded rather timidly.

“Bersih! We want our vote!” retorted the chanters, getting louder!

“Can you PLEASE stop it” the PM asked, even more desperately, “I can talk to you about this afterwards”, a suggestion that was met with laughter. 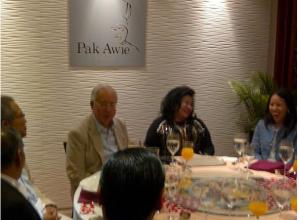 Having left early, the PM was later spotted eating in a restaurant with safer company!

Eventually and after a few more attempts by the floundering PM to take control of the situation, the noisiest protestors were finally strong-armed out of the Dome by security guards.  Najib carried on with relief and boredom descended once more, as he got on with delivering the rest of the speech.

If this was meant as a PR event for the PM it will have done his image little good, either as a strong leader or as a reformer and democrat.

Once again the main message that got out was that it is time for Malaysia to respond to the Bersih movement and clean up its elections.