Najib To Promote Himself At The London Dome - All At The Taxpayer's Expense! EXCLUSIVE 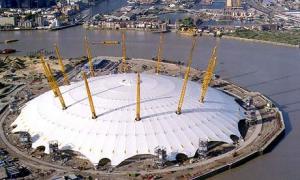 Big enough stage for Najib Razak? Maybe - but not large enough for Bersih 3.0!

The Malaysian Prime Minister, Najib Razak, has hired London’s top venue to stage a self-promoting event, all at the cost of taxpayers, next week!

The O2 Arena, known locally as the Dome, is one of the UK capital’s most eye-catching modern landmarks and it will feature as a key location for the up-coming Olympics.

It is also frequently used to host major pop concerts, such as the fateful Michael Jackson final tour.

However, on Monday Najib Razak has commandeered it for an event starring himself. ‘An Evening With The Prime Minister’!

According to the London High Commission website all Malaysian’s living in the UK are invited to attend what is billed as a free event, with food and and drink provided and cultural entertainment on offer throughout.

Sarawakians, for whom the fund for hard core rural poverty could only afford RM3.47million this year were left aghast.

“Why is Najib spending this sort of money on a foreign PR event”? asked one bemused London student.  “Does he think it plays back home, because hardly any Malaysians living in London are allowed to vote?  The only people who can vote are government workers and they are forced to vote BN anyway!

“This is a party political electioneering event that will have cost millions to stage. It is not correct to spend public money on this sort of PR event and I don’t think people will be impressed that it is being held in Britain either.  Perhaps he just does not dare hold a rally in KL anymore after the turn out for Berish 3.0!” 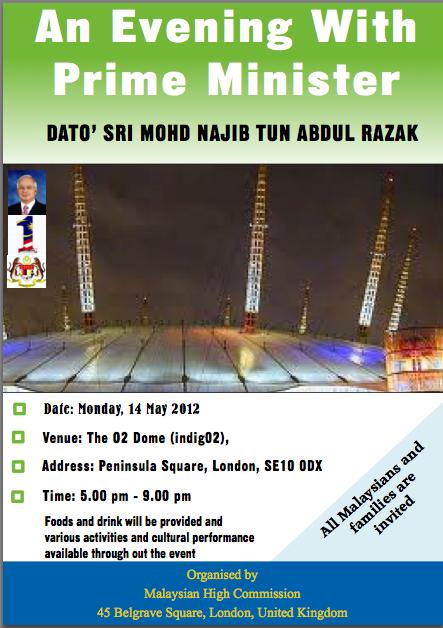 Organised by the Malaysian High Commission - at your expense!

‘Hired audience’ to be bussed in from all over the UK ! 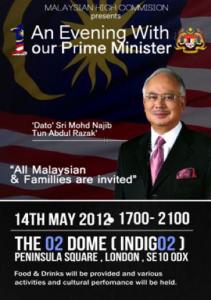 'Unmissable opportunity" - according to the promoters from the High Commission!

Even more scandalous, Sarawak Report can reveal that the High Commission is also arranging for free transport and provisions for students to attend the event from all over the UK!

Students from as far away as Edinburgh University up in Scotland have been urged to attend in a highly organised effort by diplomats.  The roundup is presumably designed to avoid too many empty front row seats that might otherwise be picked up by cameras beaming back pictures to the censored media in Malaysia.

An insider email has been passed to Sarawak Report, revealing the scale of the operation:

“The Coordintor for the entire event is the Malaysian High Commission in London. They are targeting 1000 Malaysians to join in the gathering.

Travel by Coach to London will be provided. Refreshments and a Dinner pack will be served on the Coach. All branches are asked to confirm attendee numbers so that we will know whether to book one of two Coaches. Please pass this message to your local groups(?) and other Malaysians. Get back to me with the total number.

Ideally, let me know by Tuesday 8th May so that i can submit the Budget and total number of attendees to the High Commission.

This is not a formal gathering – the PM will just say a few words and will then mingle with the crowd throughout the evening.

if anyone is interested , please pass me your name, phone number and University. Thanks [email to student organisers] 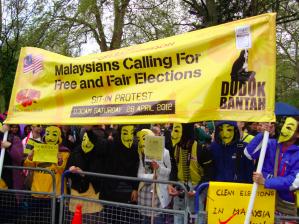 The masked protest in support of Bersih 3.0 gained about 1,000 people in London last week for free! Clearly, the PM is not so confident he can round up that level of support without free food and transport

The irony of the attempt to buy in supporters for the Prime Minister is highlighted by the fact that just two weekends ago the Bersih 3.0 support rally in London achieved at least the same numbers without any incentives save a desire by Malaysians to support democracy and end corruption and the theft of public money.

On this occasion the same students who are now being rounded up by BN were BANNED from attending, on pain of losing their education grants.

As a result many of the demonstrators were forced to wear masks.

It is highly likely that a similar peaceful protest will develop outside the O2 Arena, although the Malaysian Embassy have a record of attempting to hire security guards to prevent legitimate demonstrations, even in London.

Sarawak Report can also reveal that the Prime Minister will again be using public money to promote BN’s party interests by hosting an event for the organisation Friends of Barisan National UK, which he set up in July last year on his last visit to London.

The purpose of the group, according to its website, appears to be primarily to encourage trade links with UK organisations.  A number of British public figures, including Prof Lord Desei, Lord Parry Mitchell, Lord Sheikh of Cornhill and Dr Dawn Gibbons MBE have been co-opted as ‘Patrons’ for the society.

They are listed on the FBN UK website alongside the Malaysian Foreign Minister, Hanifah Aman, whom Sarawak Report has linked to the timber corruption involving his brother, the Chief Minister of Sabah, Musa Aman. 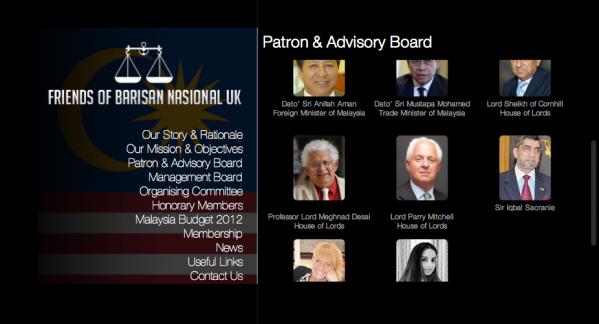 Sarawak Report has now written to each of these UK patrons to ask on what grounds they have agreed to support a political organisation that in the last week alone has been responsible for gassing and bludgeoning peaceful demonstrators asking for free and fair elections; caught out secretly censoring the BBC, Al Jazeerah and CNN as well as being responsible for criminally defaming an Australian senator, who observed the human rights violations by police at the Bersih 3.0 rally (see previous stories).

Our letter, which has been supported by Suaram International, also questions whether it is appropriate for a party political organisation to declare its main object to be to provide “valuable business contacts” and trade opportunities to its members and to set out to be the “leading organisation” for trade between the two countries! Surely the government should be providing a level playing field for trade and not trying to keep it exclusively for BN cronies?:

‘”Through the FBN UK, members have the opportunity to develop valuable business contacts within the British Malaysian community and to exchange ideas and information with a cross section of business, trade and governmental interests. FBN UK shall act as Malaysia’s and UK’s leading organisation helping both Malaysian and British companies grow and develop their business in both Malaysia and UK. 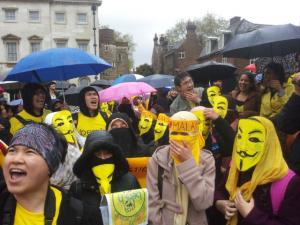 In case the UK patrons were unaware of the case, our letter also alerted them to the recent trade scandal surrounding the Scopene submarine purchase in France and reminded them of the ‘Aid for Arms’ scandal between the Thatcher Government and Najib Razak, when Malaysia’s Minister of Defence.

Najib Razak may have been encouraged by the UK Prime Minister David Cameron’s ‘pat on the back’ for supposedly abolishing the ISA legislation allowing imprisonment without trial.

However, Malaysians in Britain have been active in informing officials here that such window-dressing is by no means the end of repression in Malaysia, let alone political corruption.

The events of Bersih 3.0 have proved their point.

Najib’s people are working hard to keep as much of his schedule under wraps as possible, however they should brace themselves for protests here in London none the less.