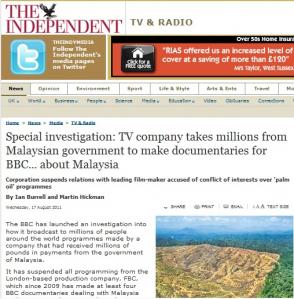 Special Investigation by the Independent

In a personal letter to Taib the Chairman of FBC, Alan Friedman, guaranteed that he could provide promotional coverage on TV news shows, in newspapers and on-line.

It was all illegal, of course, and at the taxpayer’s expense.  But, when did corrupt practices ever bother the current Chief Minister?

In his role as Finance Minister he was happy to find the money!

Now, just a few months later, Abdul Taib Mahmud and his ‘Sultinate’ of Sarawak are getting more public scrutiny that he could ever have dreamt of.  The trouble is that it is not at all the sort of coverage he had been planning on at all!  The dirty FBC Media contract has been exposed for the world to see and the international press are starting to wake up to the gravity of the corruption involved.

Today the UK’s prestige daily, The Independent, has launched a special investigation into FBC and its relationship with Malaysia.  Its three page exclusive can be seen by clicking this link..

Now that this scandal has erupted into the mainstream media in the UK and now that the key authorities at the BBC and the regulator Ofcom are investigating the matter, the full story about how Malaysian and Sarawakian taxpayers’ money has been poured into corrupted TV promotions for BN will come out.

Sarawak Report will be campaigning for full and proper investigations into how the world’s top media organisations were able to be bought by BN and the palm oil business.

We will also be revealing more information about the Taib contract with FBC Media and also FBC Media’s connections with other dubious dictators and businesses around the world.

Taib’s attempt to buy good publicity has turned into a PR disaster.  He should try doing things honestly for once!