The UK’s most respected and established Environmental magazine, The Ecologist, has this week turned its attention to Chief Minister, Abdul Taib Mahmud, with a major investigative article about his record in Sarawak.

In a devastating analysis it outlines Taib’s corruption and his lies about what has happened to the Borneo jungle and its people.  Even more significantly, on the eve of the MoCS Red March, it writes about a discernible change in the mood in Sarawak and speaks of real hope of reform.  This is not least because Taib’s decades of self-interested destruction and plunder have been well and truly exposed.

“Three decades of government land seizures, rampant logging and oil palm expansion has decimated Sarawak’s rainforest and disenfranchised its native population. Yet a seismic political shift is occurring, which represents real hope for Sarawak’s people and its beleaguered forests. Through the work of tireless activists, a reform movement is rapidly gaining ground and exposing the duplicity of the existing government, and its ‘Godfather’, the Chief Minister Abdul Taib Mahmud”. [Ecologist Magazine]

Taib is the man who earlier this year commissioned the discredited FBC Media to come in and do something for his international reputation.  The $5 million dollar contract was supposed to get the Chief Minister and his policies positive publicity across global TV stations, international forums and blogs.

Amongst other things FBC Media launched a new site Sarawak Report(s) and placed articles in New Ledger, an online right-wing site in the US, which focused on undermining the investigations about corruption in our own blog, the real Sarawak Report.  These articles attempted to paint Sarawak Report as being run by ‘wild left-wingers’, instead of professional journalists, purely because of the Editor’s family connection with the former Labour Prime Minister Gordon Brown.

So, it will be doubly disheartening for Taib that not only has his dirty contract with FBC Media been exposed and shown to have entailed a large number of illegal activities on the part of that company, but that his latest critics in the Ecologist are distinctly linked to the Conservative Party instead. 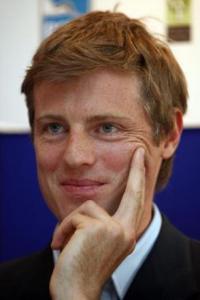 The Ecologist is owned and run by the long-time environmental campaigner Zac Goldsmith.  Zac is an ex-Etonian, Conservative MP and belongs to an extremely wealthy family of businessmen.  So no chance of using wild lefty accusations this time!

The truth is that all independent, onlookers, whatever their political connections, can only be appalled at the greed and theft that has been perpetrated by Taib upon his own land and his own people.

Taib was handed one of the world’s last remaining gems of nature and traditional culture and he couldn’t wait to cash it in – for himself.  He may hang on to power by buying supporters, imprisoning critics and rigging elections, but Taib must now know that reputation is one of the things that cannot be bought.  His will follow him to the grave and beyond as the man who put greed before responsibility, compassion and concern for the people he was entrusted to govern.

The world is waking up to the fact that one of the worst environmental criminals of the past century is living and ruling in Sarawak.  The world is also becoming aware of the growing volume of protest as brave people within Sarawak find the courage to challenge the old dictator over his corruption.

Tomorrow the world will also be watching as some of those protesters seek to exercise their right to freedom of speech and expression and march through Kuching.  As usual the authorities are abusing their power by refusing permission and banning the Red Marchers.   MoCS President Francis Siah, was arrested on arrival at the airport yesterday and told to present himself at the police station today.  He is bravely determined to go ahead and urges everyone in Sarawak to find something red to wear tomorrow.

Taib should be careful what he does to these innocent people, who have such justified cause to protest.  Because now the world is on to him – his reputation goes before him.

Full text of the article in this week’s Ecologist: can be read below 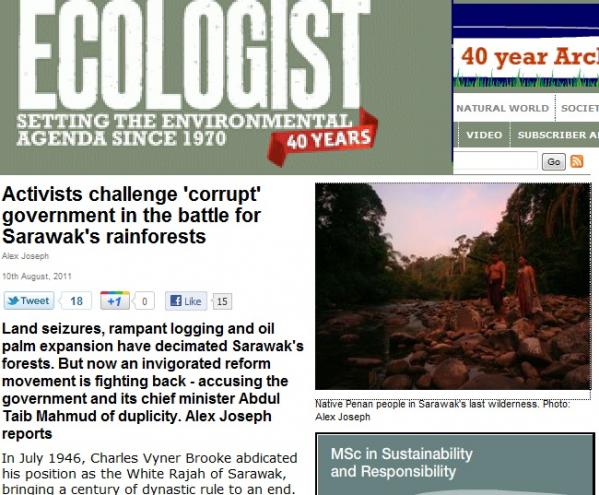 The Ecologist published its investigation into Sarawak August 10th

“Unseating Sarawak’s Last Rajah: A Brighter Future for Borneo’s Indigenous People and Rainforests?
Three decades of government land seizures, rampant logging and oil palm expansion has decimated Sarawak’s rainforest and disenfranchised its native population. Yet a seismic political shift is occurring, which represents real hope for Sarawak’s people and its beleaguered forests. Through the work of tireless activists, a reform movement is rapidly gaining ground and exposing the duplicity of the existing government, and its ‘Godfather’, the Chief Minister Abdul Taib Mahmud.

Following pressure from Swiss NGOs, the Swiss President Micheline Calmy-Rey forwarded the Taib’s suspected deposits in the Swiss back UBS to the national money-laundering authority, a move which can only increase pressure on their counterparts in countries such as UK, Canada, and the USA to follow suit.

All this agitation climaxed in the state elections on 18th April 2011, where despite widespread reports of gerrymandering, vote buying and electoral fraud by the ruling coalition, the opposition gained 15 seats in the state assembly, denying the ruling coalition control over the major cities15. From the public response, it is clear that many see these elections as the high tide mark for Taib’s rule. Sarawakians are now relishing the challenge of political reform ahead of them, illustrated by the 40,000 people who took to the streets in the small capital Kuching in support of reform, one of the biggest rallies in Malaysian history.

With an effective opposition in the legislature, an emboldened civil society, international money laundering investigations and court cases piling up against members of Taib’s network, the existing system could well begin to unravel. The most inevitable factor weighing in against them is Taib’s own mortality. At 75, he is a political veteran who has spent thirty years cultivating his supremacy over Sarawak’s politics and economy, controlling 50% of the Sarawak’s state budget through his additional roles as Minister of Finance and Minister of Planning and Resource Management. This has led to a system that is inefficient and top-heavy, not only in the public sphere but also in the private. Of the conglomerates who dominate Sarawak’s economy, which number less than ten, all have long-standing personal connections to the Chief Minister’s inner circle and rely on his political predominance for lucrative leases and contracts. In a society where political engagement and access to independent news is on the rise, the ruling government finds itself in an impossible situation: increasingly difficult to defend the duplicity of status quo, yet unable to undertake significant reform for fear of losing power.

Malaysia’s federal elections are expected to be called in 2012, and Malaysians are already heaping pressure on the ruling coalition to undertake electoral reform prior to the polls, to ensure that the results are, unlike previous occasions, free and fair. In July 2011, tens of thousands of protestors, including many Sarawakians, flooded Kuala Lumpur demanding these basic reforms, resulting in a brutal crackdown by the police. The opposition are confident that the the public want to begin a new political chapter for the first time since independence, and that electoral malpractice is the final obstacle to overcome.

In Sarawak, opposition parties have clearly articulated the basic structural changes necessary for a more efficient and just economy. Their policies have a strong emphasis on cleaning up land tenure and development practices. For example, in forestry, they have pledged to step up reforestation, reduce the size of logging concessions and encourage downstream timber processing whilst adopting tougher regulations on extraction that would make Sarawak’s timber more valued on the international market; all moves that would strengthen the sustainability of the sector in the long run. Whilst rather than focusing on vast oil palm estates on alienated land, they advocate granting indigenous communities titles and encouraging cultivation in small holdings and more favourable joint ventures. In addition, ensuring open tender processes for land development or public works contracts would raise more public revenue, allowing for greater investment in services, human capital and infrastructure, diversifying the economy away from its reliance on the primary sector”.

Given that most of local opposition leaders have fought tooth and nail against Taib’s rule and have officially represented indigenous communities in their legal battles, there is considerable reason to believe they possess the political will to follow through with these sweeping reforms. Such moves would represent a huge step forward for the empowerment of Sarawak’s indigenous population, and for the conservation of its rainforests.

Yet Taib remains in power, and despite his tenuous grip, will undoubtably continue to use his leverage over Sarawak’s natural resource to this end. In the meantime, the giant logging and oil palm companies spawned under Taib’s rule have already moved to pastures new: Papua New Guinea, Guyana and West Africa. As such, international civil society must learn from the case of Taib in understanding the crucial links between weak governance and destructive social and environmental policy, with the aim of exposing and disrupting such odious ties, wherever they appear.
1Asian Wall Street Journal. February 7th. 1990.
2Mongabay Malaysian Profile – http://rainforests.mongabay.com/20malaysia.htm
3Ross. 2001. 148 – Timber Booms and Institutional Breakdowns in Southeast Asia.
4 FERN/JOANGOHutan.2006.8
5Our Land is Our Livelihood, IDEAL.
6http://blog.securities.com/2011/03/malaysia-timber-export-recovery-2010/
7http://www.sarawakreports.org/2011/03/22/logging-and-the-rain-forests-taib-open-to-%E2%80%9Cindependent-and-international-inspection%E2%80%9D/
8http://news.mongabay.com/2011/0328-sarawak_google_earth.html?homepg
9http://biz.thestar.com.my/news/story.asp?file=/2010/11/30/business/7432538&sec=business
10There have been well documented instances of vote buying and political manipulation by promised infrastructure. Please see Sarawak Report for recent instances and for earlier examples, ‘Our Land is Our Livelihood’. IDEAL. 2001
11Test Case of Nor Anak Nywai vs Borneo Pulp & Paper Sdn Bhd.- http://borneo.live.radicaldesigns.org/article.php?id=665
12List of Taib’s assets http://www.stop-timber-corruption.org/resources/black_list_taib_assets_2011_02_21.pdf
13Malaysia Today. http://malaysia-today.net/mtcolumns/from-around-the-blogs/35174-taibs-former-us-aid-found-dead
14Illicit Financial Flows from Developing Countries: 2000-2009
http://chiengjen.blogspot.com/2011/01/massive-illicit-financial-outflow-from.html
15Ross. 2001. 148