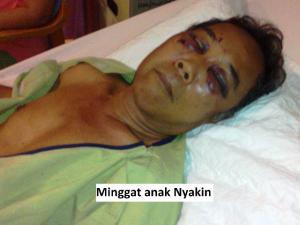 The shocking pictures of Minggat Anak Nyakin and his son Juan Anak Minggat speak volumes about the problems in Sarawak.  The two men were viciously attacked on the night of February 14th by illegal loggers, who have been plundering their lands for years unhindered.  Minggat was left for dead on the steps of the company manager’s office and has yet to regain his power of speech.  It was left to his son to crawl away in the dark, barely alive himself, to get help.

Amazingly these two men are now being held under police guard in hospital, because they have been remanded over the incident.  Meanwhile, the latest news is that no attempt has so far been made to detect or arrest the attackers, although their headquarters in Sungai Rusa is well-known.  It is perhaps of little surprise therefore that despite numerous reports by Minggat and his family about the illegal logging, the police had done nothing over the years to prevent it or investigate the problem.

Native Rights are ignored by the authorities

The unspeakable injustice of how Minggat and his family have been treated by the authorities and the people who are supposed to be keeping the law in Sarawak is unfortunately not the exception but the rule these days.  Minggat’s wife, Jelembai, who says that her husband is likely to never fully recover, told Radio Free Sarawak in an exclusive interview:

“Everyone is so scared of these people, which is why no one normally stands up to them” 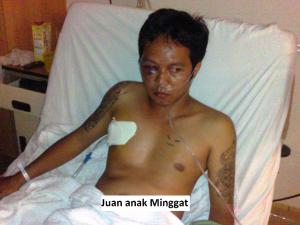 She explained that Minggat had reported the activities of the illegal loggers to the Police, the Lands and Survey Department and the Public Works Department again last December and had complained that their farm areas and roads were also being torn up by the intruders.   However, none of these authorities showed any interest in upholding the law and defending the rights of the Iban community against the criminals plundering their lands.

The pair are believed to have acted in desperation after passing by their parcel of NCR land at Sungai Rotan and Sungai Penyaru Kuba (Kiba) on the evening of 14th February and seeing that the logging was continuing unabated.  They decided to go to the company’s log pound in the hope of at least negotiating some compensation.  It was this that laid them open to the attack.

Of course, if the police had wanted to avoid any disturbances of the peace they should have done their proper job weeks ago and made their own visit to the company log pound and dealt with the theft and trespass.  However, because the police had not come to the assistance of the community they are paid to defend, the two men felt forced to confront the loggers on their own.

The attack that was then carried out shows just how confident the logging companies are that their gang activity will not be stopped or challenged.  These thugs are the brutal enforcers of Taib’s policy of plunder in Sarawak and the police and the authorities know that it is no longer their job to carry out the law, but to turn a blind eye to the law-breaking, thuggery and exploitation that is making life miserable for hundreds of thousands of rural people. 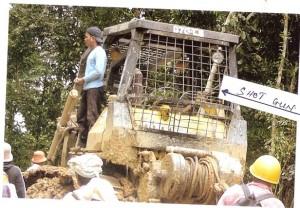 Caught on camera! Thug with a home-made gun threatens villagers in Sri Aman - he told them he would bring gangsters from Sibu to sort them out.

Sarawak Report believes that the use of gang intimidation and violence is a clear instrument of policy by the BN Government, who are backing the logging companies.  These gangs of thugs are notorious and widespread in Sarawak and BN cannot pretend that this incident is isolated or unusual.

Just this weekend another frightening drama of intimidation unfolded outside Rumah Ranggong, where two bus loads of thugs were brought to make camp outside the longhouses who had been blockading the invasion of their lands by an oil palm company.  The terrified locals believe they were hired to intimidate them by Niamas Istimewa Sdn. Bhd., a subsidiary of BLD Resources, who are logging their area.

On this occasion the police were called to the site to find 100 thugs armed with parangs and explosives. Their lame reaction was to arrest only one leading figure and to allow all the others to return home, having handed them back their weapons!

Fighting back at last 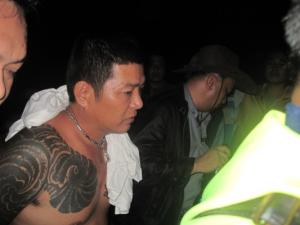 Why were these armed gangsters not instead rounded up and interrogated?  Why have the logging company managers not been remanded in custody and also properly investigated?  It is because for years these are the people who have been brought in to do Taib’s dirty work across Sarawak while the authorities look the other way.

Their job is to terrorise the people and rightful Native Customary Rights land owners so that Taib’s business partners, the crony logging companies, can pluck out all Sarawak’s trees and sell the valuable wood that has made him and his family billionaires so many times over.  However, now that their activities are being photographed and put on video these tactics can no longer be carried out in secret.

The communications network has helped grow the confidence of local people.  Last month one village was warned by mobile phone about a gang of intimidators who were coming to attack them and they were able to call on 500 locals to come and help round up and imprison a group of 20 armed thugs.  Cases like these are now being taken to court with the help of the PKR opposition leader, the native rights lawyer Baru Bian and his fellow human rights lawyers.

is expected to be demanded from the logging companies. 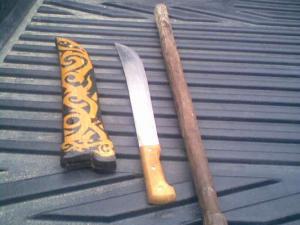 All hundred gang members at Rumah Ranggong were armed - the police handed their weapons back!

Time is running out for Taib Mahmud.  He should look at the examples of the numerous rebellions in the Middle East and realise that after 30 years patience runs out.  He must allow people the freedom to chose who they want in the coming election and not try to squash his rivals by yet again abusing the police and ordering them to close down legitimate opposition rallies.  [see upcoming story on the gagging of opposition leader Baru Bian].

Provocative attacks on free democracy are currently happening all over Sarawak as Taib tries to strong arm yet another election victory.  He should beware of making people angry.