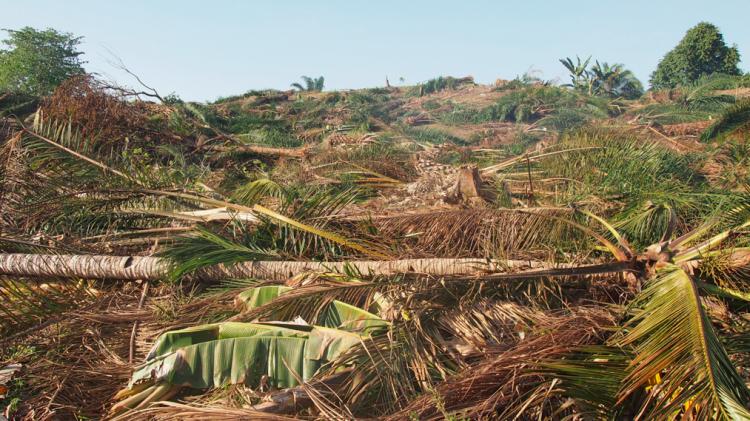 The said land was gazetted as a Native Reserve since 1988. However, in 2004, an immigrant who is a Bugis was appointed by authorities to become the village headman.

Since then, the Sandakan District Chief and the new village headman started to approve and issue permits described as ‘Permit Menduduki Lot Perumahan Bumiputra’ to outsiders who were trespassers, outsiders and/or immigrants.

The court action against the SMC was sought after SMC brought in 3 excavators and cleared over 40% of their cultivated land which comprised of mostly productive oil palm trees on 16 April 2016.

Heavy security was present during the demolishment, comprising of a truck of policemen and Esscom personnel. They stopped and threatened arrest on the villagers coming to the lands to protest the site clearing and destruction of their crops.

The villagers, some of whom are retired government employees and policemen, are dependent on their land for income.

Despite appealing to the Secretary of Natural Resources since 2006 to look into the matter, no decision or action was ever made. In addition to the appeal, the villagers had made more than 20 police reports over the last 10 years in respect to the trespassing events and the destruction of the villagers’ crops and houses but to no avail.

The villages decided to bring the matter to court as the last resort.

“Our years of appeals and complaints to the Government since 2006 were nothing but a total disappointment and a complete waste of time and money. At the end, oppression and victimization have ruined our way of life and made us even poorer with imminent hardship and insecurity in life. We are now forced to go to the court to seek justice,” said Augustine Alang from Kampung Sinar Baru Gum Gum.

Representing the village is lawyer Datuk Kong Hong Ming. Defendants named in this case include the Deputy President and President of the Sandakan Municipal Council (SMC).