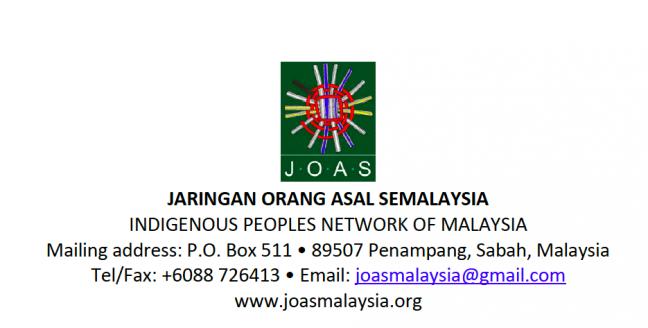 As the World Conference on Indigenous Peoples (WCIP) is going to take place prior to the UN General Assembly at the UN Headquarters on September 22-23, 2014, the Jaringan Orang Asal SeMalaysia (JOAS) appeals to the the Malaysian government to support a strong Outcome Document for the WCIP.

The objectve of the WCIP is to have an acton-oriented outcome for realizaton of the rights of indigenous peoples at the natonal and internatonal levels in line with the implementaton of the UN Declaraton on the Right of Indigenous Peoples (UNDRIP). Indigenous peoples or the Orang Asal represent about 13.8% of the total population of Malaysia. Many Orang Asal contnue to sufer from marginalizaton, systematic discriminaton and loss of lands and resources in the name of development.

Representatves of the Orang Asal of Malaysia, together with other reprentatves, have engaged in the WCIP process and other UN processes in good faith to ensure States commit to fulfil their obligatons to respect and protect indigenous peoples’ rights. The present draf Outcome Document was the result of consultatons from June to August held by the President of the UN General Assembly, and among indigenous peoples, governments and UN agencies. This draft Outcome Document largely contains key recommendatons of indigenous peoples, although certain areas stll need improvements to align it with clear actons for the implementation of the UNDRIP, as well as in the establishment of clear monitoring mechanisms.

As the draft Outcome Document is now being negotated and fnalized by State partes, JOAS appeals to the government to support and strengthen the draf to address and improve the conditons of the Orang Asal to atain equality and equity as part of the larger society. The positve actons of States for a strong Outcome Document of the WCIP will also pave the way in achieving social justce and confict transformaton prevailing in indigenous territories because of the ongoing violaton of their rights. Indigenous peoples deserve no less than the respect and
enjoyment of their rights as equal to others.

This is now the opportunity of Malaysia afer adoptng the UNDRIP in September 2007 to take acton in fulflling their internatonal human rights obligatons. The Orang Asal stand ready to be a partner in the implementaton of a strong Outcome Document of the World Conference on Indigenous Peoples.

The Jaringam Orag Asal SeMalaysia is a natonal organizaton of 83 local community organizatons in Malaysia and has been engaging with the UN system and other bodies for the promoton of the rights of indigenous peoples.

Queries can be sent to: