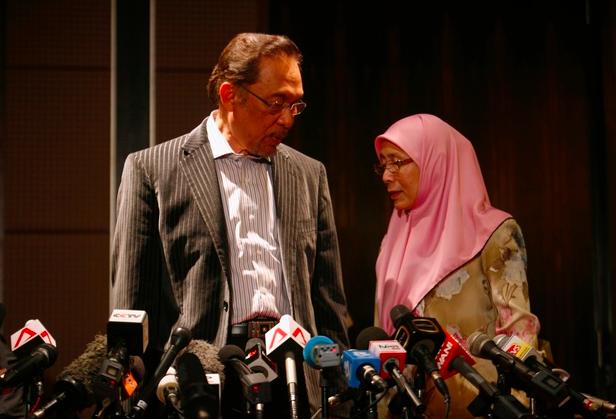 “Malaysian authorities should drop their case against Anwar Ibrahim or risk making a travesty of the country’s criminal justice system,” saidPhil Robertson, deputy Asia director at Human Rights Watch. “This drawn-out political theater has long been exposed as an attempt by the government to take Malaysia’s most senior opposition leader out of political contention.”

Police arrested Anwar on July 16, 2008, based on a complaint from a former aide that Anwar had engaged in consensual sexual relations with him. Serious fair trial concerns arose throughout the original trial, including the prosecutors’ unwillingness to provide defense lawyers with access to evidence against their client. Nevertheless, the High Court acquitted Anwar on January 9, 2012, ruling that DNA samples that were central to the prosecution’s case had not been handled or maintained properly and thus possibly contaminated.

On March 7, 2014, the Court of Appeal overturned the acquittal and sentenced Anwar to five years in prison. The appeal, originally scheduled for April, had been moved up to March, and the verdict and sentencing hearing, most unusually, came after a one-hour recess on the day of the hearing. As a result, Anwar was disqualified from running in the Kajang district state assembly election on March 23.

The prosecution is cross-appealing Anwar’s five-year prison term, which could result in a sentence of up to 20 years. Furthermore, should the Federal Court uphold Anwar’s conviction, he will be stripped of his seat in the federal parliament. Malaysia election law also provides that any person who is imprisoned for as little as one day or fined 2,000 ringgit (US$625) is forbidden from running for office for five years. The 10-year hiatus could effectively end Anwar’s political career.

This is the fourth time Anwar has been charged under the sodomy law, article 377 of the penal code. Article 377 has been invoked only seven times since 1938, according to research by the Women’s Candidacy Initiative. The willingness of the government of Prime Minister Najib Razak to use the law repeatedly against one high-profile political opponent highlights the danger posed by this law as long as it remains on the books.

“Malaysia’s sodomy law seems to exist chiefly to persecute Anwar Ibrahim,” Robertson said. “Prime Minister Najib should seek the law’s immediate revocation before it can be used to harass and imprison others.”

Background on Malaysia’s archaic sodomy law
Article 377 makes it a criminal offense to commit “carnal intercourse against the order of nature.” The law effectively criminalizes same-sex sexuality, and does not distinguish between consensual and non-consensual sex, contrary to international human rights standards. The law should be replaced with a modern, gender-neutral rape law, Human Rights Watch said.

So-called sodomy laws, such as article 377, contravene broadly accepted international legal standards. The United Nations Human Rights Committee, the international expert body that monitors civil and political rights, held in 1994 that sodomy laws violate rights to privacy and non-discrimination. The 2007 Yogyakarta Principles, which apply international law to issues of sexual orientation and gender identity, call on governments to “repeal all laws that criminalize consensual sexual activity among persons of the same sex who are over the age of consent.” In 2011, leading members of the Commonwealth of Nations, to which Malaysia belongs, called for the abolition of sodomy laws.

A November 2011 report by the UN high commissioner for human rights recommended that UN member countries “repeal laws used to criminalize individuals on grounds of homosexuality for engaging in consensual same-sex sexual conduct.” The high commissioner’s report, commissioned under a landmark resolution on “human rights, sexual orientation, and gender identity” that was adopted by the UN Human Rights Council on June 17, 2011, made numerous other recommendations, including several directly relevant to Malaysia. They include: “enact comprehensive antidiscrimination legislation that includes discrimination on grounds of sexual orientation and gender identity”; and “ensure that individuals can exercise their rights to freedom of expression, association, and peaceful assembly in safety without discrimination on grounds of sexual orientation and gender identity.”

“Prosecuting Anwar for something that should never be considered a crime shows how far the government is prepared to go to remove a political opponent,” Robertson said. “By using this law, the government is also putting the rights and freedoms of Malaysia’s lesbian, gay, bisexual, and transgender community at risk.”