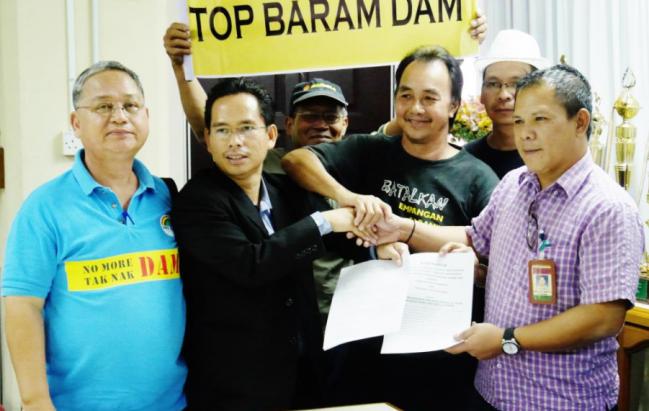 Miri: In solidarity with the blockade which is on-going in Baram, a demonstration and handing over of memorandum to the Miri Division Forestry Department and the Miri Division Police Department was led by the Gerakan Anak Sarawak (GASAK) or Sarawak People Movement in the city today. Meanwhile villagers against the Baram dam reinstated the barricade on the access road to the proposed site for the Baram dam. The villagers then removed the barrier placed by the forestry department which was meant to secure the area for the logging company. They then built their own hut police post at the location to ensure that illegal logging and construction of the access road is stopped.

The peaceful demonstration was in front of the Forestry Department Office at Pelita Tunku in the city centre. Most of the demonstrators were Baram folks who are based in Miri. Supporters from GASAK, the newly formed state-wide human right movement were also mostly from Miri and the surrounding villages. The group was led by the President of GASAK, Mr. Abun Sui, the land right lawyer and member of the Sarawak Indigenous Lawyers Alliance (SILA). Commenting on the action taken Mr. Abun Sui said, “The government must respect the law and human rights. The authority must never use their power to bully and suppress the civilian.”

The memorandum was successfully handed over to the Miri Divisional Forestry Department and the Police Headquarters in Miri by Mr. Abun Sui accompanied by representatives of organisations which are all members of the of GASAK. One villagers, Mr. Anyie Eng, from Na’ah who own some lands at the proposed dam site said, “We request the government to hear the plea of the people. Building the dam will flood our land and rob us of our future.”

At the blockade site in Long Keseh, the villagers are disappointed with the loggers, MM Golden and the forestry officers who gang up to remove the blockade placed by the villagers and each time that happen, the blockaders reinstated it. They called on the government please exercise prudence and justice, respecting the native rights.
Content of the memorandum to the Forestry Department and the Police

In the memorandum the protestors demand that:

(1)    The Director of Forest, Sarawak to revoke the logging permit issued for extraction of timber at the proposed Baram dam site and construction of access road to the same. With imposed that the permit for reentry given to Autorich Sdn. Bhd, for logging must be withdrawn.

(2)    The Forestry Department, the Police GOF and their agents shall remove the barrier that they placed on at the named location in stopping the rightful landowners from access to their NCR land.

(3)    Personnel from the forestry department and the Police GOF must clear the site and leave the immediately.

(4)    The Forestry Department and the Police GOF and their agents must respect the  rights of the indigenous peoples to their Native Customary Right Land. Under the law, a license is subject to the NCR of the people living in the area.

(5)    As of this moment no Environmental Impact Assessment (EIA) studies have been carried out in the said area as required by the law, Requirement for EIA must be respected, implemented and taken seriously including the principles for the Free, Prior and Informed Consent as enshrined in the United Nation Declaration for the Rights of Indigenous Peoples.