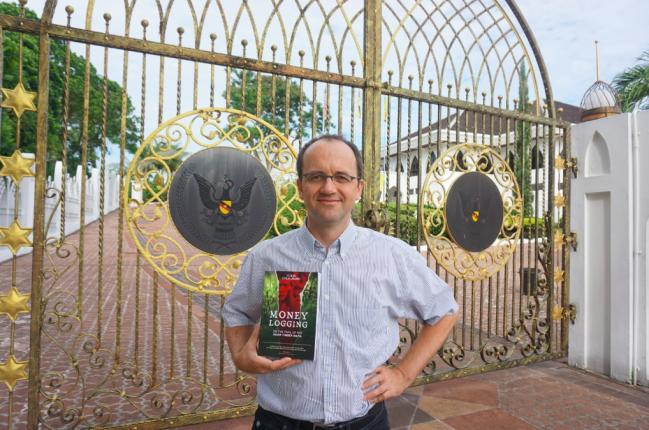 (KUCHING, MALAYSIA). Swiss author and human rights campaigner Lukas Straumann has today met with the press in a surprise visit to Kuching, the capital of Sarawak, a Malaysian state in Borneo. He presented his book “Money Logging: On the Trail of the Asian Timber Mafia” which exposes corruption and challenges the former chief minister and current governor of Sarawak, Abdul Taib Mahmud (“Taib”).

Taib was born as the eldest of ten children of a craftsman near Miri, Sarawak, in 1936. He was a Malaysian minister at the state and federal level almost uninterruptedly from 1963 to 2014. After 33 years in office as chief minister of Sarawak, he was forced to step down last February and has been appointed governor, a mainly ceremonial office.

Taib abused his public office in a spectacular way to enrich himself, his four children and his siblings. In 2010 he said at a public event that he had “more money than I can ever spend during my lifetime.” The Taib family have stakes in over 400 companies in 25 countries. Their known stakes in 14 Malaysian companies alone are worth 1.2 billion US dollars.

Money Logging tells the thrilling story of how a single man grew so powerful that he not only dominated a state the size of England over three decades but also controled its economy. ‘Money Logging is a wake-up call to the international community to treat the Taib family as what they are: politically-linked criminals who have stolen vast assets from the people of Sarawak in a carefully planned effort,’ Lukas Straumann said.

The book was presented in Kuching in a joint launch together with the Australian journalist Paul Malone’s book The Peaceful People: The Penan and their Fight for the Forest. Malone asked Sarawak’s new Chief Minister, Adenan Satem, to grant the Penan rights over their traditional lands. Speeches were also given by Penan representatives Nick Kelesau, Bilong Oyau, and Sarawak state assemblyman See Chee How.

Sarawak, a Malaysian state in Borneo, has long been the world’s largest exporter of tropical timber but log production has fallen significantly in recent years. In June 2011, Malaysia’s Anti Corruption Commission (MACC) opened an investigation against Taib Mahmud which is still ongoing.