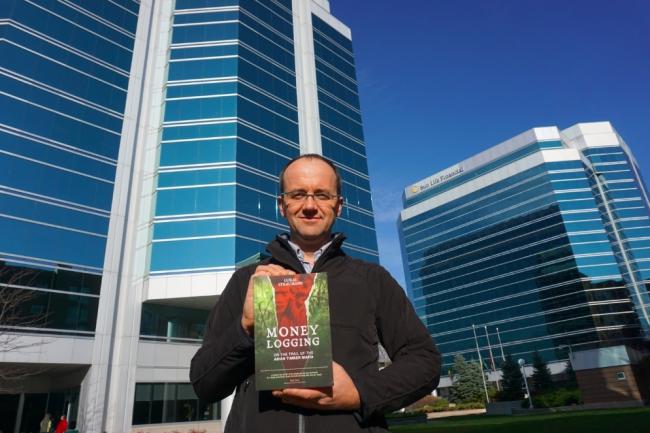 Explosive documents released on the occasion of the Canada book launch of Lukas Straumann’s Money Logging: On the Trail of the Asian Timber Mafia – Royal Canadian Mounted Police criticized for their inaction over Taib family assets in Canada

(OTTAWA, CANADA). A major real estate development in the Canadian capital, Ottawa, has been secretly funded by the family of Sarawak governor Abdul Taib Mahmud („Taib“). This was disclosed today by the Bruno Manser Fund on the occasion of the Ottawa book launch of Lukas Straumann’s Money Logging: On the Trail of the Asian Timber Mafia. The event was attended by approximately 50 people, including members of the press and a former Malaysian High Commissioner to North America.

Documents presented to the Canadian press are proving the close financial ties between the Taib family and Sakto corporation, an Ottawa-based real estate group. Straumann presented evidence on a mortgage loan over CAN$ 20 million granted to Sakto by the Taib family in 1996 for the company’s Preston Street development in Ottawa’s Little Italy. Sakto, which is directed by Taib’s daughter and her Canadian husband, controls three office towers and a residential building at Preston appraised at more than CAN$ 200 million.

Other newly-released documents are showing that Taib’s late wife, Laila, purchased a private property in Ottawa’s Rockcliffe Park for CAN$ 945,000 in 1989. The mansion was later given for free to Taib daughter Jamilah and her husband Sean Murray.

The documents are additional evidence supporting Straumann’s claim that the Taib family has secretly transferred hundreds of millions of dollars in illicit assets from the Malaysian state of Sarawak to family properties in Canada, the US, Australia and the United Kingdom. The Taib family holds stakes in over 400 companies in 25 countries. Their stake in 14 Malaysian companies alone has been calculated at USD 1.2 billion.

Lukas Straumann criticized the Royal Canadian Mounted Police (RCMP) for their inaction on the Taib case: „We alerted FINTRAC and the RCMP back in 2010 on the Taib family’s illicit businesses in Canada. While Malaysia’s Anti Corruption Commission MACC has opened a case against Taib, the RCMP have not committed to anything. Despite repeated letters and e-mails to the officers in charge, the RCMP were not even willing to meet us to discuss the Taib family case.“

The Bruno Manser Fund calls on the RCMP and the Canadian judiciary to live up to Canada’s international obligations under the UN Convention against Corruption (UNCAC) and to freeze the Taibs’ Canadian assets and to prosecute the family for money-laundering.

Under Canada’s Criminal Code, it is forbidden to conceal or convert property that has been obtained anywhere in the world in a manner that „if it had occurred in Canada, would have constituted a designated offence.“