Who Is Holding 1MDB Money Grabbing Lawyers To Account?

Thanks to a slew of recent articles, soon corroborated by the guileless confessions of the “discredited” former Attorney General (as described in a recent British High Court ruling), Malaysians have learnt of jaw-dropping secret negotiations that took place between the UMNO-led government of Malaysia and the international fugitive Jho Low.

The setting? The Attorney General’s Chambers in Kuala Lumpur. The protagonists? The ex- AG, Apandi Ali, himself and Jho Low’s US law team from the firm Kobre & Kim, which is headed up by a British barrister called Robin Rathmell. 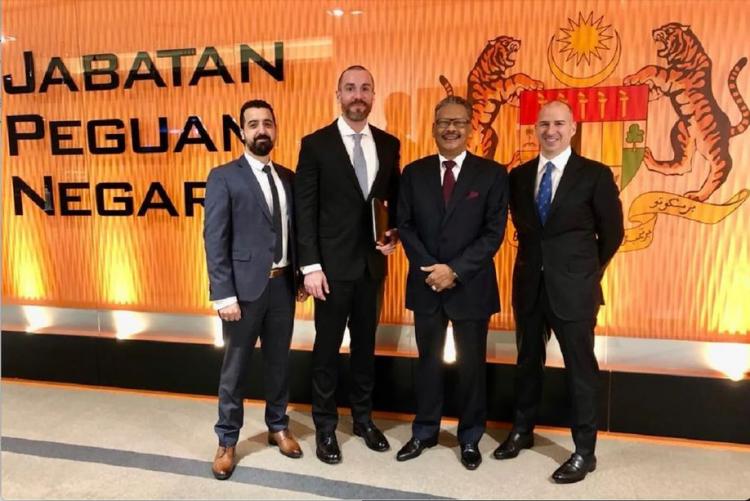 Robin Rathmell (2nd left) poses next to Apandi Ali at the Attorney General’s Chambers in KL in May, accompanied by his team from K&K

The Edge newspaper, which broke the story, has obtained confirmation from the present Attorney General, Idrus Harun, who admits he attended these negotiations held in his own chambers together with senior officials from the MACC.

The US based law firm, which has processed millions of dollars from Jho Low to cover his legal expenses and global PR campaigns, initiated the process by reaching out to ex-AG Apandi, a Najib loyalist, to act as a go-between with the Malaysian authorities who have issued a Red Notice for Jho’s arrest.

It was Apandi who stepped in to the job to ‘clear’ Najib at the height of the 1MDB crisis after the crooked former PM had unconstitutionally fired the previous incumbent Abdul Gani Paital, who had been a hour away from charging him with theft. Who can doubt that the choice of this intermediary came on the recommendation of the now convicted kleptocrat, looking for a reliable go-between for his proxy Jho Low?

Jho Low’s secret offer, sources have told The Edge, was to hand $1.5 billion to the Malaysian ‘authorities’ in return for dropping the charges of theft against him, lifting the INTERPOL Red Notice and letting him travel to ‘settle his affairs’ (i.e. pick up remaining loot).

Did the former AG agree to perform this negotiating role for free? He hasn’t said.

Given Malaysia is presently suing Jho Low and his associates for a rather more substantial sum of $4 billion one also wonders where this ‘bird in the hand’ offer would have eventually ended up? The destinations of previous returns of 1MDB cash to the post-coup governments allied to Najib have been filed as official secrets.

That Jho Low’s lavishly funded legal team was invited to put their proposals in a series of meetings right in the inner sanctum of the present UMNO government’s legal offices, meeting with the present AG himself is testimony to the fact that Najib’s political allies, now back in power, were contemplating letting Jho Low off the hook in return for cash before they bottled it. With such a precedent in place Najib must have been calculating on a similar deal.

Someone plainly intervened. That was a wise political decision, given the likely fury of voters sick and tired of UMNO attempts to allow their mega-criminals to go free.

However, the incident sheds revealing light on the extent of the plotting amongst those in UMNO and their legal cronies to cut deals with their miscreant allies and lay hands on remaining chunks of money left over from the scandal before there can be any danger of them losing office once more.

Sarawak Report has reports of similar efforts directed at Kuwait, involving another Najib loyalist Azalina Ottman, MACC officials and their chosen lawyers to push for the roughly two billion dollars frozen in the accounts of Jho Low’s money laundering partner, Sheikh Sabah, to likewise be returned.

Azalina has contacted the Kuwait authorities, petitions have been drummed up and the Kuwaitis pressured to return the frozen money. But where would it go once returned to the same politicians who sanctioned the theft in the first place? Azalina defended Najib throughout the 1MDB scandal till she was blue in the face whilst the Prime Minister dished out the money round her party.

Sarawak Report can not be blamed for strongly suspecting that the Kuwaiti hoard of stolen Malaysian cash is the very source of the money that Jho Low has been promising to KL in return for dropping charges over the largest single recorded theft of all time.

The incentives for all concerned are clear. A fat sum of $1.5 billion that the Malaysian hierarchy and their lawyers are salivating to see return, somewhere.

This is money that was stolen  from the Malaysian people thanks to UMNO’s conniving support of their former leader and continuing ally Najib Razak – a thief who remains on bail and who intends to buy his way out of just punishment.

For the US law firm, the remaining looted pots of unreturned money are likewise a tantalising source of cash from which they can leech extravagant fees for years and years or, better still, a fat one off ‘success fee’ for negotiating Jho Low’s freedom. It appears they are relying on a dubious extension of the mantra that ‘everyone has a right to a defence’.

However, Sarawak Report fears that the highly paid lawyers from Kobre & Kim could be treading a fine line indeed that deserves a close scrutiny by Washington DC’s Board on Professional Responsibility for the Bar. Robin Rathmell is himself a British lawyer and a member of the British Bar.

One UK lawyer who wishes to remain anonymous has observed:

“I can’t speak to US regulatory and ethical obligations directly but I can see a regulatory issue if any English lawyer tried to act as a go between for a fugitive, trying to offer return of stolen funds to a foreign official as part of a clemency deal. I would be interested to hear how Kobre & Kim characterise Jho’s offer to return money to Malaysia and their role in making the offer”.

As a fundamental principle the UK Solicitors Regulatory Authority further states that “solicitors must act in a way that upholds public trust and confidence in the solicitors’ profession and in legal services provided by authorised persons.”

Jho Low has not merely been served a warrant of arrest by Malaysia, he has been charged with money laundering in the United States. He is equally named in the indictment served against Roger Ng, the Goldman Sachs banker who was found guilty in February.

Jho Low therefore remains at large and wanted by US prosecutors over crimes committed in that jurisdiction. As a local law firm Kobre & Kim are entitled to represent their client in his defence against US prosecutors, but the rules for lawyers who seek to engage fugitive clients clearly indicate the ethical boundaries that govern those representations.

As one article in the New York Law Journal carefully explains:

the ethics opinions provide more generally that an attorney …. “is free to continue to give legal advice to [a fugitive] client and to represent him before the authorities, as long as [the lawyer] does nothing to aid the client to escape trial.”

Given it is plain that the negotiations in Malaysia were designed to assist Jho Low in getting charges dropped in Malaysia and thereby evading arrest and trial in the United States, the actions of Kobre & Kim in contacting the KL authorities with such a plan might appear to breach those principles.

Today the Malaysian opposition lawyer Ramkarpal Singh demanded clarification from Apandi Ali as to whether the negotiations were directed at achieving the dropping of charges against Jho Low for money?

“Any attempt to settle Jho Low’s criminal cases in exchange for a sum of money can be a form of corruption and Apandi must disclose if he was informed by Low’s representatives that this was Low’s intention.
“He (Apandi) ought not to have engaged with Low’s representatives but instead, demand his surrender. Apandi should further disclose if he was paid for his services by Low. If he was paid by Low, the question arises as to whether the said payment was from 1MDB funds,” [The Edge]

In the light of these obvious concerns it is correct to as what precautions Rathmell and his team had taken to ensure that their negotiations with the discredited Mr Apandi, an ally to the convicted former PM who covered up the 1MDB thefts time and again, would not lead to a further crime?

To any informed observer, based on past actions and the characters involved in these negotiations, there are obvious concerns over matters such as hefty commissions and the likelihood of further looting of Malaysia’s stolen money around such proposals. In which case, Kobre & Kim’s undercover negotiations, had they succeeded, would indeed have furthered a criminal scheme or act.

Sarawak Report will be notifying the US authorities to alert them to these concerns, and the British Bar Association of which the British national Rathmell is a member.

Meanwhile, Sarawak Report has written to Robin Rathmell (on Saturday) requesting comment. So far without immediate response. Our questions are below:

Given you have recently posed for pictures at the AGC in KL next to the sacked former Malaysian AG Apandi Ali (described recently as ‘discredited’ by a UK High Court judge) during negotiations which Apandi has said were initiated by yourself in an attempt to get the fugitive from justice, Jho Low, off the INTERPOL Red Notice list and to protect him from charges initiated by the United States, I would be grateful if you would indicate whether you are prepared to give your own interview on this matter to Sarawak Report?
Otherwise we have a series of questions we would like to put to you which you might answer in writing:
1) Are you concerned that you are in apparent grave danger of breaching the ethical code governing practitioners of the law in the United States by apparently seeking to assist a wanted fugitive from justice to evade arrest and prosecution in return for payment from money admitted to have been stolen from Malaysian taxpayers and laundered in the United States?
2) Since you know where Jho Low is hiding and are taking instruction and payment from him have you imparted this information to the relevant authorities in the United States and Malaysia?
3) What efforts have you and your team from Kobre & Kim undertaken to ensure that the planned offer by Jho Low of $1.5bn to be handed to authorities in Malaysia in return for a ‘deal’ to drop charges in that country would be handled legitimately? Your chosen intermediary was a man who inexcusably protected Jho Low’s employer, convicted former prime minister Najib Razak, from justice and who represents a regime known to be mired in corruption. The destination of previous sums returned to the PN/UMNO government from 1MDB thefts has been registered as an Official Secret amidst grave concerns about more massive graft by allies of Najib who stole the money in the first place.
4) Do you accept that your fees are being paid by the products of theft and money-laundering?
I plan to publish an article on this matter on Sunday and in the absence once more of a reply from you I will publish these questions for my readers to consider.
Thank you in anticipation of your speedy response.