To outside observers the decision to push Najib Razak to the front of UMNO’s crucial campaign in the state of Malacca would appear complete madness.

Why employ the most embarrassing emblem in your party’s history to advertise your virtues to an electorate? President Nixon was instantly shunned by fellow Republicans after Watergate, yet his sins pale into insignificance next to Najib’s – perhaps the best known global kleptocrat, found guilty by Malaysia’s own court, and still the subject of daily shocking revelations about his conduct with his present further trial.

What is it that the rest of us are missing?

The answer is that to UMNO’s inner circle Najib still represents the wealthiest power base in a party that is based around wealth. What’s more, each and every senior player in the party was caught up and tainted by their defence of Najib over 1MDB and related graft, which they continued to lie about right up till their defeat at GE14. His ‘rehabilitation’ is therefore their rehabilitation.

Who Cares About The Lies?

The idea that Najib and his political mafia could be so rehabilitated in the absence of considerable punishment and contrition may seem impossible in the face of a God fearing electorate, who have all heard the facts about how the country has been plundered by these rogues dressed up as representatives of the people.

However, there is an art of misrepresentation in the dirty world of politics whereby those who regularly abuse the law to persecute their opponents will complain, when caught, that it is they who are the victims of trumped-up, politically motivated charges.

Najib’s tactic, therefore, has been to state that all his proven misdeeds are nothing more than mud-slinging lies against him. Throughout this affair he has doggedly refused to admit the slightest guilt or regret; accused everyone but himself of the corruption he has been found guilty of and complained of being the victim of made up charges.

To keep up with the growing pile of evidence against him he has changed the details of these denials several times; the one constant being his own unconvincing claim of innocence.

Anyone following this process should see through the charade, observers might assume? However, Najib has adopted a somewhat trendy social media strategy of present times that one suspects may have been expensively drawn up for him by one of those western political consultants he has been so fond of hiring in the past – possibly a cast-off from the failed Trump campaign.

In terms of style, under this playbook you junk honest treatment of the facts and go for theatre. You treat politics as stage show or a team sport, where partisan goals are set above the truth. You demonise the other side and substitute chants for thought. It has been termed as creating a parallel universe for those seeking an excuse to reject reality and licence prejudice.

In Malaysia that parallel universe is generated by Najib’s Facebook platform where he and an army of doubtless well-paid writers churn out falsifications to justify a bizarre claim that he is an honest and maligned man, who has been oppressed by opponents who are the liars.

So, whom has he sought to drag with him down this tunnel of inverted truth? They are none other than the same segment of society that UMNO has always sought to champion to their own advantage. Namely, the uneasy Malay majority who are tempted to oppose  minority groups from multi-racial parties.

Exactly, how many Malays have decided to follow Najib down this wilful path of truth-denial will be clearer after the voting this weekend (cheating, vote buying and the crippling fear of Covid to one side).

However, Najib’s appointment as the ‘Bossku’ of this campaign by the once again ruling UMNO party is as clear an indication as any that UMNO’s new prime minister and the present hierarchy remain solidly within Najib’s league of supporters and are ready to base the future survival of the entire party on Najib’s gambit of blatant misrepresentation. 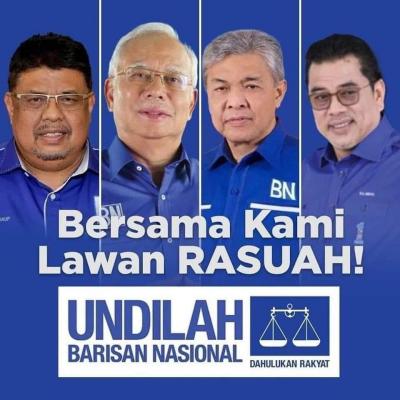 Spoof? The image that has done the rounds certainly summarises Najib’s message

So it has been that as UMNO’s officially designated Malacca Election Manager, Najib has roamed the constituency (frequently in breach of Covid laws and in between the damning hours of evidence in court) pouring out his sanctimonious claims to moral leadership and spurious claims of innocence.

Time and again, here and on the internet, he has had the gall to lecture others over financial mismanagement as the country struggles with the consequences of UMNO corruption, most specifically his own.

Taking up the racist thread PM Ismail Sabri has brought in a budget that UMNO have openly trumpeted for being overwhelmingly dedicated to supporting the so-called Bumiputera majority, leaving almost nothing to the plus 40% minority population who contribute so much to their homeland’s financial base.

No mention, of course, of the reality that UMNO has for decades detoured virtually all such ‘Bumiputera’ funding into the bank accounts of their own mafia network with mere pepper corn tossed to the vast majority of Bumiputera poor who are cited in the propaganda.

A Leader Who Cares About The Poor? How Najib Slipped Up 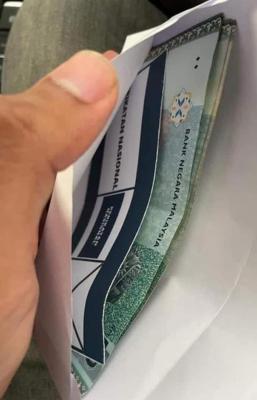 However, thieves will quarrel amongst themselves and the chief suspects behind the most damaging leak to pierce this Najib narrative in recent days and hours must surely be UMNO’s Bersatu rivals, also fighting dirty in Malacca.

As so called allies on the federal scene they were well placed to know about Najib’s latest outrageous petition to secure a vast mansion in central KL from the government as a freebie from a ‘grateful’ nation.

It seems the return of RM117 million worth of unexplained cash and valuables by his obliging allies was not enough to support this fellow – quite apart from all the hidden cash stashed off-shore.

Living his own lie Najib clearly failed to spot the deadly nature of such a revelation when it first slipped out. He has been shaking off outrage after outrage, after all, with spectacular success amongst his hard core following – not a blink till now. 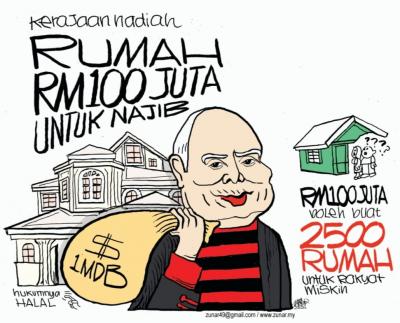 Najib failed to see how others see it

Thus even after the Finance Minister was yesterday forced to admit in Parliament that Najib had placed the request and that it was being secretly considered outside of the current budget.

And even after ministers later leaked that the Cabinet had indeed approved the grotesque handout, Najib doubled down.

As a former prime minister (and convicted multi-million dollar thief and charged multi-billion dollar kleptocrat) he at first maintained he was only asking for what he was entitled to. He was still defending his deed on Facebook in the hours following the uproar this brought in Parliament: “housing is given to all former prime ministers,” he sniffed. All this criticism was just more low political tactics from his opponents!

This at a time of immense hardship, after two years when the poor have suffered from brutal and largely ineffective ‘Covid’ clampdowns by a two-faced government that exempted all their cronies.

So, why was this outrageous self-justification over a hundred million handout so different politically from all the previous outrageous acts of defiance by Najib which appear to have served him well with the more dedicated UMNO supporters?

It seems that, as so often happens, this gambling populist failed to spot that moment when he stepped too far – until too late.

In the heat of the uproar and the crisis of that moment of revelation he had played the same old game and tried to bluff it out. Since this time he could not deny his action he claimed it was nothing wrong. The ‘saintly and maligned martyr of 1MDB’ acknowledged he had indeed demanded an outrageously expensive gift from hard-pressed public funds. What of it?

He woke up too late the following day to the scale of the fury his greed and posturing had provoked on all sides, just in the closing hours of the crucial campaign where he had been playing the maligned moral leader, the man who cares about the Malay poor.

Hence in full sight of the furious public he performed his forced U-turn whilst at the same time trying to pretend he was somehow nobly rejecting an offer someone else had made. He had no alternative but to climbdown, but this was a lie too far after he himself had just hours earlier admitted he had requested the property and argued he was justified in doing so!

In the middle of Covid Najib and his party stand unmasked before Malacca voters.