What's Up With The PetroSaudi Boys?

As Malaysians hardly need reminding the launch scam for 1MDB was the fund’s first deal with a shell company named PetroSaudi owned by the now imprisoned Prince Turki, a son of the former King Abdullah of Saudi Arabia, together with his pal Tarek Obaid.

Prince Turki languishes in jail incommunicado thanks to the internecine rivalries of the Saudi ruling family. However, Tarek Obaid remains at large in Switzerland, despite an Interpol arrest warrant issued by Malaysia back in February 2020 which included his collaborator the British businessman Patrick Mahony on the same warrant. Mahony’s whereabouts have been less clear.

Both are also facing a criminal prosecution in Switzerland for a string of charges not only linked to the money laundering of the tens of millions PetroSaudi received in kickbacks for fronting bogus investments by 1MDB (the money in fact went back into Najib’s accounts and to his proxy Jho Low) but also for their alleged role in the cruel plot to destroy the key whistleblower on their activities, their former colleague Xavier Justo, a Swiss National.

Thanks to their apparent connivance with the Malaysian authorities under ex-Prime Minister Najib Razak, Justo was arrested and imprisoned in Thailand and forced to sign false confessions to undermine the evidence over 1MDB.

In October last year Justo was summoned to give evidence to the Swiss prosecutors in what has nevertheless proven to be a painfully slow case given the glaring evidence available to them. Obaid has poured millions into a barrage of defensive tactics.

According to the summons (below) the charges being examined against the two men include fraud, forgery, bribery of foreign officials, aggravated money laundering: 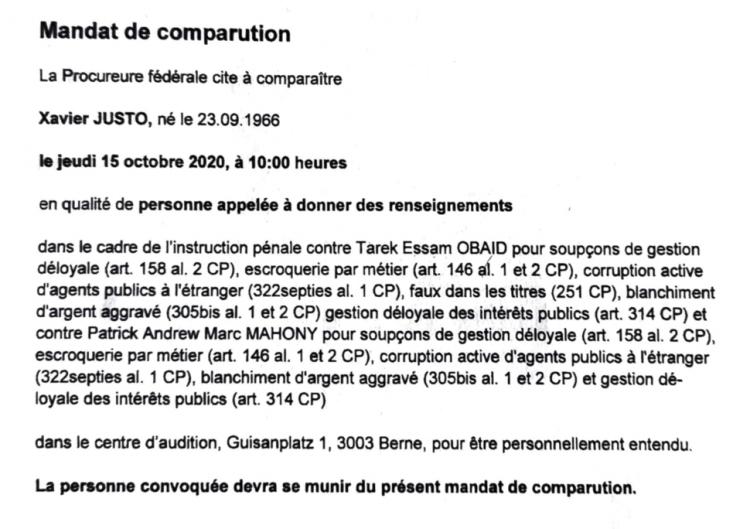 Summons to Xavier Justo to give evidence

Despite these setbacks the PetroSaudi boys have like Najib kept fighting apparently in the hope of conjuring their way out of trouble and eventually making off with the loot.

Tarek Obaid in his continuing capacity now as the sole shareholder of the company is seeking to lay hands on some $340 million in proceeds from PetroSaudi investments in Venezuela that were funded by the company’s misappropriations from 1MDB and which were granted thanks to a successful law suit to their lawyers in London.

However, the funds were then frozen after the US Department of Justice moved in to seize them as part of their action to recover the proceeds of 1MDB money laundering.

Now it would seem Malaysia is also directly after that cash, as just last week what remains of the grand-gesture 1MDB civil actions launched by lawyers linked to the now toppled PM Mahiaddin’s re-focused to a large extent on this PetroSaudi cache. (They originally sued dozens of companies and individuals in actions which have now been mostly dropped as SR originally predicted).

Thus, although the ever-opportunistic duo are clearly hoping to walk off with the multi-million dollar fortune now stuck in London, their position would seem increasingly precarious and under threat from several sides, not just in terms of keeping the money but their freedom also.

Mahony Reported To Be In The US

At which juncture it has apparently emerged that, according to Malaysian official sources, Patrick Mahony who has kept a super-low profile since retiring as a director in the group in 2018, is now in the United States.

Has this key witness finally opted to do the sensible thing and turn himself in to the public prosecutors? It would surely seem so, since Mahony is no fool to imagine that as a wanted criminal as part of a top global conspiracy he could travel to the United States and escape the net of the FBI.

Should he ever have imagined so then the experience of his collaborator and former colleague from Goldman Sachs, Tim Leissner, would have taught him otherwise. Leissner was caught by US border control after an unwise trip to the country back in 2018 and later became a key witness against the bank after pleading guilty to his own role in the 1MDB series of heists on behalf of Najib.

Unless Mahony relished the prospect of spending the rest of his life as a global fugitive in the hope of creaming off a chunk of the frozen Venezuelan hoard his alternative was to indeed attempt to cut a deal, just like Najib’s other key British ally Paul Stadlen did in July, after returning RM7 million to Malaysia in exchange for charges and an extradition order being dropped against him.

If so, at some point Mahony’s witness testimony will come out and it may just wipe some of the smug smile from Najib’s face after things had started to go very much in the right direction for the disgraced former prime minister back in Malaysia.

Among the many matters into which Mahony will be able to give direct insight and provide evidence, for example, will be the role and involvement of Najib with respect to the hit job against Xavier Justo in Thailand.  After all, Mahony was recorded confiding to Justo’s wife that his former colleague’s arrest and imprisonment on manufactured charges in Thailand was at the behest of the then Malaysian PM and that Justo would have to cooperate if he ever wanted to get out jail in Bangkok:

PetroSaudi Director, Patrick Mahony: “I told you who is controlling this…It is his ultimate nightmare that Xavier could turn on him if he gets out. This is his position at the moment.
Laura Justo:  “So what do I say to Xavier about getting out – you told me December?
Mahony: “This guy is still stressed it’s his political career on the line, he’s in deep shit and that’s all he thinks about”.
L: so what do I say?
P:The only way I can show him you are on his side, a team player, is if you are ready to put yourself in the media – you must denounce all the people that are making conspiracies against him.. we are all in deep shit. I told you the other day. I am in deep shit and a Prime Minister of a country is in deep shit because of this … he [Xavier Justo] didn’t have to do that”
[translated telephone conversation between Laura Justo and PetroSaudi Director Patrick Mahony 2nd November 2015]

Theft and money laundering is one thing, false imprisonment, threats and blackmail are another. If he has agreed to a plea in return for his testimony Mr Mahony will not be allowed to hold back on any detail relating to the case from his questioners from the FBI.

Further details should include all that he knows about Najib and Rosmah’s own direct involvement in the secret genesis of the 1MDB plot with Tarek Obaid, Prince Turki and Jho Low that was hatched well away from board members and officials on a luxury holiday yacht just a few weeks after Najib took office.

The plan having been set up the first thing Tarek then did was to call his financier friend Patrick Mahony to fix matters together with Jho Low on behalf of PetroSaudi. There was not a single detail from then on that Mahony was not on top of, soon taking over as a key director of the company and receiving millions of dollars for his pains.

The impact on Najib could be severe. Just last month the fruits of the bloodless coup against Malaysia’s elected government of 2018 by Najib’s friends and allies from the PN/UMNO coalition had started to pay off for the former prime minister.

The courts have convicted him on the first cases of criminal theft brought against him over 1MDB, yet staggeringly on August 5th prosecutors declined to appeal a bizarre judgment to return RM117 million in confiscated cash that he had hidden after losing the election.

A judge had decided to accept the excuse that the money was being held in his private home by the prime minister on behalf of his party UMNO, yet he apparently didn’t find it relevant to question how such vast ‘donations’ could have been legally made to a political party and whether Najib could prove the provenance of the cash.

The return of an UMNO leader to the coup coalition of losing parties now calling the shots has continued to work in Najib’s favour in Malaysia. After all, his last minute agreement to back the newly appointed Ismail Sabri is crucial to the claim of the PN 2.0 coalition that it commands a majority of MPs.

Thus, despite being convicted as a mega-thief, Najib remains a feted member of the hopelessly corrupted UMNO party and a voting MP in parliament (on the increasingly rare occasions when the coup coalition allows parliament to sit and, even more rarely, to vote).

During the days of frantic power-play in August it is notable that Ismail Sabri, spent several hours in late night discussions at Najib’s house during which terms were clearly agreed that would guarantee the convicted Najib’s support.

The full extent of those terms will continue to be revealed in various concessions and benefits which have so far included the latest deal to hit the headlines regarding the once RM37 million in taxes owed by Najib’s mysteriously wealthy son Nizar.

At the end of last week Najib triumphantly declared that the tax bill has now been reduced to a few petty millions and that the family will in due course be happy to reveal how little in the end Nizar has had to pay.

The golden prize for the ex-PM will of course be the dropping of charges altogether on the gross case of corruption currently proceeding against him in the courts (hard to do) and  a favourable appeal on the rock solid existing conviction (even harder). However, for those in charge under UMNO and now PN Najib is plainly relying on the slogan ‘Boleh’ for the powerful.

Nonetheless, with Patrick Mahony possibly now talking over in the United States on the other hand, Najib’s ultimate ambition to return as a ‘vindicated’ PM after the next election is going to look that much more fanciful to achieve. The original PetroSaudi adventure may yet prove his weakest link.