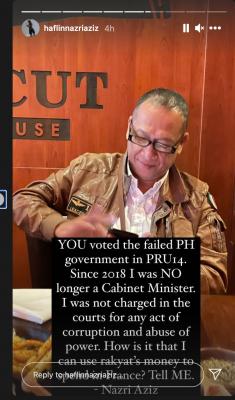 No one has prosecuted Nazri for corruption, his wife points out. So who is to question his French assets?

In doing so he ticked off his ‘western’ journalist questioner for sharing what he pejoratively dismissed as a “Malay mentality”, after they asked if his wife’s self-opinionated arrogance (she has ticked off the King and the PM and opposes Covid vaccinations) and sexy posing online was appropriate for the spouse of a political representative, living off a public salary and perks?

“What’s wrong? I thought you Europeans, you western people are free to say what you want to say. I mean this is freedom of speech, she’s nothing, she’s not a minister, she’s not an MP, she is just an ordinary person who expresses a feeling so what’s wrong with that?

Sarawak Report wondered if there was perhaps an issue with double standards, given Nazri represents a government that has used emergency powers to introduce “Fake News” laws that have seen several critics of the government hauled in for interrogation by police?

Generally, even in ‘western’ democracies the spouses of elected representatives are expected to respect the standards of the electors who pay the household bills.

There is another problem, which is that several of the recent postings made by Nazri’s wife purport to represent quotes from the MP himself. In one posting Nazri is featured seated  elegantly in France whilst ticking off those who seem to think he may have lost support from his constituents. 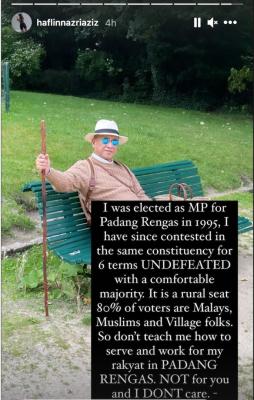 His wife quotes him saying “I was elected as MP for Padang Regas in 1995. I have since contested in the same constituency for 6 terms UNDEFEATED with a comfortable majority.

It is a rural seat 80% of the voters are Malays, Muslims and Village folks. So don’t teach me how to serve and work for my rakyat in Padang Rengas. NOT for you and I DON’T care.”

The implication appears to be that ‘simple’ “Malay, Muslim Village folks” somehow lack the sophistication to reject the double standards of Nazri (and his scantily-clothed, global-metropolitan, influencer wife) and will vote for the ‘boss’ dutifully, whether the couple ditched them in the pandemic (in favour of Paris) or not.

Nazri confirmed to Sarawak Report that his wife was accurately quoting him in such posts and that the MP (whose vote plummeted by 13% at the last election) doesn’t mind her posting these remarks, since he lacks his own online presence.

“I don’t have a social media so I told her to put my picture because people will say I am still a minister, which I am not, and they say I am on holiday. I am not. I am sending my son, he was born in France and you know we had a teacher’s parents meeting so had to go to”

One might query the assumption that attending a parents’ meetings abroad (and taking a week out of work to do so) qualifies as ‘holiday time’.

However, Nazri having raised the matter presented an opportunity to ask this paid representative of the people of Padang Rengas why he is choosing to send his five year old to school in France, as opposed to the local school provided to community he is supposed to represent in a government he supports?

Nazri provided some quite startling justifications. Apparently, the reason is that it will above all save him money (the cost of keeping up an establishment in France and flying there first class to one side).

He is also of the opinion that his son is French, which is either not true (he vacillated on this point) or opens up some pertinent questions about the current nationality of his Malaysian born wife and what residential status she and indeed himself as a Malaysian MP may have acquired whilst still acting for his constituents in Malaysia?

“This boy is French, I mean he was born in France. You know what its like when you are born in France the policy of the government is that they will look for all this French nationality to make sure that they go to school and you know that in France education is FREE! From kindergarten up to university level. So of course I want to take the opportunity to have a free education for him”

Malaysians in Nazri’s constituency might feel the same way. And, although unaccountably they appear not to have the same opportunity to attend a free school in Paris, there is free education in Malaysia…. the one provided for by the government he was elected to run.

However, for some reason it does not occur to this minister that his own child should even consider the same Malay state education that he advocates for his fellow citizens (at their expense). Instead he boasts:

” I am not having to think of him going to an ‘Inter’ [International School] or anything like that. It is free over there. Why can’t I take advantage of that?

It is possible that several French taxpayers might have a view on why an apparently wealthy foreign politician ought not to be allowed to “take advantage” – indeed there is a major ongoing debate in France about this very issue of foreign freeloaders.

“He was born there and they look for you because it is mandatory to go to school in France. Of course I take advantage of it.  And I don’t find anything wrong if I want to have you know my son to speak French and for him to study and maybe live in France – there is so many other people who are doing it. So what?  What is wrong?

Of course, many might think there is rather a lot wrong, because Nazri and his son ought to be living amongst those Malaysians who pay him to be an MP.

However, the globe-trotting parliamentarian, who was a minister until well after his son’s birth in 2018, provided some interesting new information. He disclosed that he apparently lives in the vicinity of the school in Paris instead:

It is mandatory [for his son to go to school] because I live in the vicinity of the school, so we went to the school because you know we want to put him in kindergarten and he was given!
– Do you have a home in France? [we asked]
Yeah.. its not a home, any other people also they have houses, apartments in London so what’s wrong with that? I don’t understand.
– Is it a permanent address in France?
For sure, for sure you have to live there. You know my wife live there last six years because her son was born there. So what is wrong I don’t understand.”

Nazri went on to explain that he lives separately from his wife (although her Facebook posts have overwhelmingly indicated she lives in Malaysia in extreme luxury and glamour). Fortunately, he explained, his job has enabled him to visit her frequently.  Given UMNO politicians manage to be wealthy on their salaries and rarely attend parliament this may be true.

Perhaps the simple folk of Padang Rengas are too ‘village-like’ to mind?

I am no longer a minister, so I can travel (but the last one year I was here in KL because of Covid) but even so I went to France for her son and of course she has to be there because her son is going to school. So what’s wrong with that?
– Did you apply for French citizenship so he can have a French education? [SR]
No, no no no, no need for that, because when he is 18 it’s up to him. So in case he chooses French citizenship certainly the French government will want to give him French education!
– So would the Malaysian Government not want to give free education?
It’s my choice, what’s wrong with that? I want him to be studying in France because I feel the education is GOOD and MOST IMPORTANT OF ALL IT’S FREE.

Again, Nazri appears to think (wrongly) that French citizenship will be automatic for his son, should he choose it.

“When he is 18 whether he wants to be French or Malaysian it is up to him and I want him to learn French.
– Why?
“What’s wrong? I don’t understand. You have the mentality of Malays. I don’t understand that. You are a Western person. What is so wrong if I want to have something for my son? Most of all it is free education, what is wrong with that? ….

Startlingly, he then made the obvious point that it is mandatory also in Malaysia to go to school. But, Nazri then conceded that his son’s permanent address is now in France, answering:

Yes for sure, because I want him to live there.

In this case, ought not Nazri Aziz be thinking of putting himself forward as a representative for some constituency in France rather than for the simple “Malay mentality” people in his own constituency who previously voted for him?