'Ted Cruz Of Malaysia' Issues Threats But No Apologies

Last month Senator Ted Cruz from Texas flew out to Mexico just as his home state was deluged by a rare snow storm and the electricity failed in zero temperatures. He had decided a warm weekend in a top hotel was the best solution (and left behind the dog).

All these actions naturally unleashed outrage amongst his constituents and hit the headlines all over the US. By the time he was photographed leaving from the airport the senator realised how bad his idea had been and next day he was back on the 6am plane. Too late.

At first, Ted Cruz tried to tell the media that he was just being a ‘Good Dad’ taking his kids for a much needed break. He was immediately admonished for laying blame on his children for his selfish act and within hours had said the ‘S’ word (sorry) and admitted to his misjudgement.

Soon he was taking care to be photographed personally visiting his distressed constituents and handing them badly needed drinking water and provisions in the snow. He did not sue the media who had put him in the spotlight for doing what he did (of course he didn’t).

Malaysians might see the parallels with their own absent MP Edmund Santhara, exposed by Sarawak Report for having dodged out of Malaysia to New Zealand before Christmas not just for a long weekend mind you, but so far for over two whole months.

In the same way Cruz headed away from the snowstorms Santhara stayed away over an entire period of catastrophic floods. Unlike Cruz he is threatening to sue the media for exposing him on this point.

However, Santhara was not just taking away his family for a jaunt even. The MP and Deputy Federal Territories Minister has in fact moved them lock stock and barrel out of his constituency and out of the country he aspires to manage altogether!

It appears the Santharas prefer the schools and lifestyle down under in New Zealand, but meanwhile Daddy would still like to call the shots back in Malaysia and draw a salary from the Malaysian public purse … hmmmm.

So, just like Ted Cruz, Santhara’s first response was to use his children as his excuse for following them abroad and then staying put. Having sent his family to live elsewhere he then realised they need looking after so he followed them. Simple, but even Ted Cruz probably wouldn’t have tried it quite that far.

And we are not just talking about a long weekend, of course. Thanks to Santhara’s own statements it now emerges he has been away for a ‘an agreed period’ of 55 working days, which conveniently covers the time he has been absent in New Zealand since Christmas until his exposure last weekend.

Santhara claims he gained advance approval for this exact period of absence under the ‘Caring Government’ provisions brought in by ‘PM8′.  You might have erroneously assumed that Caring Government was directed at the people rather than MPs, but the people have of course experienced nothing but suffering over the past year of lockdown, so good to know at least MPs are cared for.

The minister has also (as SR predicted yesterday he would) claimed he negotiated a salary deduction for this period away – and he has published a photograph of a stamped piece of paper that he says ‘proves’ his advance negotiation of this Caring Leave Provision. 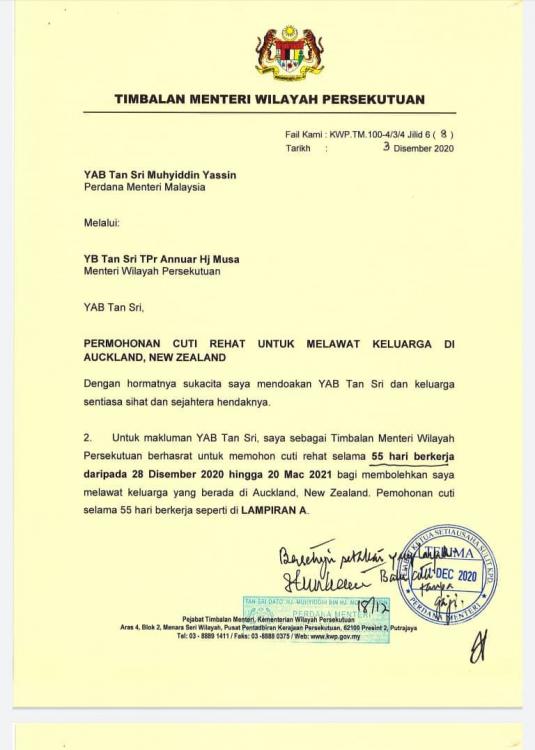 In which case Sarawak Report is bound to question why this arrangement was not accompanied by an official announcement at the time to the effect that the minister would be taking compassionate leave and there would be a deduction from his salary?

He is a public person, engaged and paid for by the public so didn’t the public have a right to know? Why has the information come after the event?

Given this failure to notify anyone of the situation until it was exposed by Sarawak Report, is it not reasonable to ask Mr Santhara to further provide dated email correspondence confirming these advance arrangements – just to pacify those sceptics who are naturally pointing out that the documents he is now brandishing could easily have been backdated?

Meanwhile, despite confirming all the key points of SR’s report on his missing status, Mr Santhara’s various statements over the weekend show that he is very angry with those who have questioned him over the matter – frog hopping mad in fact.

He has threatened to sue over ‘false information’ whilst at the same time has admitted that he did leave for NZ before Christmas, didn’t come home to assist during his constituency floods and has not been available for ministerial duties. Exactly as Sarawak Report had said.

The MP has fumed further, pointing out that he has shown “a 100% attendance record in Parliament” over his entire period in office!  Sarawak Report and others clearly failed to duly recognise this sterling record in his view.

It scarcely needs Sarawak Report to point out that this Caring Government has been so very caring of its MPs that it has in fact suspended Parliament altogether for most of the year since it grabbed hold of office through a political backdoor coup.

Parliament has continued to be suspended thanks to a highly controversial and arguably illegal State of Emergency throughout the period that Santhara has been away. So, it is surely rather an unfortunate matter for Santhara to draw attention to, but he has done so.

So, we are happy to confirm that since for the entire period that Mr Santhara has been absent 100% attendance has equalled zero days, he has achieved 100% attendance. His dutiful achievement is therefore noted.

Meanwhile, one wonders whether during his period in business, acting as the high earning CEO of the company Masterskill, Mr Santhara would himself have approved of such generous terms of employment for his own staff – terms he expects the Malaysian public to offer him after little more than a couple of years on the public payroll?

Would he have allowed 55 days of consecutive unpaid leave to someone appointed as a Minister less than a year before? Would he have cancelled all job requirements in the office for those appointed to representative positions and yet continued to employ them all the same?

If so, one wonders how his company made him such a profit and one wonders how Malaysia hopes to stagger on much longer paying the tribe of parasites who are living off the wider population that increasingly struggles to get by.

Maybe Edmund Santhara would do better to take a leaf out of Ted Cruz’s book and utilise the ‘S’ word after all?  If he is planning to make another try at enticing the voting public it might not be the worst idea on offer.