The Coup Coalition PM, Muhyiddin Yassin, had plainly ordered a terrific chest thumping show for his visit to Saudi Arabia. He was to be seen as centre stage: a key foreign visitor.

With all his Arabian ties, the Foreign Minister, Hishamuddin Hussein, had advertised a diplomatic triumph. And, of course, there was always the Special Middle East Envoy, Hadi Awang, to pull religious strings as well – excepting of course that Saudi Arabia has branded Hadi as the Vice President of an alleged Terrorist Organisation and he will not be on the trip.

Instead, it has all proven a lesson in why not to crow in advance, the sort of moral that the formal purpose of the visit (performing Umrah) ought already have reminded of.

Having told the whole of Malaysia that none other than the Crown Prince would be personally at the airport specifically to greet their PM in the first ‘head of government’ visit to the country since January….

“In a statement, the foreign ministry said Muhyiddin was the first head of government to be invited by Saudi Arabian ruler, King Salman Abdulaziz since the historic Al-Ula Conference in January.” [free malaysia today]

… it turns out that ‘Moo’ had merely tagged onto the arrival of two other heads of state, the Kings of Jordan and Crown Prince of Bahrain, who were given precedence.

Quite why the Malaysian minority leader has chosen to grovel before an alleged axe murderer and genocidal bomber, whom most other democratic world leaders are doing their best to avoid shaking the bloody hand of, is on the face of it rather hard to fathom.

On the other hand, as a minority prime minister who seized office only by betraying his own voters and keeps office only by declaring a bogus state of emergency, it is likely Muhyiddin is finding that he too is rather short of international invitations.

There he is with his VVVIP exempted global travel status and nowhere much to go. So, perhaps birds of a feather just flocked together?

Even so, it seems the Malaysian dignitaries only managed to get their audience with MBS on the final day of the four day trip after timing their arrival at Riyadh Airport at exactly the same moment as the two royals!

Anyone reading Malaysian official statements or Hishamuddin’s breathless accounts on Facebook (complete with a packed photo-gallery) would be forgiven for having understood that the entire Riyadh airport was shut down, the red carpet rolled out and the Crown Prince brought in after hours to extend his welcome, purely to honour ‘PM8′.

Certainly this was how it was promoted in The Edge:

“It was not in the original itinerary. His Royal Highness the Crown Prince has made the decision himself,” Foreign Minister Datuk Seri Hishammuddin Tun Hussein told Malaysian media here.

“The whole airport will be closed as HRH the Crown Prince wants to welcome the Prime Minister there,” said Hishammuddin.

However, the give-away is the reference to the ‘original itinerary’, because it would appear that the gesture was indeed not on the Crown Prince’s planned schedule, since he was primarily at the airport owing to an existing protocol to greet the two other royal visitors – it seems ‘Moo’ got wind and managed to tag along!

Was it Moo who altered his itinerary?

Coverage by the local Saudi media, such as Al Arabya makes clear who the stars of the airport arrivals really were, giving detailed accounts of the meetings between MBS and his royal Arab neighbours. The added encounter with PM8 was for some reason  ignominiously left to the very last sentence of their article of the day:

Later, the Saudi Crown Prince met with Malaysian PM Yassin ahead of talks on Tuesday in Riyadh to sign Memorandums of Understanding.

Never mind, the attendant Hishamuddin has been working his spin machine to trumpet the Tuesday crowning glory of the visit, touted as the quite “extraordinary” graciousness of the Saudi King himself in agreeing to a zoom call with Muhyiddin – FROM as opposed to AT his palace.

Surely, the same intimate honour could have been achieved from Putrajaya?

Hishammuddin had said earlier that the 85-year-old King Salman had never met foreign leaders face-to-face since the onset of the COVID-19 pandemic.

At least, PM8 was able to snuggle down for a photo op with the Crown Prince again later in the day: 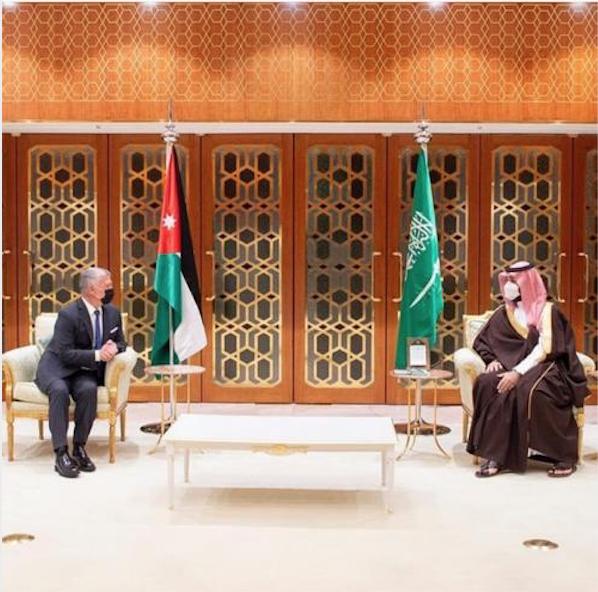 More to the point however, what about those ‘Memorandums of Understanding’?

Malaysians are wondering what commitments the PN leader might have arrived at to sweeten the Saudis, perhaps under the guise of more ‘investment proposals’ in Malaysia?

Today the former defence minister, Matt Sabu, voiced his own concern that Muhyiddin and Hishamuddin might re-engage in the Crown Prince’s bloody and internationally condemned war in Yemen as they did before, sending Malaysian troops back into secret special ops abroad, as during their previous time as BN’s Deputy leader and Defence Minister respectively?

Matt Sabu reminded that these Malaysian troops were sent on dangerous covert missions without even Cabinet approval – the elected PH government had removed them. So what is the full list of memoranda of understanding?

Next stop is the Emirates. So, equally of concern to most Malaysians is what business Moo is planning to get up to in Abu Dhabi?

For weeks Hishamuddin has been negotiating below the radar with the Abu Dhabi Crown Prince (MBZ) to end the case the PH government had brought against the Emirate’s IPIC fund and its CEO, Prince Mansor, (MBZ’s younger brother) for billions of dollars over 1MDB.

However, the PN Coup Coalition have proven every bit as desperate to grovel before and butter up Abu Dhabi as they have Saudi Arabia, whose own princes also milked 1MDB under the guise of generous ‘donations’ to Najib’s election bid (the courts have found the ‘Saudi Royal donation’ to be a lie).

Prepare therefore, for another cut-price 1MDB settlement, this time with IPIC, to be announced as a triumph for bi-lateral relations with the Middle East. Also prepare for a total lack of transparency about what happens to the money.

Coming up in the next few hours?