Did AmBank's Minor Shareholders Just Get A Mugging From All Sides?

Minority shareholders watchdog champion Lya Rahman* is set to meet with AmBank officials later this month to seek clarification on behalf of ordinary shareholders who have been hammered by the $700 million/RM2.83 billion’settlement’ agreed by the bank on 26th February.

By 2nd March the major shareholder in the bank, the Australian ANZ Group which has been unsuccessfully trying to sell out its interest ever since Sarawak Report exposed its role in the 1MDB scandal, had announced it had ‘written down’ its 24% share in AmBank as a dud.

The fine was an acknowledgement of the bank’s complicity in Jho Low’s dodgy market manoeuvres that creamed off some $125 million/ RM600 million from the initial bond issue by 1MDB’s predecessor the Terengganu Investment Authority.

However, many feel the bank failed to fight back landing an excessive share of the blame and punishment. It has left ordinary shareholders with a plummeting investment and a growing suspicion that they have been mugged, whilst the PN government, key figures in the bank and a swathe of outside legal advisors have done nicely out of bludgeoning the board of a domestic institution.

It is understood much of the board initially wanted to fight against the terms that were allegedly rammed through in a matter of just one week once the Chairman and CEO had been brought on side by the government negotiators.

Yet again, the outcome has seen quick dollar cash injections placed at the disposal of ministers at the expense of the public when it comes to accelerated settlements by PN over 1MDB.

Any Delay Would Have Required Disclosure!

AmBank declared in its own briefing on the settlement that it was only given a few days to reach its agreement with the government, apparently accounting for its failure to issue a risk warning to its shareholders:

AMMB Holdings Bhd (AmBank) was only given “a few days” to negotiate the recently announced RM2.83 billion settlement to the Malaysian government for its involvement in the 1Malaysia Development Bhd (1MDB) fiasco, the banking group said in an analyst briefing yesterday….
One analyst who declined to be named quipped that the explanation made sense in a way, because if the negotiation happened much earlier but was not disclosed, then action would have been taken by regulators against AmBank. [The Edge]

However, such explanations were of little comfort as shares plummeted on the news. There have also been concerns that activities behind the scenes were designed to pressure the local bank for the benefit of politicians and informed parties against the interests of investors.

One lawyer close to the deal disputed claims that the bank had been ambushed into a settlement – as has been claimed elsewhere – saying that talks had gone on for months and the final deal was concluded in just two or three days after intense negotiation to reach a conclusion.

A circle of lawyers who are all known to be close friends with links to the prime minister has meanwhile emerged as having worked across all sides of the process during the apparent week of  blitzkrieg against the bank.

Leading for the government side was Rosli Dahlan, who is a close personal friend of the prime minister and seen to have acted as a lynch pin in this case alongside the parallel IPIC negotiations which he is also leading on behalf of the PN government.

It is notable that despite recent criticism from PN circles against the former Attorney General for not using lawyers from the AG’s chambers to handle 1MDB related matters, all of the brought in counsel were from private practice.

Rosli was given charge of the government brief against AmBank together with his partner, DP Naban. For the Finance Ministry and Securities Commission the lawyers Logan Sabapathy and Lim Chee Wee# were appointed respectively. All of these independent counsels are known to frequently socialise during leisure hours in KL’s favoured gathering spots.

More surprising still was the choice of outside counsel by AmBank to handle its side of the case during the blitzkrieg week that apparently began on Monday 22nd February and ended with the announcement of the punishing settlement after the stock market closed on Friday 26th.

It is understood that a close personal contact of Rosli’s partner DP Naban picked the prominent legal figure Mr M. Puravalen to represent the bank. Reports indicate that in the interests of getting a settlement in the tight window that had been agreed, the government lawyers had demanded the appointment of this legal practitioner whom they could work with.

Some might consider this close circle of outside counsels indeed an ambush.

During his week long engagement Puravalen apparently advised the board of the bank to accept the lightening terms demanded by his fellow lawyers representing both the Ministry of Finance and the PMO. It is understood that the Chairman of the Board, Tan Sri Azman Hashim, and the CEO,  Sulaiman Mohd Tahir, supported his approach.

Others on the Board are said to have privately expressed their doubt and concern that pressure had been exerted on the hierarchy of the local bank by powerful government circles assisted by a team of lawyers who all saw eye to eye.

Sarawak Report has learnt a strong proportion of the board had initially intimated they thought the bank would have done better for its shareholders by challenging the settlement in a court of law. However, by the end of the week the pressure had prevailed.

Mass Exodus Of Shareholdings By Insiders

Meanwhile, it has emerged that Rosli Dahlan has confirmed separately to one set of western journalists the the AmBank settlement in fact took several months. This on the basis that you plainly can’t draw up a case of such magnitude and then settle all in one week – even if the final cave-in by the bank was rammed through swiftly.

And it is that obvious set of circumstances that has been raising the most concern for the minority shareholder champions who plan to quiz executives next week.

Lya Rahman says she is calling for a full formal investigation by the Securities Commission (whose boss, the lawyer Said Zayed, is also known to have social ties with the legal players in the case) as it is the only body which can get to the bottom of who in the bank knew what and when?

The probe is justified, she says, because shareholders are entitled to know why no less than seven members of the senior management team at the bank (see five of those circled standing beside the Chairman in the group photo above) suddenly disposed of their personal shares in the bank over one 24 hour period, during the brief trading window between Christmas and New year on 29th/30th December last year.

The date happened to coincide with a spike in prices after a poor year at the 1MDB affected bank after which the price plummeted before falling further again following the announcement of such a punishing settlement. 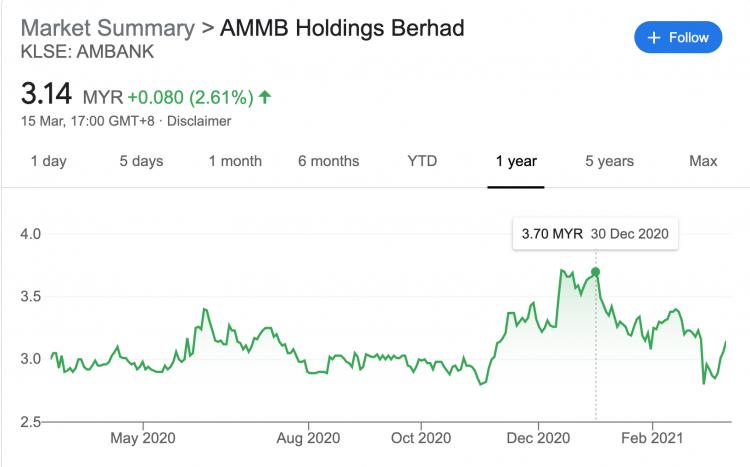 The executives who bailed out of their own shares in the bank included the group’s internal auditor (who is of course responsible for reporting such matters to himself), the group’s chief risk officer and AmBank Islamic’s CEO – all people occupying some of the most sensitive positions in the bank when it comes to overseeing confidential information.

Lya Rahman has told Sarawak Report she will demand to know if such decision makers at the bank knew something others did not about the all important settlement negotiations and whether proper and timely notifications were given of the disposals – some of the sell-offs appear not to have been registered by the bank until the start of this month.

Market watchers globally will likewise be interested to know how the ‘independent’ regulators will handle such concerns and how successfully a local Malaysian bank will be found to have stood up to a cash strapped regime on behalf of shareholder interests.

There is also a concern that the structure of rewards and incentives around this lightening settlement should be made fully transparent. What were the fees paid to the three sets of outside legal teams brought in to handle what some complainants call a stitch up?

This is of particular concern since authoritative sources are suggesting key lawyers on the case were incentivised by a percentage of the fine. Certain of the legal figures concerned have been approached for comment on this matter but so far have not immediately responded. However, Lim Chee Wee has confirmed this was not the arrangement in his case.

Meanwhile, Rosli Dahlan, a close friend of the prime minister who is also representing the Malaysian interests with respect to 1MDB’s claims against Abu Dhabi, has recently indicated that the negotiated settlement with IPIC is to be likewise imminently announced.

He made the point that the PN government regards it as a great success that his legal team has reached swift settlements over just six months with Goldman, Ambank, Deloitte, IPIC after the previous negotiations had come away with nothing.

However, in the case of IPIC Malaysians are tipped by those with inside information on the deal that they should not raise their expectations above a billion dollars in compensation – it is a relatively paltry amount given the Emirate assisted in the theft of a far greater sum than did AmBank from 1MDB.

Updated:
*Lya Rahman is no longer with the Minority Shareholders Watch Group, but acts as an independent adviser to the Institutional Investors Council Malaysia.
#Lim Chee Wee represented the Securities Commission and not MOF