Are you an official in the Federal Territories Department looking for input from your Deputy Minister?  Or perhaps a constituent of Segamat looking for urgent assistance from your MP?

Forget it for now, because the person concerned, wealthy former businessman Edmund Santhara MP, has not set foot in Malaysia this year according to dismayed insiders.

He dived out during lockdown to enjoy Christmas in New Zealand thanks to a little string-pulling in the Home Affairs Ministry, according to reliable reports received by Sarawak Report (he is thick as thieves with Minister Hamzah Zainuddin) and has not so far bothered to return.

Of course, Santhara’s other paid public role is that of a parliamentarian, which he can rightly argue he is no longer able to perform, owing to the closure of Parliament under the bogus pretext of an emergency to do with Covid (all Malaysians know that Parliament is actually suspended because the present coup government no longer has a majority).

With Santhara in New Zealand PN has even less of a showing of MPs of course, since he was one of the handful of defectors from PKR who gave the coup conspirators a fleeting sliver of a majority. That was after GPS and some others had been bought following weeks of bartering once the Agong had appointed ‘PM8′ with his pal Zaifrul to be in charge of the all important finances.

PKR’s former rogue deputy president Azmin Ali had boasted of a far bigger defection to his co-conspirators, such as Hamzah, making the whole plot to overturn the democratically elected government extremely shaky.

However, thanks to Santhara and the Sarawak jumping frogs, the backdoor administration achieved its primary goal of forcing through the all important budget (as demanded by the Agong) thereby giving themselves present billions with which to play, whilst the rest of the country has been intimidated into compliant curfew.

This has turned Santhara into a PN hero. He has been made an honorary member of Bersatu (after all there are issues with his DNA which make full recognition tricky) and more importantly he has been given his plum political job, doubtless full of potential for ‘satisfying policy initiatives’ given all that budget.

Lockdown government has made Malaysia itself very dull however.  A very unrewarding place to live for such a successful political animal, who almost single-handedly overturned a government.

Santhara had already decided his family are better off living down south in a real democracy like New Zealand anyway. They have permanent residence and the kids go to school in Auckland rather than some failing Malaysian outfit where you pass maths with 6% (thanks to his new government).

So, none of that nonsense of sweating it out living in the constituency for him – particularly now the neighbours will have turned less friendly towards himself and the Mrs after he betrayed their votes to bring back the government of kleptocrats they worked so hard to turf out.

Come Christmas, therefore, it appears he understandably decided to join his loved ones in Covid free New Zealand, flying out December 23rd. The necessary ‘business’ pretext must have been easy to cobble together, given all the important to-ing and fro-ing of PN MPs compared to the rest of the country who must continue to live in lockdown.

Malaysians plainly needed him to do urgent public business in New Zealand over Christmas. And he hasn’t bothered to return…. can you blame him?

There is, however, the remaining question of his enormous publicly funded salary, which he is officially supposed to earn by tending to the needs of his constituents and performing ministerial duties. What about that, some might ask, since MPs are at least supposed to give the appearance of performing public duties, even if they are actually concentrating on filling private pockets?

Santhara seems to think he has found the solution. Over the past days, weeks and months his Facebook page has uploaded photos of his “team” going around the constituency handing out government assistance in his name.

There have been pictures of his car, kindly loaned for assisting flood relief. Also a boat with his name on it to deliver food with his name on it. All there on Facebook with his dutiful staff photographed displaying charity to homeless folk flooded from their homes or facing other problems.

Just no sign in all those months of Santhara himself photographed in terra firm in Malaysia, let alone in the more wretched areas of his own constituency.

Not according to certain outraged folk who asked not to be named. As one pointed out floods hit the region in January, but it was his office staff who made the appearance:

“His constituency was hit by floods in January, but he wasn’t there in to help his constituents – all events attended by his PA.  Early January during the Wilayah Day celebration Santhara was awarded Datuk Seri title by the King but he wasn’t around to receive the award as well because he was already in New Zealand by then!” 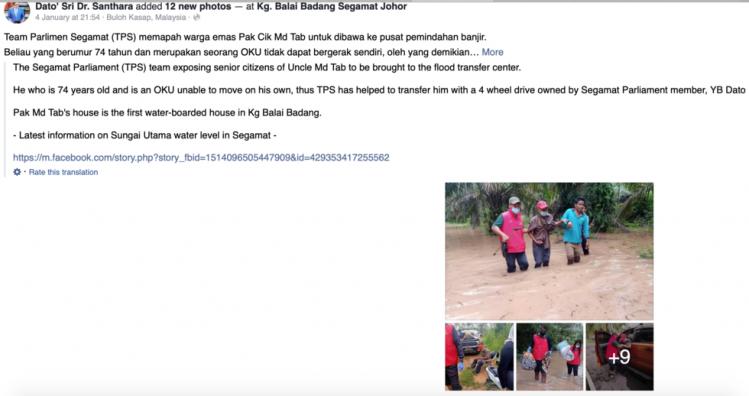 Team Santhara worked hard through the flood, posting good deeds online on behalf of the MP – who himself was absent throughout

If Santhara thinks that thanks to modern technology and the efforts of his ‘team’ he is performing all his duties satisfactorily from the comfort of Covid-free New Zealand, perhaps he would at least care to provide his public explanation?

This way he can at least find out how his constituency and the tax paying public feel after finding out their handsomely rewarded representative has flown out of the mess that he’s in charge of, whilst they themselves are forbidden to leave.

However, talk is he doesn’t care about their reaction because he is already planning to use his PN contacts to execute another hop come election time and move to a more congenial urban seat:

explains one disillusioned insider. So, it looks like “Team Santhara” via Facebook is all his constituents, officials and colleagues are likely to hear from the wealthy MP for sometime yet.