Vaccine Vacillations - Can Anyone Make Head Or Tail Of PN's Claims About Covid Costs?

Pardon people for being cynical, however the prevailing view in Malaysia is that a certain amount of ‘leakage’ (ie contract inflation) appears to be involved in the coup government’s Covid vaccine shopping spree.

Ever changing figures have been bandied about. This might be partially excused given the scramble to purchase a variety of products on the market, however the inconsistencies don’t yet add up.

First, DAP’s Lim Guan Eng questioned the prime minister’s boast that “the government has started rolling out a RM3 billion plan for enough Covid-19 vaccines to immunise 6.4 million of the population”.

At that price, he pointed out each person would cost RM468 to immunise (US$116). Each person needs two jabs, so the cost cited by ‘PM8′ is just under US$60 per vaccine dose.

Given the top list price for the expensive Pfizer vaccine is c$20 per dose or $40 per patient immunisation in the US the opposition leader pointed to the massive projected over-spend.

On these figures the government seemed to be projecting at least a 300% mark up on this desperately needed product for public health, so where is the ‘leakage’ of all this public taxpayers’ money headed as Malaysian lives hang in the balance?

Naturally, ministers resented opposition leaders doing their job by questioning the issue on behalf of Malaysians whose lives are becoming desperate thanks to this disease. Although his party soundly lost in the election (owing to public revulsion over corruption and kleptocracy) Khairy Jamaluddin is now back as Science, Technology and Innovation Minister and he angrily rebutted any insinuation of over-spend.

Having barked at Lim Guan Eng online, Khairy held a press conference just before Christmas to give out a completely different set of much lower figures. He dismissed the RM3 billion referred to by the prime minister as being a ‘contingency’ figure, whilst at the same time acknowledging Malaysia has signed a deal for 12.8 million doses of the Pfizer vaccine (which would immunise the 6.4 million people referred to by his prime minister).

What Khairy ‘clarified’ overall was that in fact RM2.05 billion was being spent to vaccinate a total of 26.5 million Malaysians/ 82.8 per cent of the population (silly PM for being so misleading by referring to less people and more money).

These revised figures would amount to a cost of RM77.35 (US$19.23) per immunisation, which is considerably less than the highest prices being quoted for the most expensive vaccines but some complained (wrongly) it was more than what the EU/Belgium was said to be paying at €12/$15  per jab for the Pfizer product, which is one of the most expensive. A single immunisation needs two jabs: 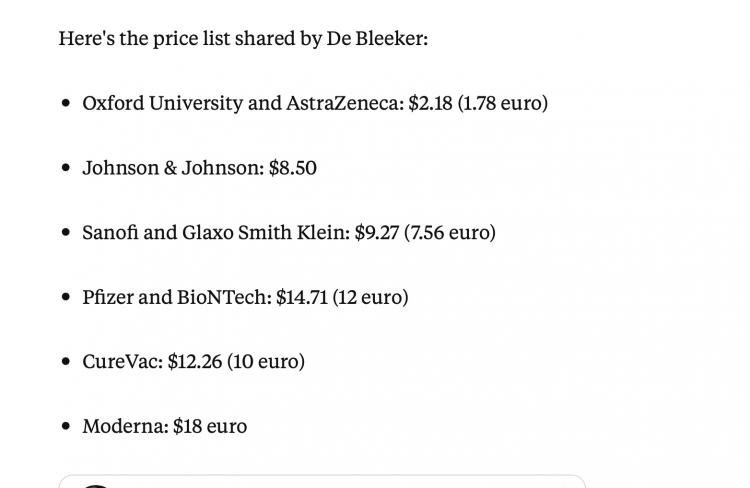 However, Khairy’s figures remained woolly, given he had not actually specified how much Malaysia had spent on the Pfizer vaccines and how much it planned to spend on other vaccines to reach that projected RM2.05 billion to immunise 26.5 million people. So, the questions continued to flow.

Hence, at the start of last week a ‘clarification’ was issued in the form of another ministerial statement, this time in Parliament by Deputy Finance Minister Mohd Shahar Abdullah who waded in to tell MPs that it was not true that Belgium had got a better deal than Malaysia.

Sadly, the last thing this statement does is ‘avoid confusions’ as it does not appear to compare like with like. One suspects that it was in fact deliberately designed to completely confuse people.

In the first place, if Malaysia has bought 26.5 million vaccine doses then, as the minister describes in the case of the Belgian example, these will only be sufficient for half that number of people since they need two doses.

So, unless the minister in fact meant to say that Malaysia has purchased 53 million Covid 19 vaccines to immunise 26.5 million people at the said price, it is in fact costing Malaysia RM155 to vaccinate each person (nearly double what Belgium is paying).

If that is the case then Malaysia will have to buy the same again to vaccinate the full 82.8% of the population as advertised – which would actually amount to RM4.10 billion.

Yet, even if we were to give the minister the benefit of the doubt pending a ‘correction’ and assume he meant to say that the government has paid RM2.02 billion to obtain 53 million vaccine doses it would still be a misleading statement.

This is because he is claiming a per person immunisation cost of slightly less than what Belgium has purportedly paid to immunise its own population with the top expensive Pfizer vaccine already on the market in order to claim that the country is getting value for money under this PN procurement exercise.

HOWEVER, Malaysia unlike Belgium is clearly not expecting to immunise the entire population with this very expensive vaccine. Indeed only about a quarter of the procured vaccines appear to have been ordered from Pfizer according to what little evidence has been produced so far.

Both the prime minister and Khairy implied a total of 6.4 million immunisations (12.8 million doses) have been ordered from Pfizer out of the 53 million doses needed to immunise the 26.5 million people cited by both Khairy and the Deputy Finance Minister.

” The government so far has secured a deal with Pfizer to purchase 12.8 million doses of its Covid-19 Pfizer-BioNTech vaccine. It also recently signed an agreement with AstraZeneca for the procurement of 6.4 million doses of its vaccine …. the vaccines brought from the Covax facility, AstraZeneca and Pfizer should be able to cover 40 per cent of the population. As for the remaining 42.8 per cent of the population, he said they would benefit from negotiations that the government had finalised with other pharmaceutical companies.

As everyone knows, most of the other vaccines on the global shopping list are way way cheaper than Pfizer (see above). The UK’s AstraZenica product has already been licensed and is designed to be marketed for a mere €2.5/$3/RM12 (max) a dose i.e. a mere RM24 for a full two jab immunisation at most. Other Chinese and Russian vaccines options are likely to come cheap onto the market as well.

So, were the Deputy Finance Minister to do a more honest calculation to prove cost efficiency compared to Belgium he should take into account that three quarters of his 26.5 million immunisations could be achieved at RM24 each – a total of just RM480 million.

That is a lot of money, but nothing like as much as the RM2.02 billion that the government is proposing to pay out for this number of immunisations. Even adding in the upfront 6.4 million immunisations alleged to have been obtained for RM77.35 [$19] you would only need to have spent another RM495 million. The total RM975.

That leaves more than a 100% potential mark up (over a billion ringgit) on the amount being shelled out for this procurement than what market prices would suggest – not such an amazing deal for the hard-pressed taxpayer after all?

Even if the Deputy Finance Minister did get his doses muddled as he bragged about under-cutting Belgium, which would mean that actually Malaysians are paying almost double for the Pfizer vaccine rather than less than half, that would still leave at least half a billion ringgit overspend that needs surely to be explained.

So, it is time the government clearly laid out all instead of just some of its figures and issued any corrections needed, instead of giving a very good impression of seeking to mislead the population and thereby hide an enormous overspend on badly needed Covid vaccinations. 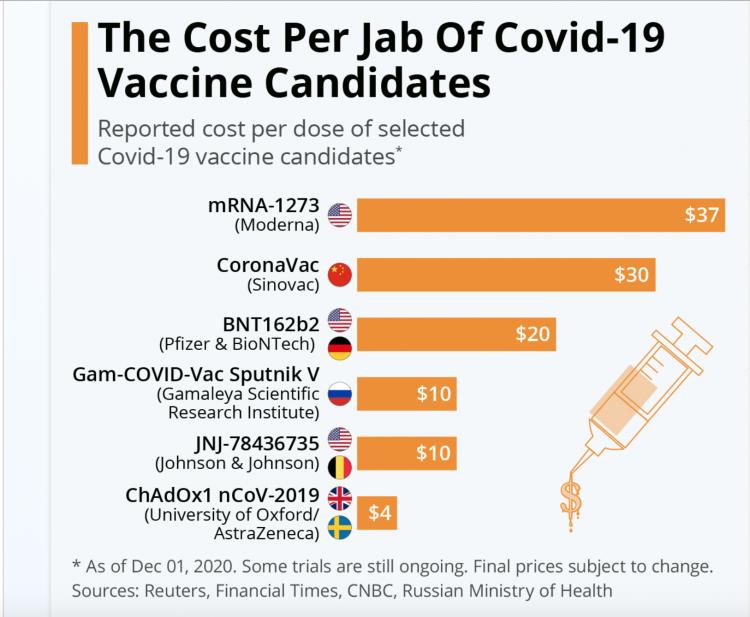 $20 = cRM80 – what is Malaysia really paying for the two jabs needed per person?