Malaysia's Environmental And Human Rights Record Can And Must Be Transformed

This week an in-depth report by the news agency AP has shone more much needed light on the oil palm industry, focusing this time on the appalling human rights concerns relating to mainly migrant workers on top of the continuing concerns about environmental destruction by these major plantation companies.

Sarawak Report has seen and heard enough of the hardships meted out on exploited workforces particularly in Borneo, Papua New Guinea and Indonesia by the same relatively small number of interconnected and largely Malaysian companies to have been surprised by nothing in this report about the abuse of women on plantations.

Forced to work for long hours in appalling heat on hard manual jobs, these vulnerable workers are often denied basic rights of secure employment, reasonable pay and care. The ‘golden crop’ that has for years paid out fat profits for shareholders and made billionaires out of tycoons has broken backs and lives of those who ought to have at least secured a safe living from their daily sweat and toil. 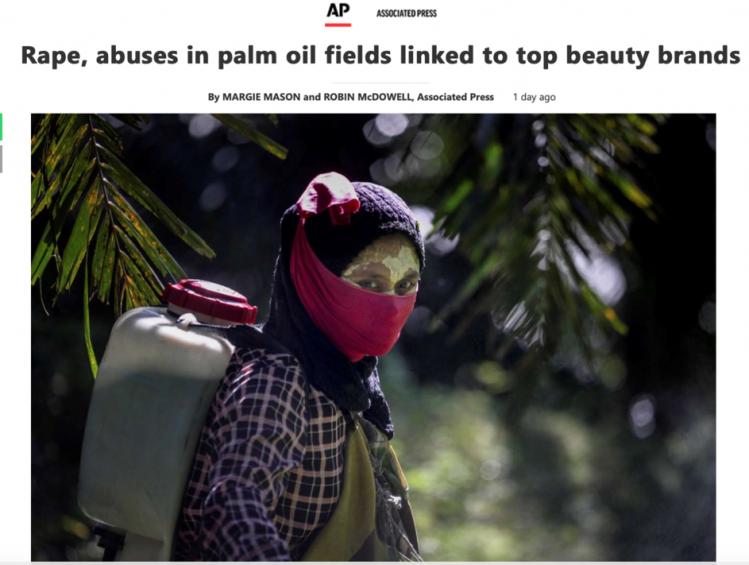 The report details poor safety conditions, sexual abuse of women and girls and the callous treatment of mothers and pregnant women. It also confirms that the outrageous lack of basic measures, already noted by this blog, to shield workers against the toxic chemicals they are required to spray day in and out is the industry standard.

Children born to these vulnerable women have too often grown up uneducated, destined instead to assist their mothers from an early age on the plantations offering them precious other options for their adult life.

In the modern world in advancing democracies and economies this is not a state of affairs to be tolerated. The responsibility lies largely with major companies which have made vast profits and with failures of government regulation – both entities have in the past met criticism with angry rebuttals and denials, seeking to vilify the messengers from the media and NGOs. Meanwhile, they have turned a disgraceful blind eye to the gross cruelty and widespread abuse of vulnerable people.

Self-serving propaganda has been used to rile up domestic public opinion into believing that global concerns about modern slavery on mass plantations and the needless environmental devastation caused by careless and corrupt practices are merely the accusations of ‘rival business concerns’.

They are not. The palm oil industry needs to clean up its act because the world has become aware of the shocking truth.

Today, one major Malaysian company, Sime Darby, has issued a mature and cautious statement acknowledging the report and pledging to make proper investigations into references to their own plantations. That is how the international community expects responsible capitalism to react to such shocking reports.

This is a step in the right direction but it contrasts with the far more common approach which has been to deny and denigrate such reporting, and attack the messengers.

There is a right way and a wrong way to conduct a business and it is time Malaysia addresses these human rights and environmental problems, if only to urgently protect the reputation of a key industry that has developed a catastrophic image in the wider world, which is sadly deserved.