More Back-Peddling Over 1MDB By The PN Government?

It appears that another scandalous dereliction must added to the list of PN reversals of Malaysia’s earlier progress in recouping the missing billions from 1MDB.

In May of this year Sarawak Report scooped yet another major angle on the story, identifying billions that had ended up in Kuwait, a previously unknown bolt-hole used by Jho Low as he sought to lander the stolen cash.

[First, anyone still inclined to believe ex-PM Najib Razak’s denials of guilt over 1MDB should watch the US Department of Justice announcement last week confirming the bank Goldman Sachs has pleaded guilty to the crime of knowingly assisting Najib and Jho Low to steal the money and launder it and has paid unprecedented multi-billion dollar fines in return for the deferral of criminal prosecutions – not something the world’s top bank is likely to have acceded to if they, Najib and Jho Low were innocent]. 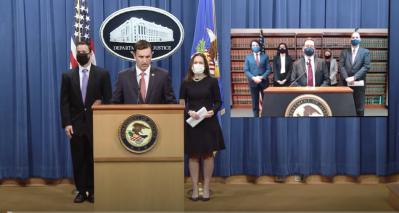 Announcing the settlement at the DOJ

Thanks to new information coming out of the Arab state, Sarawak Report successfully identified that In 2016, whilst on the run from the unravelling scandal of 1MDB, Jho Low identified a new partner willing to act as his front for laundering billions of dollars of stolen money.

That partner was none other than the son of the then Kuwaiti prime minister, namely Sheikh Sabah Jaber Al-Mubarak Al-Hamad Al-Sabah (Sheikh Sabah).

Sheikh Sabah connected with Jho Low in early 2016 and engaged in a number of enterprises linked to purported plans to spearhead billions of dollars of Chinese investment into Kuwait.

In fact, the money that arrived in the Sheihk’s bank accounts was public money stolen from Malaysia, including over a billion dollars raised by Najib’s Finance Ministry under the guise of upfront payments for petroleum pipelines to Chinese state companies which were already involved in massive 1MDB related kickbacks from the East Coast Rail Line.

The money from Malaysia was then funnelled by the Chinese construction company CCCC through a bogus ‘Silk Road Southeast Asia Real Estate Ltd” company in the Seychelles, owned by the Sheikh himself, into his personal and business bank accounts in Kuwait.

Much of the money was then channelled straight back to the Ministry of Finance in Malaysia with which to pay Abu Dhabi (an earlier partner in the thefts), but plenty stayed with Sheikh Sabah. 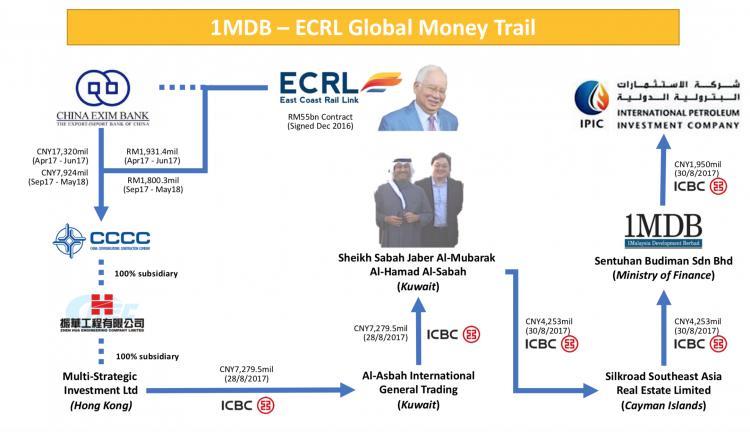 Sheikh Sabah then went on to front numerous payments that Jho Low badly needed to make to law firms and others across the globe who were acting on his behalf, given the fugitive could no longer directly transfer cash.

Sarawak Report’s exposes created a major scandal in Kuwait, especially as we also revealed how earlier requests for assistance in investigating the matter by Malaysia’s post-GE14 PH government in 2018 had been rebuffed by the then Kuwaiti authorities. Sheikh Sabah was interviewed but the case was closed and the Kuwaiti government informed the Malaysian authorities they had investigated and found no wrongdoing.

Sarawak Report related that in fact the Kuwaiti money laundering authority had charted numerous suspicious transactions linked to Jho Low from the powerfully connected Shiekh’s accounts totalling billions of dollars, built up from the round-tripping and layering of funds. The head of the Kuwait Money Laundering Authority is believed to have resigned in protest.

Critically, by the time Sarawak Report brought the matter to public attention in May, Sheikh Sabah’s father had been forced to resign as prime minister over unrelated corruption matters. The new government responded to public opinion by re-opening the case and offering to collaborate with Malaysia’s enquiries.

As Malaysians are of course aware, however, Malaysia had experienced its own backdoor coup in February. The current PN coalition is made up largely of parties implicated in the previous corrupt government and it set about almost instantly attempting to “settle” the various embarrassing cases related to 1MDB.

The case against Abu Dhabi’s IPIC, where Malaysia had won considerable headway, has been frozen in the London courts pending undisclosed negotiations. A giveaway deal was arranged with Goldman Sachs who arguably owed Malaysia itself some $9 billion, according to prosecutors under PH.

Najib’s son, Riza Aziz, who stole hundreds of millions to fund his movies, has walked free. And now it appears that the Malaysian anti-corruption authorities have simply left unanswered the offer of collaboration by Kuwait regarding the billions of ringgit in Sheikh Sabah’s accounts which are believed to be the proceeds of laundered thefts from Malaysia and 1MDB.

Whistleblower Bachar Kiwan has informed Sarawak Report that he was invited in July to produce his evidence to Kuwaiti investigators on the case. Earlier in May Kuwaiti news organisations reported that the country’s authorities had made a direct approach to the Malaysian authorities to request collaboration on the matter of the suspicious billions:

This was how the matter was reported in Erem News in July [translation]:

Kuwait asks Malaysia to participate in the investigations of the “1MDB Sovereign Fund case.”

Public Prosecutors in Kuwait have called on the Malaysian judicial authorities to participate in the ongoing investigations of the famous suspicion of corruption case known in the media as the “1MDB Malaysian Sovereign Fund”, by submitting documents and evidence related to the case to reveal its full circumstances after about three months from the start of the [Kuwait] investigation.

An informed source told the Kuwaiti newspaper, Al-Qabas: “Sending documents from the Malaysian side and showing how the suspicion of money laundering occurred and sending money accurately will be a strong basis for the evidence of the indictment, and the demanding of the recovery of all the sums charged by the accused, and the return of double those amounts, in addition to the claim. To imprison the accused when the evidence against them is complete.”

The newspaper quoted high level sources saying “that the Central Bank of Comoros has put its hand on the Federal Commercial Bank, which is fully owned by the main accused in the case, Sheikh Sabah Jaber Al-Mubarak, because of these events the bank is going through due to the lack of liquidity and lack of cash reserves.”

The sources said, “The Comorian Central Bank will run the Federal Reserve for six months, until a treatment for its problems is found or it is declared bankrupt. “The bank is entirely owned by the accused Sheikh Sabah since 2015, and before that, he owned it in partnership with the French businessman, Bashar Kiwan.”…..

The issue of the Malaysian Sovereign Fund was raised by MPs and observers last May, where it was pointed out that “Kuwaiti personalities and institutions were involved in illegal deals related to projects outside the country,” after which supervisors were formally assigned to examine and review transactions related to the case.

Earlier, three of the defendants in the case, Sheikh Sabah Al-Mubarak, Hamad Al-Wazzan and the lawyer Saud Abdul Mohsen, were detained for investigation, and a few days later, all of them were released on bail.

Investigations are still ongoing in the case, while the National Assembly announced earlier this month, the formation of a parliamentary investigation committee of three deputies to investigate the case, provided that it submits its report within two months.

The case’s origins date back to previous years, according to a Malaysian report, previously reported by the Kuwaiti newspaper, “Al-Qabas,” which revealed a financial relationship around which suspicions revolved between Kuwaiti personalities and “Joe Lu”, the Malaysian financier, who the Malaysian prosecution says is linked to a corruption scandal in the sovereign fund. Malaysian.

The report stated that a lot of money was transferred to “Joe Low”, through companies controlled by Kuwaiti personalities in 2016.

A key whistleblower in the affair, Bachar Kiwan, who has now escaped to France has himself said that he was originally by the anti-corruption authorities to provide urgent evidence on the matter, once the Malaysian authorities responded to these requests.

Subsequently, he says he was told that Kuwait prosecutors no longer require his assistance.

“For months I have heard no more about this. It seems the Malaysian authorities are giving prosecutors in Kuwait an excuse to drop their investigations into this major money laundering case involving powerful and wealthy royals in the Middle East”

However, Sarawak Report has learnt that as of now Malaysia has simply failed to respond to Kuwait’s official requests for information, leaving that country’s investigation high and dry. Parliamentarians in Kuwait and reformers seeking to deal with the country’s own issues of corruption (encouraged by these Malaysian actors in the case of 1MDB) are said to be angry and frustrated.

And so should Malaysians be angry and frustrated. Without cooperation (which the previous government had eagerly sought to provide) there will be little prospect of restoring those stolen funds and gaining any extra penalties to help the dire financial straits these thefts have landed on the country.

Malaysia’s motives under the new PN government in stalling this welcome new development in Kuwait are therefore puzzling and frustrating for all concerned. Observers are left to speculate who is helping whom by this silence and obstruction and the missing of yet another opportunity for Malaysians to get back their cash?