Why has no arrest warrant and Red Notice been issued for Jho’s key pal Phengphian Laogumnerd?

Sarawak Report flagged up the Thai national and identified him as a key facilitator for Jho Low back in 2017 and the Singapore authorities cited him in open court as a fellow traveller of Jho back in November 2016.

The young party goer was a regular feature in the Jho Low entourage, having apparently been part of his ‘gang’ from his days at Wharton College in the United States. It is believed he may be a relative.

He took part in the notorious New Year party bash of 2013 when Jho Low flew his pals (on stolen 1MDB money) via a hired jumbo jet from Sydney to Las Vegas in time to celebrate the moment twice, for example, and various other jamborees in Bangkok.

Sarawak Report therefore noted the suspiciously coincidental arrival of Laogumnerd as the Chairman of the newly established ‘first Islamic Bank’ in Mauritius, Century Banking Corporation, in November 2016 just as the heat had been turned up on Jho Low after the Department of Justice seizure of 1MDB assets. Shortly after he took over there was a huge injection of tens of millions of dollars into the bank.

Why an ‘Islamic bank’ and why so many Malaysian nationals on the team Sarawak Report could not help but wonder? Of course, Jho Low’s imperative to control his own bank had reached somewhat desperate levels by this period, given the international banking system had closed against him once he became a notorious financial fugitive over 1MDB. What better than an off-shore ‘Islamic’ bank to foster his connections with Najib and his Middle Eastern network?

In June this year Sarawak Report finally confirmed such suspicions after obtaining details of the Kuwaiti investigation into Jho’s other key front man in Kuwait from 2016, namely Sheikh Sabah Jaber Al-Mubarak Al-Hamad Al-Sabah (Sheikh Sabah) son of the then prime minister.

According to documents sighted by Sarawak Report, the Kuwait Anti-Money Laundering Agency recorded suspicious transactions of over a €150 million sent to the Century Banking Corporation in 2017 as part of what the Kuwaiti experts described as a classic money laundering exercise.

The money was part of billions that had arrived into Sheikh Sabah’s account, now identified as having come from Chinese kickbacks organised by Najib Razak via projects procured through his Ministery of Finance in Malaysia. Much of the cash went back to Malaysia to pay off debts to Abu Dhabi, but a very large amount had remained in the Sheikh’s personal accounts.

Following Sarawak Report’s exclusive the Kuwaitis arrested Sheikh Sabah and are currently reviewing the details of their earlier investigation, which appears to have been suppressed before Sarawak Report exposed its findings.

Little surprise therefore that the Mauritius regulators have finally revoked the licence for Century Bank. Off shore island regulators in particular appear remarkably blind to misdeeds until they are impossible to ignore.

Top respected law firms in New York, London and elsewhere have proved equally poor sighted when it comes to Jho Low and 1MDB it would appear. Using open source information Sarawak Report frequently pointed to Laogumnerd’s role in helping out Jho Low as an effective proxy.

In 2017 he took over ownership of the Myla women’s underwear company from Jho Low, which housed its offices in the suite of buildings also acquired by Jho Low in Stratton Street, Mayfair under a New Zealand trust, now seized by the FBI.

We also reported how Laogumnerd acquired and then fire-sale’d a multi-million dollar New York penthouse in a carbon copy of Jho’s own real estate ventures … using the exact same off shore methods and New Zealand law firms as Jho himself.

Sarawak Report has moreover highlighted how Laogumnerd’s connections in Bangkok may also have assisted Jho, Najib and their contacts in PetroSaudi to manage the arrest and ongoing incarceration of the PetroSaudi/1MDB whistleblower Xavier Justo from 2015.

Yet, despite the wealth of such information and evidence about Laogumnerd’s dubious and apparent proxy status relating to Jho Low, law firms like Kobre & Kim were until recently  willing to accept the Thai national as an anonymous ‘principle’ from whom to receive payments of tens of millions of dollars to finance Jho’s legal and lobbying campaigns in the United States, UK and elsewhere.

Indeed, it is abundantly clear that from 2016 Laogumnerd and Sheikh Sabah were acting as the two front men lending ‘respectability’ to payments on Jho’s behalf and thereby enabling them to be received by Kobre & Kim through the international banking system. While the banks may not have been aware these were payments for Jho Low’s various lobbying and PR campaigns, the law firm obviously did as it managed the payments.

By May this year Sarawak Report had so thoroughly exposed the relationship between Jho Low and Sheikh Sabah as his conduit that it seems that that the law firm decided to abandon any subterfuge in the matter of who was fronting up those bills.

In their latest filings under the US Foreign Agents Registration Act Kobre & Kim dropped the anonymity given to the ‘foreign principles’ whom they had previously refused to identify but admitted were paying Jho’s expenses out of “friendship”.

Their most recent submission to the public records on June 15th not only named the Sheikh for the first time but added a further shock confirmation over the role of Laogumnerd: 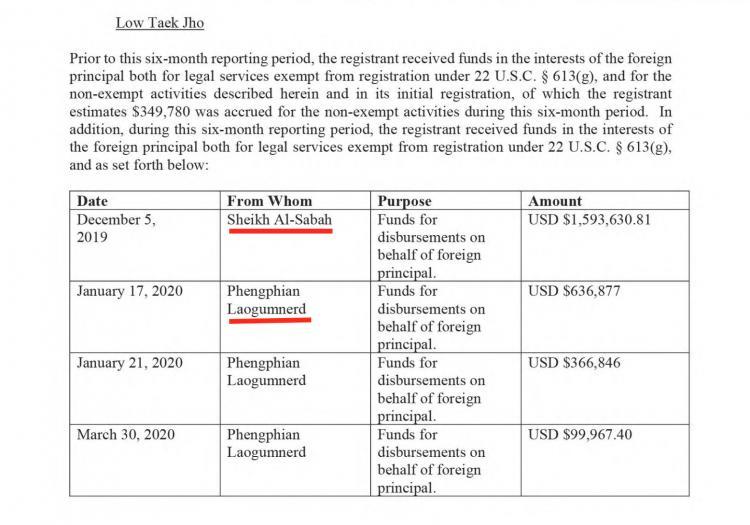 This admission by Jho Low’s esteemed and enormously highly paid legal support network surely leads to one overwhelming conclusion. Mr Phengphian Laogumnerd is in possession of all the information any searching detective might wish to have about how to make contact with Jho Low and indeed pin him down for a well-deserved arrest. He is the latest known intermediary with his law firm

The authorities in China have said they have no idea where Jho is hiding, even though he has been lobbying on China’s behalf regarding top matters of state, most specifically China’s desire to extradite the billionaire fugitive and client of Steve Bannon, Guo Wenghui, who has taken refuge in the US.

However, Phengphian Laogumnerd most certainly does know where Jho Low is and also how to access Jho Low’s cash.

Phengphian Laogumnerd is also plainly in violation of numerous money laundering laws himself and should therefore, at the very least, have been hauled up for questioning just like Sheikh Sabah by the Thai authorities or on their behalf.

Or has Phengphian Laogumnerd also himself now disappeared into hiding?  Perhaps the Bangkok authorities might care to comment.

On a final point, whether Phengphian Laogumnerd is now himself a fugitive or merely the head of a dubious bank whose licence has now been removed, how do proud and upstanding legal firms like Kobre & Kim justify continuing to receive payments from this Thai front man on behalf of the world’ most wanted financial fugitive?

Sarawak Report has placed that very question to Kobre & Kim and will publish any response they may provide.