What Has Happened To The Supreme Court Decision Over IPIC?

Today the new Malaysian Attorney General  issued a statement about the 1MDB/IPIC court case that sought to deny something that Sarawak Report never said.  Yet at the same time the statement effectively confirmed our article over the weekend, which reported the case has been put over to negotiations outside of court.

“No action has been taken to stop the proceedings of the Court in London against IPIC” was what the AG thundered (at least “for now”).

However, Sarawak Report had not suggested the proceedings had been “stopped”, merely that both sides had applied to have them put on hold whilst negotiations got underway. This is a perfectly normal process and would have been agreed to by the court.

Indeed, the AG appeared to immediately give the game away by conceding in his next sentence that:

“The Government is always open to consider any solution….. Accordingly, discussions are always held between the two governments, including during the PH Government as well as the current government’

The AG Chambers would like to confirm that for now, no action has been taken to stop the proceedings of the Court in London against IPIC which has been taken to cancel the Settlement Agreement between 1MDB and IPIC entered into in 2017.

The Government is always open to consider any solution if there is a bid that is in line with the principles and responsibilities of the Government of Malaysia, which is to ensure the country’s assets are returned and at the same time justice is upheld.

Accordingly, discussions are always held between the two governments, including during the PH Government as well as the current government. This discussion only involves Malaysian Government and UAE government officials without the involvement of any other party.” [translated]

It would seem likely, therefore, that the PN government is indeed hoping to get the IPIC case off its plate, just as it did with Goldman Sachs and Riza Aziz. However, the consequence seems bound to be another rotten deal for Malaysian taxpayers and more cosy culprits off the hook.

The new PN/UMNO government of Malaysia is plainly every bit as anxious as the BN government was in 2017 (and the leaders of Abu Dhabi have always been) to keep the embarrassing details of UMNO’s cover-ups over 1MDB out of open court.

After all, Najib’s government ended up paying the Abu Dhabi fund, headed up by Sheikh Mansour and his brother the Crown Prince Mohammed, a smidgeon under US$6 billion, first for a bogus guarantee and then to cover-up how the ‘guarantee’ was used to steal billions from the 1MDB/Goldman Sachs bond issues.

Sarawak Report has recently exposed how a large chunk of these payments were obtained in 2017 by vastly inflating government contracts with Chinese state companies and then funnelling kickbacks through a Kuwaiti royal to be then paid on to Abu Dhabi. 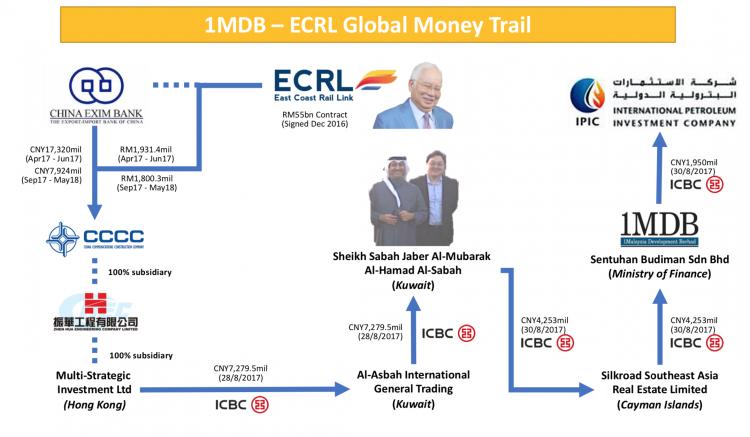 The money flows to IPIC

Yet suspending the court action to enable both parties to spare their blushes will remove the most powerful bargaining weapon that the previous AG had managed to obtain for Malaysia, namely an Appeal Court ruling that the matter should be tried in an open court in London (which the PH government, unlike Abu Dhabi and Najib’s cronies had no reason to fear).

Abu Dhabi had fought like mad to keep the whole process behind closed doors in a private arbitration court, just like the original settlement by Najib in 2017 which had ended up costing Malaysia so many billions. However AG Tommy Thomas won a landmark victory on November 19th to put the matter in the High Court, where the world’s press could follow it step by step.

Abu Dhabi could well have ended up paying the full $6 billion to get rid of a case that held such threat of exposure over the royal managers of the IPIC fund. However, with the UMNO old guard back in charge the desire for secrecy seems to have returned with Malaysia’s main bargaining tool laid unnecessarily to one side.

AG Should Expand His Statement – Urgently!

However, if this is not the situation and the AG is claiming not only that the case has not been “stopped” but has not even been suspended pending the negotiations he openly admits are going on, then he must urgently expand his public statement. He should urgently and fully explain the exact present status of the case against IPIC.

If the case is ongoing and being actively pursued at this very moment by Malaysia, then Sarawak Report would indeed be proven to have misreported. However, this raises the major concern that the case itself must have gone shockingly adrift given months of inaction by the Supreme Court.

In short, after almost ten whole months there has been not a single published development in the case since the UK Court of Appeal turfed out Abu Dhabi’s plea to have the it tried secretly on November 19th.

The emirate’s lawyers said they planned to appeal to the highest Supreme Court. However, there are clear and strict timelines for such appeals given that litigants such as Malaysia deserve to see justice without the matter dragging on unnecessarily.

Under these clear rules of the Supreme Court any such application had to be made within 28 days of the Appeal Court judgement [UKSC practice direction 1 sec 1.2.9].  After that there was at the very most a period of 8 weeks allowed to provide documents (the Court prefers them to be provided within one week and reasons must be given and agreed for delay) [UKSC procedures sec.3.2.3] .

Following this, the review panel of three Supreme Court judges is generally committed to providing a decision as to whether or not the court will take up the matter (or leave it with the judgement of the Court of Appeal) within 8 weeks [UKSC procedures sec. 3.4.3]

Even if we were to add a Christmas break and some Covid 19 disruption into the mix, at the very latest Malaysians ought to have expected to have received the decision from the UK Supreme Court about whether it would hear the case around May 1st.

This has not happened. The Registry of the Supreme Court has today confirmed to Sarawak Report that the case was indeed lodged by IPIC. However, the matter is still ‘proceeding’.

This can only mean one of two things. Either it is correct that both parties have agreed to request the court to put the case on hold pending the negotiations, as Sarawak Report was told, or Britain’s highest court appears to have fallen into a state of scandalous inefficiency and delay.  This despite proud claims that the British legal system has by and large successfully managed the challenges of Covid 19.

If Malaysia has indeed been short-changed by the British Supreme Court or there is some abnormal issue to do with the management of the case, leaving it held up with the AG still impatiently waiting to press on with the now long delayed case in the High Court, then it is high time he made a public complaint and demanded justice.

Why is he wasting more time simply issuing statements that misrepresent what was written in Sarawak Report?