Birds Of A Feather Flock Together?

The new Finance Minister, Tengku Zaifrul was appointed thanks to his lofty connections not because of his political experience, indeed he is not even an elected MP.

This week the inexperience told as he plunged into a deep political trap that might well have been laid by craftier operators than him. He shows no signs of clawing a way out.

It began in Parliament on Monday. Zaifrul’s fellow PN coalition members have grown restless, seeking counter-accusations against those they turfed from office, in order to deflect from the mountains of charges of illegalities laid against themselves for past corruption and misdeeds.

Former Finance Minister, Lim Guan Eng, is their top target and has already become the butt of a swathe of corruption smears, police reports and now dubious charges.

So, on Monday afternoon Zaifrul took the bait to push the accusations further.

Ahmad Maslan MP (himself facing money laundering charges) set up the moment by archly questioning his senior colleague if any Direct Contracts (ie. not subject to open tender) had been awarded under the PH government?

What an opportunity to show up the reformers from the deposed elected government who had sought to enforce transparency and abolish the scourge of dirty ministerial backhanders – those so-called ‘negotiated’ Direct Contracts!

Smugly, Finance Minister Zaifrul answered that indeed he could report (since he had clearly prepared for this question and reply) that no less than RM6.6 billion worth of Direct Contracts had been awarded across some 101 negotiated contracts during the short period PH held office before the backdoor coup.

Zaifrul accused his predecessor Lim Guan Eng of having deceitfully signed them off in contravention of his proclaimed drive for open government.

His followers were jubilant as Parliament erupted with heckling MPs. Later cyber-troopers crowed, why did not Sarawak Report expose the RM6.6 billion, instead of just hounding poor, convicted Najib Razak?

But soon the horror dawned. It was not for the likes of Sarawak Report to come up with the details as the former Finance Minister and his political colleagues pointed out, it was for Tengku Zaifrul to publish his own report, which he clearly had not properly read himself.

Meanwhile, Lim Guan Eng published a table of just 12 such ‘negotiated’ projects sponsored by the previous BN government that dwarfed Zaifrul’s figures at the staggering total cost of RM139 billion! 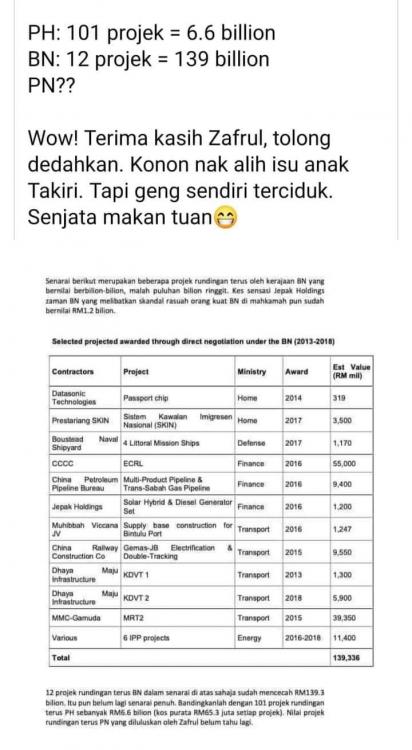 By the following day the former Prime Minister and Finance Minister were taunting Zaifrul to publish his ‘101 list’ in full.

They pointed out that almost 70% of the entire RM6.6 billion related to five so-called legacy projects that had actually been ‘Directly Negotiated’ by his own PN colleagues under the prior BN government.

Given the original projects were so vastly inflated PH had successfully negotiated them down, but were unable to discard the contracts owing to the lock-in clauses agreed to by BN.  Zaifrul’s list treated them as if they were new outrages instead of a mitigation of old outrages committed by his own colleagues.

The largest of these was Phase 2 of the Klang Valley double-tracking project which was signed up to on the last day of the BN government, awarding Dhaya Maju LTAT Sdn Bhd an astronomical RM5.265 billion, which PH pared down to RM4.475 billion.

“Zafrul should be praising the Harapan administration because we saved RM790 million in taxpayers’ money,” said Lim Guan Eng

Who Signed Off Those Contracts?

It then got even more awkward for Zaifrul and his colleagues. Laying out his figures from his own administration the former Finance Minister pointed out that most of the remaining expenditures also related to events that had taken place under the previous government, expenses that needed to be honoured.

Only 5.3 percent of the RM6.6 billion involved “new” directly awarded contracts undertaken by the Harapan government, amounting to RM352 million, Lim said, and half of that amount was for a new solid waste transfer station in Jinjang Utara.

It was not himself, the Finance Minister, who signed off that contract, but the leading PH defector and celebrated side-kick of the chief coup conspirator Azmin Ali, Zuraida Kamaruddin.

So, if there is blame to be levelled it points right back to PN which has clearly attracted the chief personalities who appear to have let the side down for the elected government in more ways than one!

“Perhaps it’s better for the minister, who has refuted claims of being involved in direct awards, to explain what happened,”

suggested Lim Guan Eng. Indeed. He then went on to explain most of the other list of directly awarded contracts, making the point that Harapan’s election pledge was never to do away entirely with direct contracts, which were needed in some specific circumstances such as those he’d cited, but to conduct open tenders as widely as possible.

As the unravelling of Zaifrul’s ‘masterstroke’ continued, Zuraida herself countered with a line from Najib’s own playbook. She had not known about the RM170 million contract signed off by her department, she said earlier today (having suggested only yesterday that there had been no such contracts from her ministry):

Oh dear. What more can one say?

Faced with the inevitable, the shamed Finance Minister had little option but to release the details of the 101 projects and did so yesterday.

Reporters scoured the figures as the accused opposition leaders drummed their fingers waiting for what would further be revealed.

The second largest figure on the list of covertly negotiated contracts soon leapt out. It was a fat RM270 million contract awarded to Datasonic Technologies Sdn Bhd (DTSB) to supply biodata chips used in Malaysian passports.

The very same company has only recently hit the headlines as its then CEO, Abu Hanifah Noordin, has been implicated as one of the crony insiders caught paying ‘donations’ to a bogus foundation run by the present UMNO leader Zahid Hamidi.

Zahid (in between leading the largest political party in the PN coalition) is now in a middle of a corruption trial regarding this and some 47 other charges relating to abuse of trust, theft and money laundering whilst he acted as Home Minister for the prior BN government and Deputy Prime Minister as well.

Questioned as a witness, Data Sonic’s Abu Hanifah Noordin broke down in tears as he explained the alleged RM6 million backhander he personally handed to Zahid, who stands accused of using the millions ‘donated’ to the ‘mosque building’ foundation on his personal expenses and to pay off his vast credit card bills.

Nordin has since stepped down as CEO of Data Sonic, but not before that plum ‘direct contract’ was handed out under the PH government according to the figures presented by Zairfrul. How strange, given the links to Zahid and the case about to come before the court:

So, under which ministry was the RM270 million contract handed out during the PH government? Of course, it was the Home Ministry, which is concerned with passports.

Meaning that it was Zahid’s successor who was responsible for the new Data Sonic contract, none other than his predecessor as Deputy UMNO leader under Najib, the PH double defector and present Prime Minister, Muhyiddin Yassin.

Indeed, after Transport and Defence, Muhyiddin’s Home Affairs Department issued the highest expenditure on untendered contracts during the PH government according to Zaifrul’s figures on the ‘101 contracts':

Muhyiddin over saw RM517.6 million in direct contracts under PH

So, does PN’s ‘PM8′ also find that like his fellow defector Zuraida he cannot remember approving these 8 meaty projects or is he willing to offer a full explanation as to why his department signed off a ‘negotiated’ secret contract with a known crony of the BN government who was already caught up in his predecessor’s corruption charges?

Zaifrul started the week as the hero of his party, moving the spotlight on corruption off their own decades of misrule and on to the previous elected government with a reform agenda, which they turfed from office.

Has it all backfired and created even more question marks over a coalition lead by charged and convicted crooks and headed by their former close friend and colleague who defected back to join them?