By Silencing The Media PN Exposes Itself

For two years Malaysia experienced what normal democratic countries treat as a basic right. Critics were allowed to complain about the government and the media experienced freedom to cover stories and publish the facts not just government propaganda.

It seems that the new PN coalition, now down to a majority of zero and with a newly appointed speaker whose legitimacy has quite rightly been questioned before the courts, wants to return the situation to the ‘good old days’ when the corruption of the ruling parties and personalities in power was kept private.

The reason is glaringly obvious. These PN politicians are dominated by the old BN guard who were turfed out by voters because they finally got found out. This was thanks largely to the internet, which brought international news and information to previously misinformed Malaysians.

The PN government has plenty it wants kept undiscussed. It lacks legitimacy (it is the opposite to what the majority voted for) and, worse, just about everything it has done since wresting power from the victors of GE14 has entailed illegal abuses, bribery and graft – a super-charged return to Malaysia’s so-called ‘money politics’ by a bunch of rivalling desperadoes.

Despite all this corruption and abuse and the use of Covid to crackdown on and intimidate the population, it is notable that this bunch of political crooks have not been able to secure the strong majority they had conspired to buy once the deceptive ‘PM8′ seized office (he has been recorded blatantly bragging about their illegal strategies). 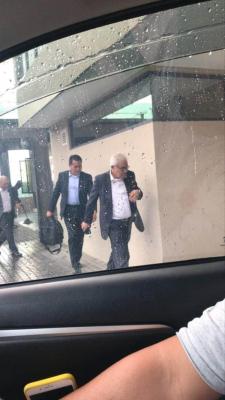 Plenty To Cover Up

Yes, tragically, the indigenous opposition MPs from Sarawak have proven easy enough to entice into betraying all their voters with the cheap trinkets of office.

And the ex-UMNO operator Hamzah Zainudin (presently attached to Bersatu) is plainly still hoping to purchase more Sabah MPs in the same way as PN relentlessly targets the elected Warisan state government (he has been visiting once more this week doubtless with enhanced offers in his briefcase).

However, in the main the elected parties who won GE14 have proven resistant to the old-style political bribery that had sustained UMNO/BN for decades.

It has meant that the coup masters have been all the more reliant on bully boy tactics and silencing of the media to attempt to keep control and protect their illegal activities from rightful criticism.

Today’s astonishing attack on the Astra TV station over the airing of a documentary SIX YEARS AGO represents the quintessence of what is going on. The so-called Multi-media ministry, which was hugely relaxed by the former PH administration, has re-emerged as one of the government’s most aggressive abusers of freedom of expression, including lodging a fine against the TV station for airing an Al Jazeera documentary about the murder of Altantuya.

It followed equally grotesque harassment of local Al Jazeera journalists, who had had nothing to do with the Australian made documentary, yet have been threatened with charges of ‘sedition’ and ‘defamation’ – laws that lay unused against journalists during the Harapan period and which were due to be withdrawn.

The excuse for the ludicrously outdated prosecution and punishment is a ridiculous abuse of a restrictive and outdated law that seeks to demand that film makers gain a licence before recording in Malaysia (a country crawling with mobile phones with video apps).

Even though Astra never made the movie, the company is being punished because apparently Al Jazeera didn’t do so for the award winning documentary (which can also of course be viewed via the internet by anyone who chooses).

There are two obvious reasons for the belated, unwarranted and vindictive move. The first is to intimidate anyone who enables the publication of anything that embarrasses or shows up this deeply flawed, unelected and corrupted coup administration – for the same reason that the owners of Malaysiakini have been hauled before the courts and faced with outrageously exaggerated charges that carry years of potential jail time on tendentious grounds for things a reader wrote in a comment.

The second reason is that the film throws an unflattering light on the role of former PM Najib Razak and his family with regard to the deeply suspicious trial and subsequent cover-ups over the murder of his translator Altantuya Shaariibuu, who had been threatening to reveal details about the hundreds of millions of euros in kickbacks received from the French Scorpene submarine deal.

Najib may be facing trial over a slew of similar gross corruption charges, mainly related to 1MDB, but with their majority presently of zero this PN government will not be racing to get to the bottom of this shady murder case that has resulted in so much proven obstruction by Najib and his allies.

Likewise, in court today, the translator’s long-suffering family from Mongolia were once more rebuffed by Malaysia’s judicial system after asking for copies of the police records and interviews on the case that might at last got to the bottom of what went on in this blatant judicial cover-up … and why.

PN simply cannot afford a situation where a single MP goes behind bars and out of action. With this government cover-ups need to remain covered-up – and the media and social media needs to be shut up.

Despite the silence all can see it.