An Attorney General, appointed by a yet to be legitimised prime minister who has unconstitutionally refused to call Parliament to test his bogus majority, has now started signing off pardons for the whole crew of crooks booted out from the last BN government.

Sabah’s Musa Aman today claimed that his ‘innocence’ of 46 charges for receiving massive timber kickbacks and money laundering was “indisputable” – even thought the Swiss are still prosecuting the bank UBS for money laundering those self same kickbacks. In fact, as everybody knows, his acquittal was a political move and there is a queue jostling up behind him comprised of numerous members of the illegitimate junta propping up the puppet ‘PM8″.

The handing out of a DNAA (discharge not amounting to acquittal) by prosecutors was also the method used to free Najib’s son Riza and it is clearly going to be the crooked path by which the entire band of criminals, whom the PH traitors ‘PM8′ and Azmin Ali have used to hijack the ship of state, plan to escape their charges.

In the case of Sabah, the strategy is widely considered to be part of a planned pincer movement against the Warisan state government, who have stood solid with the majority parties against PN. This first step has been to cancel charges against these criminal former leaders and the next will be to harass Warisan with ‘investigations’ by the police and MACC…. unless they care to join the coup as well.

Other MPs have already succumbed to this same tactic and PN are desperate for a major block to swap sides to shore up a non-existent majority which they dare not test in parliament. Expect these desperadoes to move swiftly, as their time is running out.

The question citizens must ask themselves is how could Malaysia have ended in such a pass, with the decision of the electorate overturned by a coup driven by the wealth and connections of a class of kleptocrats?  How could all due process have been so easily undermined by a rag tag bunch of hungry hyenas spoiling for abuse of office? 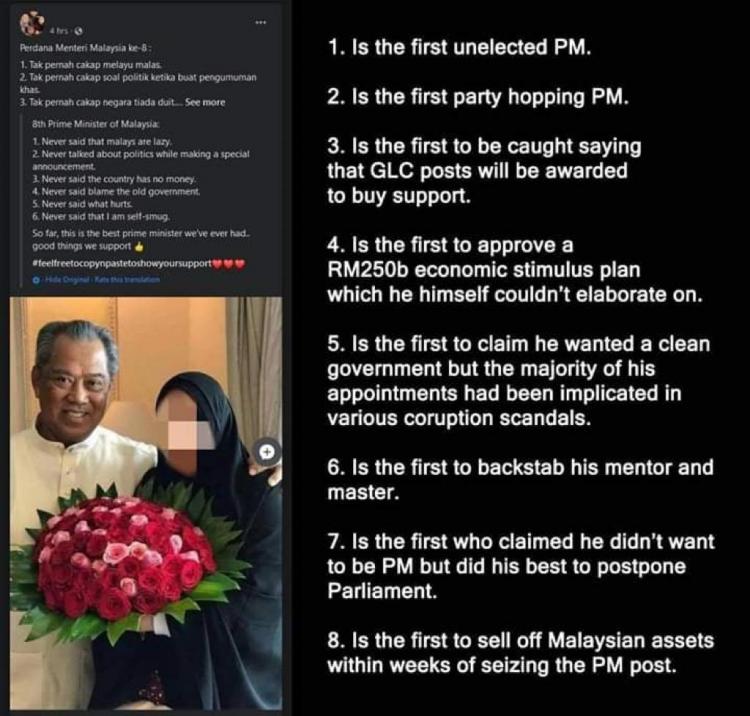 Summed up on social media

No legitimacy to act

The ‘PM8′ cabal has yet to obtain the authority to act as a government. Yet, here they are announcing vast borrowing and mysterious ‘stimulus’ payments, handing themselves emergency powers, appointing their political cronies to endless top-ranking management posts and now letting themselves off the hook – meanwhile, telling everyone else to stop ‘politicking’ during a health crisis.

Malaysia has been captured by a gang of criminals set not only on exonerating themselves for their crimes but on abusing the apparatus of state to bully, bribe and blackmail MPs to join their coup and to intimidate critics.

NGOs who have called out the abuse of process are also being targeted by the police and the MACC – tomorrow it is the head of the anti-corruption group C4 who will be dragged in for ‘questioning’ over doing their job and pointing out corruption.

Back in 2012 Sarawak Report detailed in numerous articles the corrupt timber kickbacks enjoyed by Musa Aman, based on solid documentation received from sources who also supplied the MACC investigators and Swiss prosecutors against UBS.

Eight years on Musa Aman has never sought to deny those articles and the case against UBS for money laundering his millions remains open in the Swiss courts.

Sabah’s fabled forests have been largely destroyed thanks to Musa’s rapacious greed and countless native folk have suffered the destruction of their lands for which, of course, they received none of the profit.

This man has swapped his Hawaiian shirts and flash ways for an Ulama look and now piously turns his eyes to heaven and weeps innocence. Malaysia must move fast against these hypocritical and desperate kleptocrats before their formula of Cash is King wipes out law and order for any foreseeable future.

And, to blame is a man who cannot even admit that he is extremely ill and unfit to lead: who is prepared to be a puppet to these rogues just so he can call himself prime minister.

Malaysians are entitled to proper transparency about the health condition of the man who suddenly and shockingly emerged as the chosen candidate to lead the country, because at the moment no one is telling the truth about what is going on.

What is apparent is that on Friday 22nd May ‘PM8′ announced he had met with a Covid infected individual and would undergo ‘quarantine’, self-isolating at his home for 14 days.

Yet Sarawak Report has been informed by reliable sources that just four days later on Tuesday 26th May he broke that home quarantine, travelling by private jet to Singapore, where he remained overnight to receive chemotherapy treatment for the resurgence of his pancreatic cancer.

The next day, Thursday 28th, ‘PM8′ released pictures of himself back at his home ‘working at his desk’.  The press release neglected to mention that ‘PM8′ needed to in fact spend a week of intensive rest following the treatment. Nor did it mention the fact that several cycles of increasingly exhausting treatment lie ahead of him which will involve similar infusions of powerful chemicals followed by mandatory rest over several months.

Pancreatic cancer is a virulent disease. ‘PM8′ has fortunately far outlived most sufferers already. However, unfortunately, it is evident he is now battling an all too common resurgence of this most aggressive form of cancer.

Malaysia is entitled to a full disclosure of the true medical condition of the man who suddenly, surprisingly and shockingly emerged as the non-candidate put in charge of supposedly running the country, whilst the criminals behind him have run riot, letting themselves off the hook and helping themselves to jobs.

Better still, Parliament should be recalled and the real majority representation of the people should be revealed.