What do the doctors for President Trump and Prime Minister Muhyiddin have in common? It is that they are both apparently willing to admit they are ready to sign off pre-prepared medical testimonials with political undertones on behalf of their patients.

Trump’s doctor has recently acknowledged that an unscientific and exaggerated report on the President’s health which he signed off when Trump took office was in fact dictated to him by Trump.

And today two separate teams of doctors employed by Muhyiddin in KL, one from the Pantai Hospital and one from the Ampi Chest and Medical Clinic Sdn Bhd, have been presented as having signed off two identical three paragraph letters ending with a thundering attack on the media who have expressed concern over the health of ‘PM8′, a pancreatic cancer patient:

“We are of the opinion that YAB Tan Sri Muhyiddin Yassin is fit to serve the people and the nation. As medical professionals we are appalled at the false reporting that has no basis”

The two identical letters even contained an identical spelling mistake for their patient, the ‘PM8’s, own name!

Therefore, either by a remarkable coincidence that cannot be explained by science these doctors and their teams separately gave identical professional assessments of their patient and came up with totally identical letters (unscientifically dotted with attacks on the media) or this letter was composed by somebody else working for their private client ‘PM8′ and they just agreed to sign it.

Chest specialist, Dr Ampikaipaker is known to be a very close friend of Muhyiddin, who attends
Deepavali and New Year’s Eve at his house

Even more remarkable is that according to these letters and common knowledge these KL doctors are not the ones primarily treating ‘PM8′ for his pancreatic cancer. The doctors at the Pantai and the Ampi both refer in their identical accounts to third party ‘experts in pancreatic cancer’ who have according to the letter said that Muhyiddin is clear of cancer, making plain that they themselves are not the experts being referred to:

“Experts in pancreatic cancer have conducted detailed investigations and have confirmed that there is no evidence of cancer currently ….” 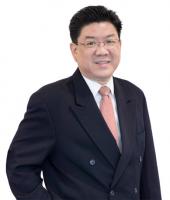 After all, Dr Ampikaipakan, who is known to be a close personal friend of Muhyiddin, is a specialist in respiratory medicine and the diagnosis of lung cancer.

Dr Lam Kai Seng is a specialist in head and neck cancer and other cancer conditions, but he does not list any specialism in the highly challenging and specialised field of pancreatic cancer amongst his fields.

The doctors treating Muhyiddin for his pancreatic cancer are in fact based, as the letter acknowledges, at the Gleneagles Hospital in Singapore.

So, if the ‘PM8′ is now willing at last to provide a proper account of his health situation to the deserving public, why has he not gone to the doctors who are actually responsible for treating him for this testimonial and why is he having these accounts dictated by his own officials rather than generated by the doctors themselves? 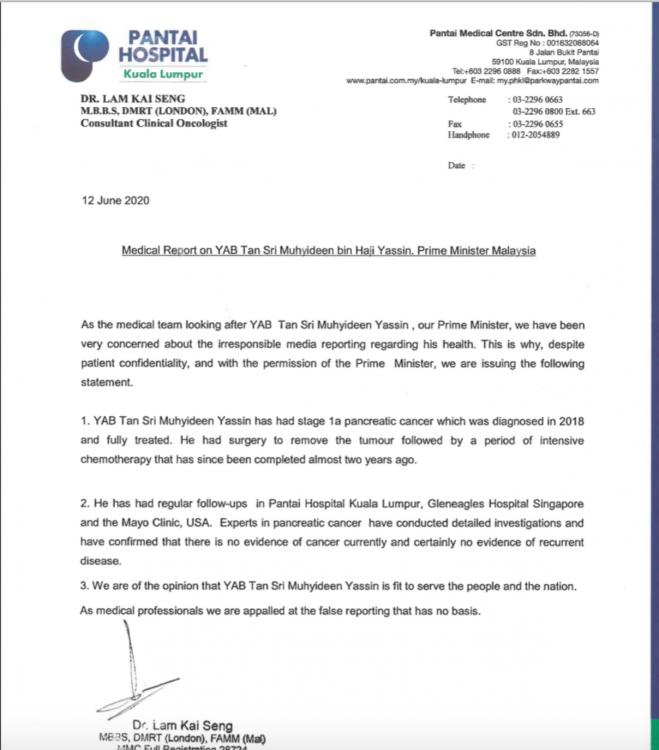 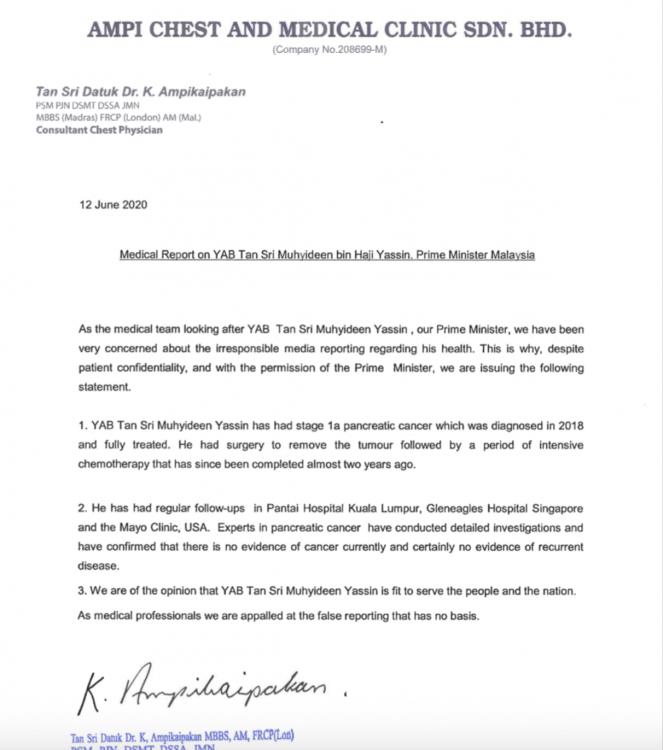 Sarawak Report is gratified that its reporting on this matter – the ‘elephant in the room’ with regard to this as yet unconfirmed premiership over which much of the local media appears to have been intimidated – has finally provoked this administration into addressing the situation with the public.

This is not a “scurrilous distraction” or “sinister lies” as the press release issued today by the prime minister’s office seeks to allege (focusing as it does on whether or not the treatment broke his self-imposed quarantine for Covid with a flight to Singapore) it is a matter of major public interest.

A man has taken office about whom there are major health concerns following an operation for pancreatic cancer and the public has a right to as many details as possible on the situation with due respect to his personal privacy.

This is particularly the case as he was appointed despite never having run for this office nor headed a political party nor been even considered as a potential candidate named by any of the MPs who originally voice their preferences to the Agong.

Whilst the less government interference the better may have proved beneficial in the Covid crisis, which was mainly left to Malaysia’s professional medical establishment to handle, in other matters the public need to know how capable their leader is to handle the stresses of office and if in fact there are undisclosed others making key decisions instead of him.

It is the duty of the media to raise and challenge such issues and thanks to Sarawak Report we have at last for the first time seen a statement on the prime minister’s health indicating a further willingness on the part of himself and his officials to engage on this matter of major public interest. This is progress and Sarawak Report takes credit for encouraging a more democratic transparency on this matter.

On the other hand, given the strange nature of these doctor’s testimonials, it is to be feared that the Muhyiddin statement raises considerably more questions than it answers.

Sarawak Report politely requests as a first step that the prime ministerial office obtains a further testimonial from the horse’s mouth about this matter, namely the pancreatic cancer specialists at Gleneagles Hospital in Singapore, who have actually been managing his treatment. The testimonial ought to be written by them and not dictated for them to sign.

There seems a likelihood that the primary purpose of the press statement on this matter is to seek to target Sarawak Report for raising this issue in the first place and to discredit the highly valid concerns about the health of the sitting prime minister. Today’s press release focuses on the date of the ‘PM8′ trip to Singapore and Sarawak Report’s observation made in an article last week that he may have broken a Covid quarantine to undertake it.

Sarawak Report has more than one credible source that ‘PM8′ has been receiving chemotherapy and has visited Singapore recently to undergo it.  We are willing to concede the exact date we gave in a previous article may have been inexact and therefore not coincided with the period ‘PM8′ declared himself to be self-isolating owing to meeting with  a Covid sufferer.

These are minor points, resulting from lack of official transparency on this matter up till now, compared to the central issue of his health.

If the specialists at Gleneagles Hospital are willing to provide a similar ‘all clear’ for the prime minister designate, written in their own words, then Sarawak Report would be more than happy to concede that its two credible sources close to the medical circles involved have been mistaken and that ‘PM8′ happens presently to be one of the few lucky long-term survivors of this disease.

In any case, the big job has been done. The matter of the prime minister’s state of health is now out in the open and a topic of discussion, as it should be.

On the other hand, the deadly nature of pancreatic cancer is its tendency to return suddenly, rapidly and aggressively at any time. Doctors do not state patients to be “fully clear” as some media are now reporting are as a result of the PM’s press release unless there has been no recurrence after five years. Muhyiddin’s surgery was in 2018.

Therefore, ‘PM8’s doctors should continue to be encouraged to provide the public with ongoing updates in a proper and transparent fashion.

And this government should cease threatening journalists who seek to raise this pressing matter of rightful public concern.

See the press release by the PMs Office: 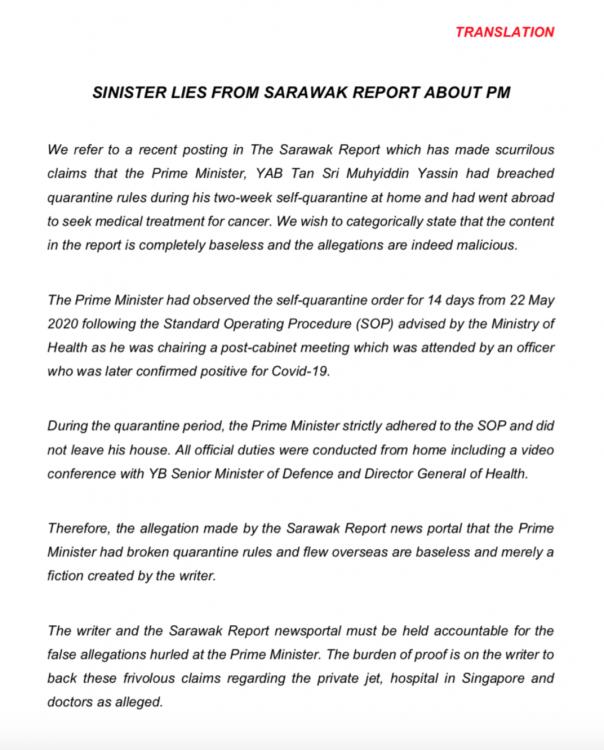 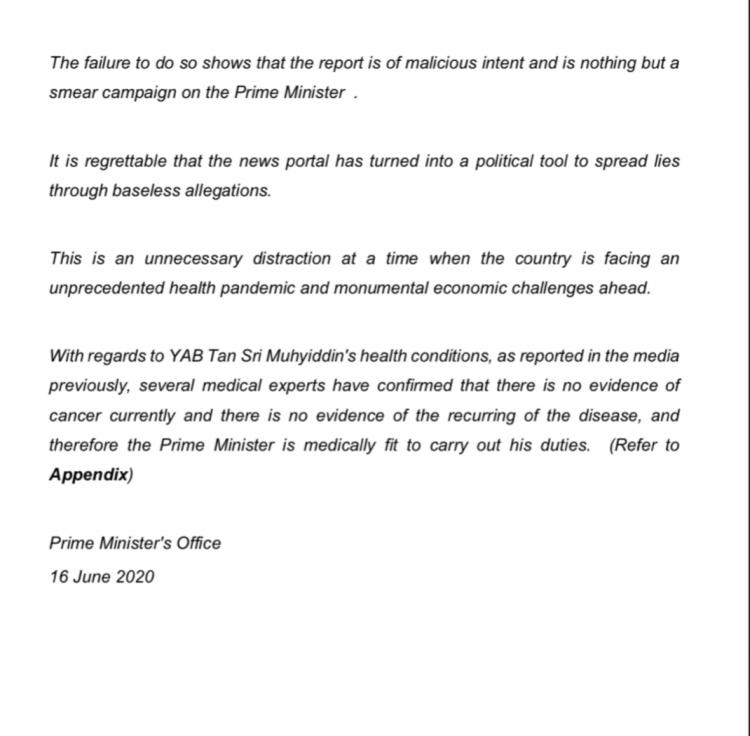