According to multiple sources and evidence viewed by Sarawak Report, the former PKR Sarawak head, Baru Bian, and his remaining supporters within the party are set to join PSB, a party that is funded by Sarawak’s wealthy timber families and regarded as a vehicle for the Governor Taib Mahmud’s attempts to take back more active control of the state.

It is a development that many of Baru’s national and international supporters will view as a shocking betrayal, given his former dedication to native land rights and condemnation of rampant logging and plantations conducted by Taib and the crony timber companies behind PSB.

Baru Bian has informed close colleagues that his plan is to keep the matter secret for now and to announce the defection when the state assembly (DUN) sits in April. He would thereby present a fait accompli towards his former party, which had been seeking to minimise the damage caused by the Azmin Ali defection from PKR and to invite initial waverers (including Baru Bian) to return to the fold.

Baru’s two rebel colleagues Ali Biju and Willie Mongan, have both taken up Azmin’s offer to join the as yet to be legitimised PN coup coalition government as ministers.  However, Baru himself stepped back from the brink when the extent of the defection became clear – Azmin’s coalition has ditched support for their former leader Mahathir and now props up the return of an UMNO led coalition, together with PAS and Muhyiddin as the puppet ‘PM8′.

Baru has plainly recoiled from association with the criminal elements of UMNO and the Malay/Muslim supremacist agenda of the coup coalition. However, he is not prepared to reconcile with his former party or the new leadership that has been put in place locally in Sarawak, after remaining loyalists voted in Larry Sng as a controversial replacement. 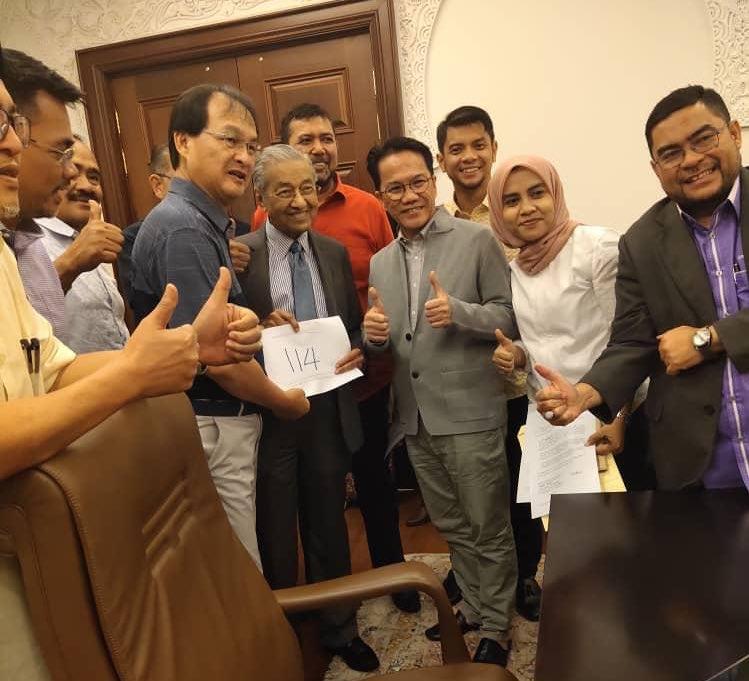 Wavering – Baru Bian returned to support Mahathir as PM (completing a majority list of MPs) after initially defecting with Azmin Ali. However, he has resisted a return to PKR and has been recovering from emergency heart treatment he received soon after

Larry Sng has indicated to that he would be willing to work with Baru should he return to PKR.  However, it is clear that the wealthy entity that is PSB has seen its chance to pick off a batch of the opposition’s better known figures.

Concerned informants within Sarawak’s GPS component parties have alerted Sarawak Report that the party is being designed by Taib’s economically powerful allies to undermine the new leadership of the state government currently lead by Abang Johari, who succeeded the late Adenan Satem, a popular successor to Taib as chief minister.

PSB intends to take seats from the GPS component parties, whilst posing as an independent force to attract opposition votes. In this way Taib and his business cronies plan to keep control of the political management of the state after the next state election, by acting as king makers or even the dominant party.  Such a commanding position would ensure that no action is taken against corrupt practices in which they have been involved and allow them to continue to plunder the state’s resources unfettered.

The stakes are therefore high and it has been made plain to those who are presently being wooed to join PSB that there will be unlimited funds available to reward key members of the party and to splash on voters likewise. For would-be defectors from cash-challenged PKR this is perhaps a tempting prospect.

The leader of PSB, Wong Soon Koh, is a former SUPP defector, as is his Senior Vice President, none other than Tiong Thai King, the politician younger brother of Tiong Hiew King head of the global timber giant Rimbunan Hijau.

Tiong has announced he will represent PSB as the candidate for his current seat of Dudong in the upcoming state elections, making it the sixth state seat presently controlled by supporters of the party. Information gained by Sarawak Report indicates the party ultimately aspires to win no less than 20 of the 82 seats in the assembly.

The money behind PSB is from Rimbunan Hijau and also KTS, according to sources (or indeed any of Taib’s business cronies he cares to call upon) which therefore means funds will be unlimited and the party can easily afford to hold such aspirations.

It is doubtless for that reason that Baru Bian has been somewhat excitedly telling his planned fellow defectors that PSB will make a “formidable force” against GPS and could perhaps take over the state. There is also talk of using the ‘independent’ stance of PSB to set up a viable alliance with DAP and even PKR to take control of the state (meaning these former opposition parties would then also be tied into a Taib supporting phalanx).

How the remaining PBB and Dayak parties within GPS, who thus face being eviscerated by this front organisation for Taib and his timber cronies, will react to all these plans is not yet clear. What is evident is that if they allow PSB to pose as independent and to assume Baru Bian’s mantle as the former champion of Dayak land rights many of these established loyalists will lose their seats.

The crowning irony of this turn of events is that Baru Bian, who once posed as the hero of dispossessed Dayak communities (and accepted charitably sourced funding to support several cases as the lawyer on their behalf) will have gravitated to become the tool of the very businesses behind the oppression he once fought and the environmental devastation he once publicly lamented.

The information emerging about these planned developments has meanwhile clearly provoked PKR Sarawak into moves of its own over the past few hours, with senior party members having issued a list of names they want expelled.

The new party leader, Larry Sng, today told Radio Nyawa Sarawak that the challenges towards 12 PKR leaders named in a statement yesterday by MPP (Central Leadership Council) member, Joshua Jabeng were provoked by evidence of defiance and disaffection from the party garnered from social media and other public statements and actions by the individuals concerned.

Some have even altered their Facebook identities to promote their sympathy for the new ruling PN coalition, Sng told the radio station in an exclusive interview, meaning it has to be assumed they have disassociated from the party. Meanwhile, one of those named gave his response – Simon Siah told the radio station that he was in shock at being identified as a rebel and decried any such ‘politicking’ at a time of national crisis:

“We are all shock with the statement by Joshua Jabeng. As we do not know what are the complaints about against us. We are yet to receive a show cause letter from central committee, then we will reply accordingly. It looks like the new committee under the leadership of Larry Sng does not see the right place and time to come out with such a statement. Malaysians are currently concerned about Covid 19 spreading in our country, yet they still having time for politics” [translated summary]

Siah explained. In response, Sng told Sarawak Report the party will follow procedures on the matter and is open to appeals for those genuinely committed to the party, including his, against any unfair denunciations by others.

Nonetheless, communications viewed by Sarawak Report make clear that in fact the politicking has continued to be played out on several sides on this matter and one major source of concern for PKR is extensive evidence that Baru Bian and certain of his allies have been organising their defection behind the scenes, whilst planning to leave sympathisers in place to retain intelligence and undermine the party.

As it rebuilds its structures PKR’s remaining leadership say they want to be certain about who is friend and who is foe. GPS is doubtless feeling the same heat, as well as DAP. Because, aside from all this squabbling, it is clear a much larger game is unfolding in Sarawak.

Large sums are now being promised to be deployed in order to reconfigure Sarawak’s entire political landscape at the next election. Baru and any others seduced by PSB will be merely pawns in a subtle move to bind the political establishment firmly back under the thumb of the Taib family’s political and business empire under the guise of an ‘independent’ party.