What sort of a Banana Republic hands out major road contracts to a company owned by family of the Minister of Public Works and of the Deputy Chief Minister of the State?

Sarawak, Malaysia, of course, and this week a bridge constructed by the crony contractor KACC that received a so-called ‘negotiated’ contract on the Borneo Highway collapsed.

Back in 2012 Sarawak Report had protested the handing of yet another bridge contract to the same crony company, predicting that gifting engineering contracts to the unqualified relatives of ministers posed a public safety hazard beyond mere corrupted practice.

Sadly, it seems we have been proven only too right in that prediction.

The people of Sarawak can heave a sigh of relief that the structure did not even survive the early construction stage before caving in. Imagine if it had fallen in once the road was filled with traffic, threatening road users with horrific consequences?

Corruption kills, it impoverishes entire countries and Malaysians voted for PH to get it dealt with. Yet in Sarawak we have just seen the same Najib crony behind this family enterprise let off with a light slap of the wrist for another phenomenally corrupt activity as  MOI’s ‘Bag Carrier In Chief’ for tens of millions of ringgit of stolen 1MDB cash.

Bustari Yusof was allowed off prosecution for conniving with Najib to pour over a hundred million ringgit into the purchase of the last state election in return for paying a gentle fine of RM3.6 million.

He is also the brother of the former BN public works minister Fadillah Yusof, who of course granted this chunk of the Pan Borneo highway project to KACC construction owned by Bustari’s offspring – together with a nice chunk of shares owned by the offspring of former Deputy Chief Mininster, Alfred Jabu. 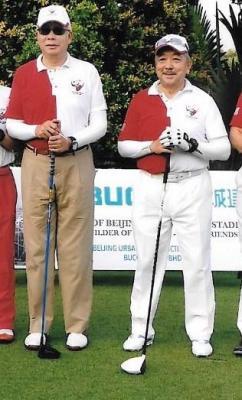 Sarawak Report has written about the cosy road and bridge contracts handed to KACC construction before.

In this latest case a chunk of the Pan Borneo Highway outside of Miri was handed to a joint venture named Konsortium KPE Sdn Bhd, led by KACC Sdn Bhd and Perbena Emas Sdn Bhd – it was described as the third non-public listed entity awarded a work package by the Ministry of Public Works in 2016.

Its qualification for such an honour? None. Thanks uncle Fadillah, Minister of Public Works and the benevolent golfing companion of Daddy, Najib Razak (for whom Bustari was a vital confidante and bag carrier for stolen 1MDB cash).

As Sarawak Report wrote several years ago, the Bustari and Jabu relatives who act as shareholders and directors of KACC are not qualified to take on such work, in fact they are in the business of sub-contracting it would seem, creaming off tens of millions of public money in the process.

Back in that article written in 2012 Sarawak Report specifically questioned not only the corruption but the safety concerns about hiring this team of crony hangers on to build a bridge on a public highway for a RM215 million contract – it seems those concerns were prescient and now the predictable has happened:

“Are any of these characters qualified to build a bridge? 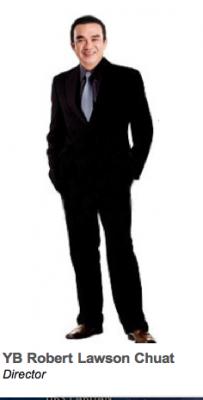 The answer is no.
Robert Lawson Chuat [Jabu cousin] boasts a UK Diploma in Business Studies (roughly equivalent to an A Level), Mohd Abdul Ghani [brother of State Secretary] has a degree in Ecology and Mohd Bustari has a degree in Arts and Commerce.
What all these young men have in common is family ties with BN bigwigs.

Sarawak Report has now established that the well-connected Directors of KACC Construction Sdn Bhd are currently looking for a genuine contractor  that can carry out the work!

RM30 million profit!
Our information is that the snappy dressers from KACC Construction Sdn Bhd have made known that they are looking for a sub-contractor will to take on the project for RM184million!
That means they are expecting to receive a fat profit of RM30 million for doing absolutely nothing at all!

There are two explanations for this disgraceful situation.

Either this company is planning to take RM30 million of public money by inflating the budget, in which case we have yet another example of serious corruption involving not only these young men, but their politically powerful relatives, who are clearly behind the decision to hand them the project. 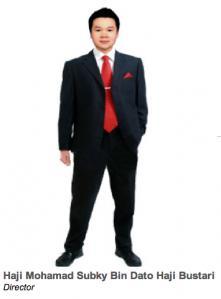 I may not be up to much, but Bustari is my Dad.

Or, even more chillingly, KACC Construction is planning to deprive its sub-contractor of sufficient funds to build the bridge safely and properly.

After all, If RM30 million is to be taken out of the budget for the project where are the savings to be made?  On materials? in construction methods?  In salaries?  In time taken?

Are the people of Sarawak to be forced into paying top dollar for a cut price, corner-cutting project?

The present Minister for Public Works, PKR’s Baru Bian has announced he will issue a full inquiry into what went wrong with this bridge. It should start with an enquiry into how and why this company, which is also still owned by Jennifer Jabu (daughter of the former Deputy Chief Minister) and variuos Bustari Yusof children, received yet another mega-bridge building contract for which they were not qualified: 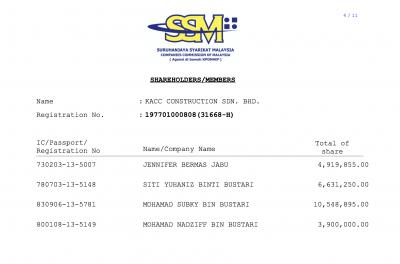 A second question is why two years into the new government such companies still hold contracts for the Borneo Highway?  And the final question is when is a full commission going to be launched to conduct a thorough review into all contracts and concessions handed out in Sarawak by the corrupted Taib regime?

The profits and assets of all the beneficiaries of these gross thefts should be seized and prosecutions undertaken where appropriate. Meanwhile, the said concessions should be frozen.