"If It's Not A Profitable Business You Pack Up And You Leave!" Papuans Tell Sarawak Loggers

Billions of dollars have been extracted in timber from Sarawak (also Sabah) with zero offered to native people in return despite lasting environmental destruction and their loss of livelihood.

Why? Because the companies concerned acted hand in glove with local politicians, thuggishly pushed aside the landowners and pretended to operate at a loss.

Now Sarawak Report has identified the very same tragic problems have beset Papua New Guinea and perhaps that should come as little surprise, because the very same handful of family-linked companies (now the biggest timber companies in the world) are responsible for logging there also.

Our Investigation Into Sarawak’s Heart of Darkness

These companies and the scale to which their evil and pernicious influence has spread eco-disaster and human misery across the globe are now the subject of an on-going investigation by Sarawak Report.

They, together with their benefactor Taib Mahmud, have set up a worldwide web of worst practice with timber operations that represent a deadly threat to all the remaining forests on our planet.

These companies have used big money and bribery to spearhead their destructive resource-grabs from South East Asia, to Africa, America, Australasia and beyond.  They stand at the heart of the present climate crisis and based on the money they made from Sarawak and then Papuan timber (also from the Solomon Islands and other victims) they have now developed into powerful global conglomerates, still to this day protected by Taib Mahmud and the rogue jurisdiction of Sarawak from taxation and accountability.

Time To Act – Put Out The Fires And Stop the Logging

All this misery and disaster is to the benefit of just a few dangerous and greedy Sibu thug businessmen, their cronies and hangers on. Change must come and it is already on the way.

When Sarawak Report visited Papua New Guinea last month a new political leadership had just taken over under Prime Minister James Marape, following the ousting of Peter O’Neill. Like Malaysia’s new government it is based on an anti-corruption agenda.

The new government wants reform after years of rampant logging, which have brought virtually nothing in the way of infrastructure development or benefits to the local Papuan people, who (like the Dayak of Sarawak) have been stripped of their jungles and their way of life in return for an offer of slave wages on oil palm plantations.

Campaigners who have followed the situation for years, for example the former chairman of the Forestry Board and long term environmental and human rights advocate Kenn Mondiai, are now calling for a full audit of the financial and compliance records of these companies.  They are asking how come after 40 years of failing to declare profits companies like Sibu-based Rimbunan Hijau have continued to tear down the rainforest and then invest in a string of private enterprises that have achieved a virtual state capture of Papua New Guinea.

See Kenn Mondiai comment  “It is high level corruption. The [Malaysian] loggers and politicians are in bed, they are partners in crime”.

Key related questions are why do these Sarawak companies control 90% of all the logging in PNG’s vast forests (it is the second largest island on the planet and was entirely forested); why were these companies allowed to operate at a loss and how come despite these ‘losses’ the biggest company Rimbunan Hijau now owns 30% of the real estate in the capital Port Moresby along with a string of key business in the state from retail to banking to shipping to newspapers to aviation?

Meanwhile, campaigners say local folk have seen none of the promised roads, schools, hospitals and other benefits specified in the terms and conditions demanded in return for logging permits up and down the country.  Areas meant to be selectively logged have been clear-felled and replaced by oil palm plantations, where workers are being paid a fraction of the legal minimum wage by the ‘Malaysian’ incomers who now control their lands.

It is a situation remarkably familiar for anyone who has watched the destruction of Sarawak over the past decades.  It is based on the bribery of local decision-makers – civil servants and politicians – by logging operators already made flush with cash thanks to their previous tax-free crony operations in Sarawak.

As Sarawak Report confirmed travelling to communities on the ground, Malaysians in general have gained a bad name in this country thanks to the greedy, rapacious antics of these Sibu mafia family outfits and most Papuans want them gone (and preferably severely punished also).

Time and again we discovered examples of how native landowners were cheated and betrayed by agents and local politicians in the direct pay of the shadowy operators acting for Sarawakian, Taib-linked timber mafia families.

And worse, as Sarawak Report will go on to demonstrate, Papua New Guinea forms just part of a global web of timber destruction carried out by these timber mafia families, who have benefitted for decades from the safe haven – away from scrutiny, accountability and the law – offered by the Taib regime in what has become Malaysia’s Heart of Darkness.

We began our shocking journey of investigation into the state capture of Papua New Guinea by these now global billion dollar companies by interviewing Kenn Mondiai about the terrible history of the past few years and how he hopes a better Malaysia can work with a better PNG to repair the damage.

He says the job must start with a full audit in PNG of Sarawak’s billion dollar timber barons and their companies.

CLICK HERE to see our recorded interview at the opening of our upcoming series of investigations into Sarawak’s global timber mafia. 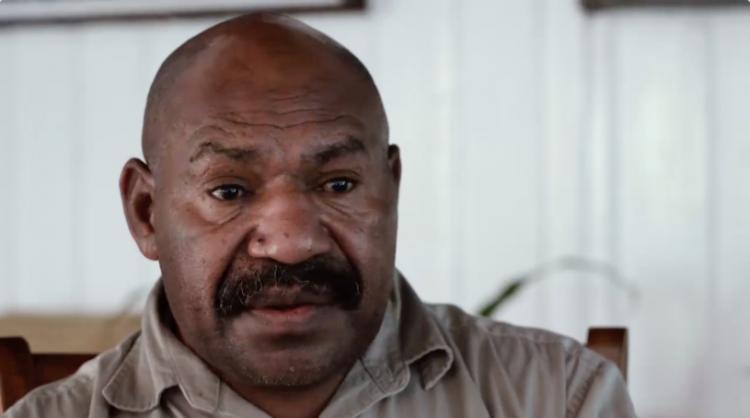 ABOUT: Kenn Mondiai worked for 6 years as a Forestry Officer in the logging industry before resigning in protest at the abuses he witnessed. He subsequently has worked for the European Union and WWF on developing sustainable eco-forestry projects and sustainable community development activities to benefit local communities.

For many years he faced intimidation and harassment having taken the Sarawak company Rimbunan Hijau to court over what was finally ruled to have been an illegal extension of a vast 300,000 hectare logging concession (Wawoi Guavi Block TRP) into an even more immense 900,000 area of the Kamula Doso FMA, which has now been rescued for conservation.  During the case, which lasted 8 years he received death threats and on one occasion drunken police officers shot bullets into a tree by his house, smashed beer bottles onto his walls and forced his wife at gunpoint to sign documents.

He is now a prominent supporter of the anti-corruption drive announced by the new PNG government of Prime Minister Hon. James Marape.