The announcement last week of the retirement of Governor Taib’s son-in-law, Syed Ahmad Alwee Alsree, from running the family dominated CMSB came as no surprise to some in the know, who have observed a certain family jostling for position over several months.

The two Taib sons apparently wanted control back from Alwee Alsree, married to sister Hanifah, who has now secured her position as an MP in the family domain of Mukah. Perhaps the multi-millionaire heiress was starting to look a little too ambitious for her siblings?

After all, if the forces of law and order were to scrutinise CMSB and its major Taib family shareholders regarding the company’s monopolies and favoured treatment over the years the business would be carved up overnight. 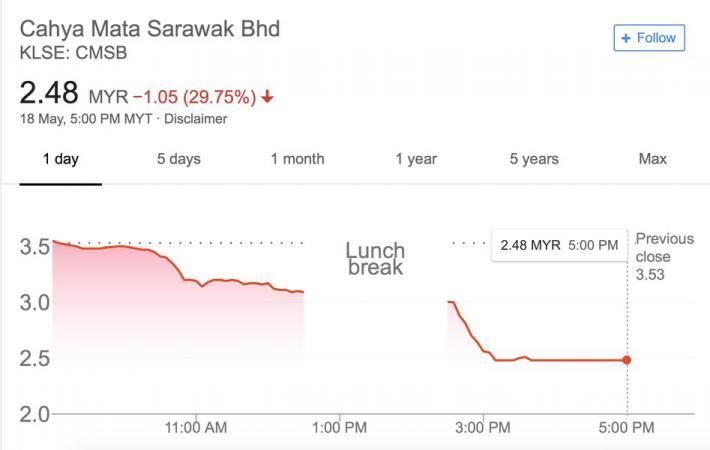 However, so far, politics have intervened to save Taib’s skin for another day. Sarawak did not hold local elections at the time of the federal elections like everywhere else, leaving the state government intact and that establishment (ever the catspaw of the powers-that-be in KL) quickly flipped its loyalties to the new coalition led by Taib’s old political ally Dr Mahathir.

At which point CMSB shareholders appeared to regain their nerve… or rater rallied not least thanks to some distinct share transactioning, which was not referred to in the recent announcement on Alsree’s departure but can be detected through the Bursa Malaysia obligatory announcements on share transfers concerning major shareholders.

One brother sells and another buys

What is plain to see is that whilst elder brother Abu Bekir Taib has been selling off his vast CMSB shareholding in a relentless series of scores of transactions since well before the election (a pattern that mirrors his divesting of a number of his other assets in an apparent attempt to reduce his proven wealth) younger brother Rahman Sulaiman has been buying up those shares to become the dominant figure in the company.

Rahman Sulaiman crashed out of business and politics in Malaysia a decade ago, but has been recently seen around Sarawak again and is rumoured to be aiming to take back control of CMSB.

Scores of transactions over the past eighteen months have registered sales by Abu Bekir being followed by purchases by Rahman Sulaiman, often with purchases by EPF apparently taking place between the two.

Abu Bekir started divesting his shares at the start of 2017, beginning with the disposal of some 700,000 shares (below) leaving him with still a major shareholder with a commanding 87,521,756 shares to play with as he remained Deputy Group Chairman of the company: 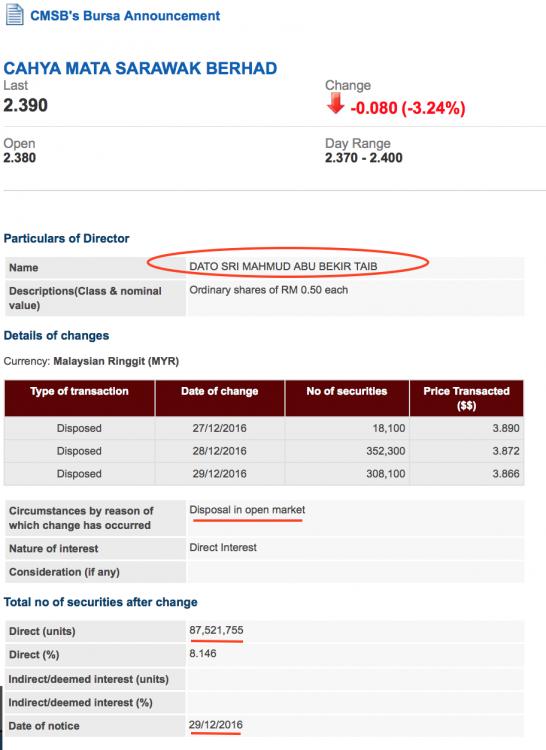 Start of a major exit

Confirming Abu Bekir’s commanding position as a top shareholder at that time the 2016 Annual Report recorded him owning 80 million shares directly and a further 12 million through RHB Bank, roughly the same number as his brother.

These shares, together with shares still in the name of their deceased mother (shares assumed to be controlled by the Governor) and a company owned by their sisters represented at least 47% of the company publicly in the hands of the family.

The only other shareholders to hold over 5% of the company in 2016 were the Employee Provident Fund (EPF) with some 90 million shares and the Taib family’s ever reliable partner in business, the Sarawak Economic Development Corporation (a state investment arm long controlled by the decisions of Taib and still chaired by Taib’s brother in law).

Altogether these 6 entities owned over 56% of the entire company. 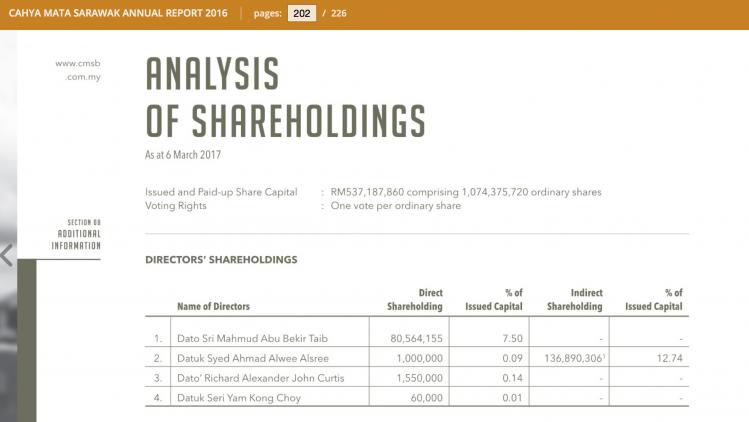 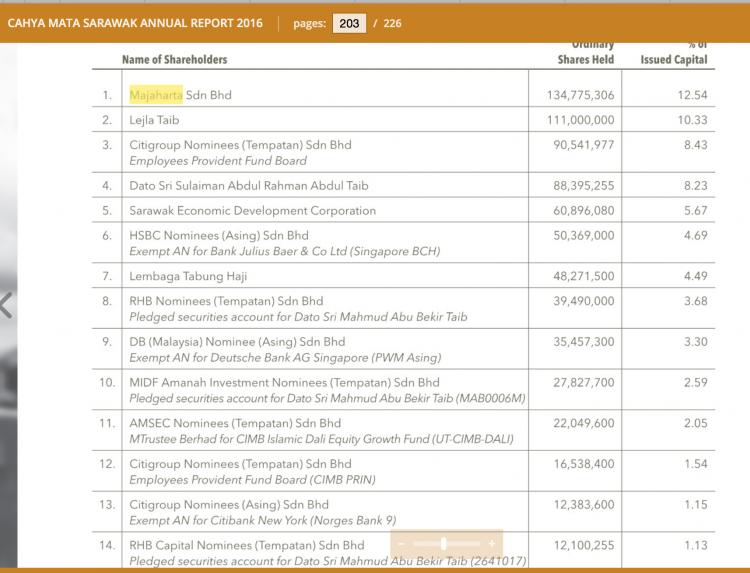 Over the following two years Abu Bekir’s sell off has relentlessly continued, with scores of transactions recorded. The result being that following the last recorded sale some two and a half years later on 1st July 2019 of 5,700,000 shares left Abu Bekir owning just a million direct shares in the company.

At a rough median price of RM3.00 per share that represents a divestment worth approximately a quarter of a billion ringgit by the Taib elder son in this particular family company: 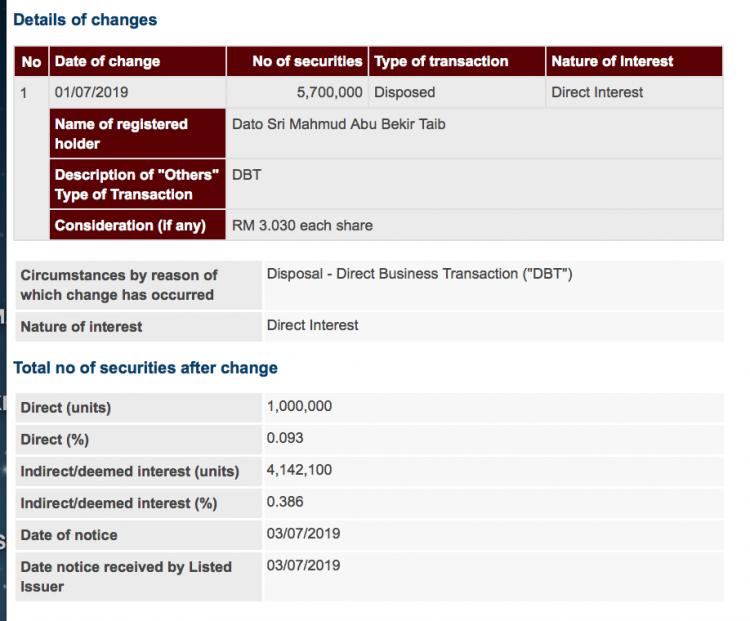 On the other hand younger brother Rahman Sulaiman has been accumulating shares. Following his most recent aquisition at the end of September of this year his shareholding had increased to just over a hundred million shares in the company.

Another consistent buyer has been EPF, which as of this month had increased its holding to over 123 million shares – up from 90 million before the election. The other major institutional investor since Abu Bekir started divesting his shares has been none other than the scandal torn pilgramage fund Tabung Haji, which has increased its holding from 48 million to 104 million over the period.

Such a show of faith in the Taib family firm by these government controlled funds will have been integral to the stabilising of the company following last year’s crash – share prices almost regained their pre-crash levels by the start of this year largely to these massive transactions, benefitting Abu Bekir handsomely as he offloaded those final shares.

Over the past months however, they have plummeted down once more from RM3.6 to RM2.3, so once again Taib fortunes seem to have been at the expense of ordinary folk – in this case pensioners and pilgrims have lost out yet again.