gIn order to avoid a proper accounting for billions of dollars of unaudited borrowings the state government of Sarawak has resorted to suing for defamation an elected representative who was merely doing his job.

Chong Chien Jen (YB for Bandar Kuching and MP for Stampin) has asked several times in the State Assembly for the details of expenditure by five state owned companies, which have borrowed billions of ringgit guaranteed and now funded by taxpayers.

The bonds were raised offshore at unusually high rates of interest, which is now producing a huge annual burden on the state finances.

RM1.4 billion was paid out of the annual budget in 2018 alone to service these accumulated debts and since the first of these bonds was taken out in 2006 Sarawak has had to find over RM18 billion (not counting this year).

The payments have all been quietly funnelled through the development budget, described as a so-called ‘Government Contribution to Approved Agencies Trust Fund’ (amounting to nearly a quarter of the average state budget) and Chong has rightly questioned first why these companies themselves are not servicing their own enormous borrowings and if not why the expenditure of these publicly owned and funded companies has not been properly and transparently audited?

These are exactly the sort of issues that elected representatives are supposed to raise in a parliamentary assembly, where by long established legal tradition parliamentarians are allowed to say anything they like without being dragged into court. The DUN broke that tradition and furthermore has sought to sue the Kuching DAP member on grounds of  ‘defamation’, something that it is also firmly established a public body cannot do.

However, Najib’s federal judges favoured the state government with a ruling that overturned the principle leaving Chong to fight a defamation case for rightfully asking where billions of ringgit of taxpayers’ cash is being spent?

The parallels with the equally under-audited 1MDB do not stop there.  The very bank which has seen 17 senior employees and former employees charged by the Malaysian authorities for alleged corrupt practice over 1MDB, namely Goldman Sachs, is also up to its eyeballs in these loans.

Sources in Sarawak have informed Sarawak Report they have reason to believe that the very same Tim Leissner, who has pleaded guilty to kickbacks and bribery of Najib and others over 1MDB, was also behind two of the five bonds questioned by Chong. This would appear entirely probable since Leissner was already the bank’s head of investment banking in Singapore and a rising star considered a key networker amongst decision-makers in the region.

The Sarawak bonds totalling US$1.6 billion were issued through Labuan in 2011 and 2012 and are likely to have been the deals that promoted him to South East Asia boss, given the fat fees of over $10 million dollars achieved by the bank on each of the deals.

Goldman was to charge even greater percentages for raising the 1MDB bonds, even so the bank apparently secured a 1.3%, fee for raising the first Equisar bond of $800 million in 2011 which was way above the .3% charged to Apple for example.  Just as strange and disadvantageous to Sarawak taxpayers was the unnecessarily high interest rate of 6.25%. This was how experts reported it at the time:

Goldman…. could certainly do far worse than the trade it privately completed just over a week ago for an investment company owned by the state of Sarawak in Malaysia. The sole books deal for Equisar must have turned rival Asia-based DCM originators and structurers green with envy.

Goldman’s fees on the US$800m three-tranche 15-year are rumoured to be anywhere from 1.25% to 1.75%. That’s a US$10m–$14m payday from one deal, the kind of wedge it might take a rival bond house more than two dozen standard G3 syndicated bonds to bring in – and there’s also the possibility of a juicy follow-on commission to be earned from Equisar…..

The deal carries an A– rating from Standard & Poor’s and yet pays a 6.25% coupon across all three tranches. That’s around 160bp more than Malaysia paid for 10-year US dollar funds in its sukuk offering a few weeks back, and 180bp more than where those bonds were trading last week….it’s difficult  to justify the 1%-odd premium Equisar appears to have paid for its 15-year funds given that its deal has the same credit rating as Malaysia’s. [Jonathan Rogers, IFR July 2011] 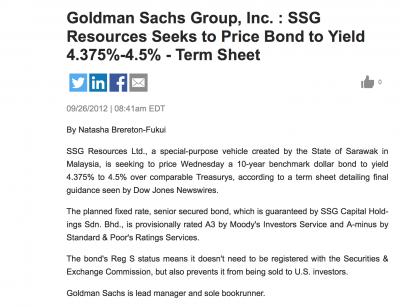 There have long since been concerns expressed that the high interest rates and disadvantagous terms of the bonds, combined with high payments to Goldman were pointers to potential misappropriations.

The secretive approach by the government in using an off-shore centre to raise the bonds through a subsidiary private company followed by years of refusal to publish accounts of where the public money has gone or who has held these debts rightly raises those concerns higher still.

The fact that it is now known that the very same player at Goldman Sachs who arranged these two bonds was simultaneously up to every kind of self-admitted crookery in the issuing of the 1MDB bonds for Taib’s political colleague Najib Razak in 2012-2013 surely demands action for a full enquiry, both by US and Malaysian regulators?

Meanwhile, Sarawak staggers under the burden of the debt repayments and Chong Chieng Jen has been left with the sole consolation that the outrageous civil suit against him may at least force levels of disclosure from the state government that it has so far refused to produce in the normal course of public accounting. 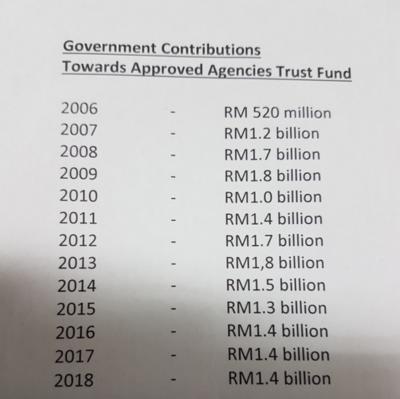 The advertised purposes of these loans have referred only broadly towards development goals and projects, most of which Sarawakians know have come to very little ten years on. 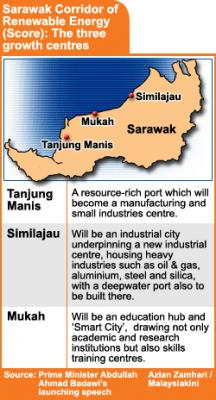 They include the ‘Tanjung Manis Halal Food Hub’, which appears to have mainly provided an excuse to log out and destroy remaining low land mangrove areas in a project headed up by Taib’s cousin, a daughter of the former chief minister.

Also the Simalajau ‘industrial city’ and SCORE, the so-called corridor of renewable energy neither of which have proved anything to write home about.

Also of course, the horrendously costly buy out and eventual rescue of a humungously failing silicon chip maker, 1st Silicon, which was touted as projecting Sarawak into a jungle centre for hi-tech, but ended losing billions.

Such ventures remain a testimony to Governor Taib’s failed hubris as the self-styled ‘CEO of Sarawak’, but also point to the far more successful self-enriching aspects to his endeavours. 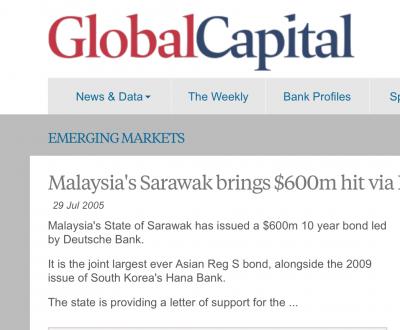 Raised through Labuan by Deutsche Bank

It is high time that the decision makers involved in assisting in all these ventures were brought in for intensive questioning by federal investigators and high time also the banks Goldman Sachs, UBS, Deutsche Bank and the remaining assortment of off-shore lenders and guarantors (including a wealth management company and an insurance outfit) who have been involved in Sarawak’s ‘Budge Black Hole’ debacle were properly grilled over each and every detail of these vast and expensive loans.

Names in the Know

In Sarawak those key decision makers, apart from Taib Mahmud himself, consist of the tight circle of trusted functionaries who have filled all the key offices of state for decades, often circulating positions amongst themselves.

Amongst them J C Fong, the State Attorney who saw nothing wrong in combining his legal position, for example, with a chairmanship of the very same private subsidiary company of the state 1st Silicon.  J C Fong, together with a line-up of Taib’s close advisors also has sat on numerous other state owned companies such as the board of Sarawak Enterprise Corporation Bhd, as both a chief lawyer and chief investor for the state.

Together with him on that board, to no surprise, was Idris Buang, who has also acted as chairman of the disastrous NCR land fund ASSAR (which has lost every penny of compensation landowners were forced to invest) and also was the head of Sarawak Energy (J C Fong was also on the board) to push through Taib’s disastrously expensive dam building policies, which likewise involved raising loans through Labuan and remain a crippling burden on taxpayers in the state. 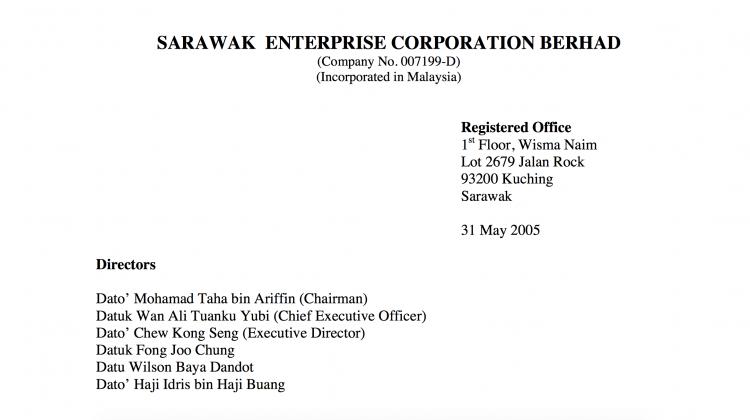 Other close advisors who could usefully answer questions would be Taib’s brother in law, Amar Abdul Aziz, who has so handily occupied the role as Chairman of the Sarawak Enterprise and Development Council, which in turn has invested in so many ventures also beneficial to the Taibs (like the Royal Mulu Resort, managed by Taib’s sister and husband and owned by numerous family members).

The story runs on and on in Sarawak and this report will keep coming back to the story and its players until the right and proper authorities are brought in to investigate this multi-billion dollar story of misappropriation and abuse of power.