Last month Sarawak’s state legal advisor J C Fong together with the deputy chief minister, Awang Tengah, lashed out at Sarawak Report for detailing allegations made in the course of a drawn out legal battle, where the two men stand accused of conspiring to prevent the payment of RM285 million awarded by the federal court.

Currently the official liquidators in the case are suing members of Sarawak’s Land & Survey Department over their part in the alleged conspiracy. Fong says he is also acting as counsel to the defendents.

Claiming in a public statement that Sarawak Report’s reporting on the various allegations in the case were defamatory the former state attorney general and present state legal advisor then suggested that Sarawak Report knowingly concealed an irregularity in the granting of the original lease by his own boss, the then chief minster and minister for resource planning Taib Mahmud, following a personal application letter dated 21 January 1994, from the chairman of the company Tanjung Tiara, whom he describes as “a well known West Malaysian politician”.

Sarawak Report has now established that the politician he is referring to is Mukhriz Mahathir, MP for Jerlun and son of the Malaysian prime minister. He is the former chairman of Tanjung Tiara whom J C Fong accuses Sarawak Report of intending to “shield” by omitting to mention his application letter to Taib.

J C Fong has even challenged Sarawak Report to lay the matter before the MACC for investigation, thereby implying apparent wrongdoing on the part of his own boss and Mukhriz as the recipient of the lease for an alleged “low premium”:

Without commenting on matters which are sub-judice, I wish to point out the glaring omissions in the Sarawak Report, seemingly intended to shield certain parties from being implicated with the alienation of the land in question, Lot 63 Sawai Land District.
For the record, the title for the land was issued to Tanjung Tiara Sdn Bhd on 28.03.1994 following a written application by its Chairman, a well known West Malaysian politician made to the then Chief Minister of Sarawak. I challenge Sarawak Report to name him and seek MACC’s help to investigate why the land was alienated to this person’s Company at what Sarawak Report claims to be “low premium”. I am sure Sarawak Report would be transparent enough to make such an important public disclosure of the identity of the person who applied for and was given the land. If Sarawak Report wishes, it could authorize the State Government of Sarawak to produce the original application letter dated 21 January, 1994 for public inspection. In any event, this application letter had been disclosed in 2 cases before the High Court and Tanjung Tiara Sdn Bhd and its liquidators do not dispute its authenticity. [J C Fong 29th July 2019]

At the time of the publication of our original article on July 27th Sarawak Report was not in fact aware of the existence of such a letter nor were we aware that at the time of the granting of the original lease for the disputed plantation Mukhriz Mahathir was the chairman and co-shareholder of the company, together with the present plaintiff seeking payment Tay Choo Foo.

We are informed Mukhriz subsequently sold out his share to Mr Tay*, by which time the once forested area had been logged.

Prompted by J C Fong, Sarawak Report has now obtained documents from late 1994, which confirm that Mukhriz was indeed  chairman of Tanjung Tiara and in correspondence with the Sarawak State Government about the clearing of the land.

We therefore conclude that he is the “well known West Malaysian politician” whom Fong has accused Sarawak Report of “shielding” in what is a plain accusation of improper behaviour made by this senior legal figure in Sarawak: 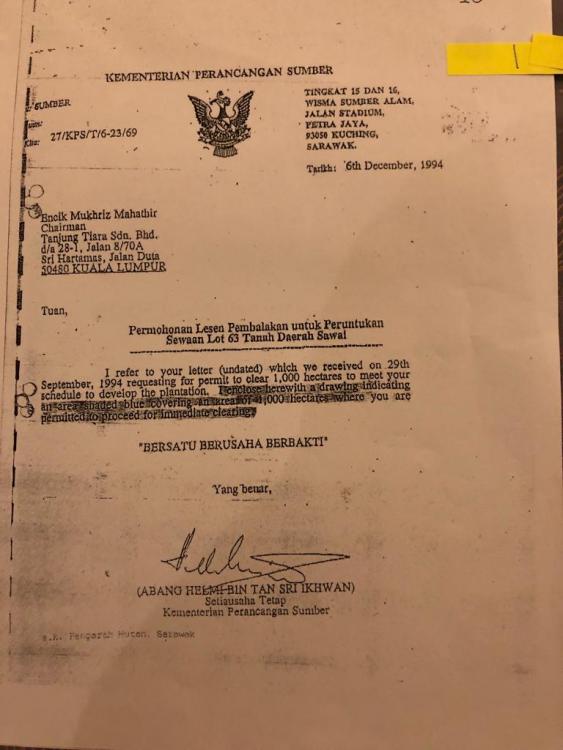 Letter to Mukhriz Mahathir as Chairman of Tanjung Tiara from the Taib’s Ministry of Resource Planning, acknowledging a request to grant clearing rights to a thousand hectares of forest

A letter (see above) sent by the then permanant secretary to the ministry of resource planning to Mukhriz Mahathir as chairman of Tanjung Tiara in December 1994 approved a thousand hectares for clearing in the concession. Mukhriz then sent a reply two weeks later (see below) acknowledging that permission granted. 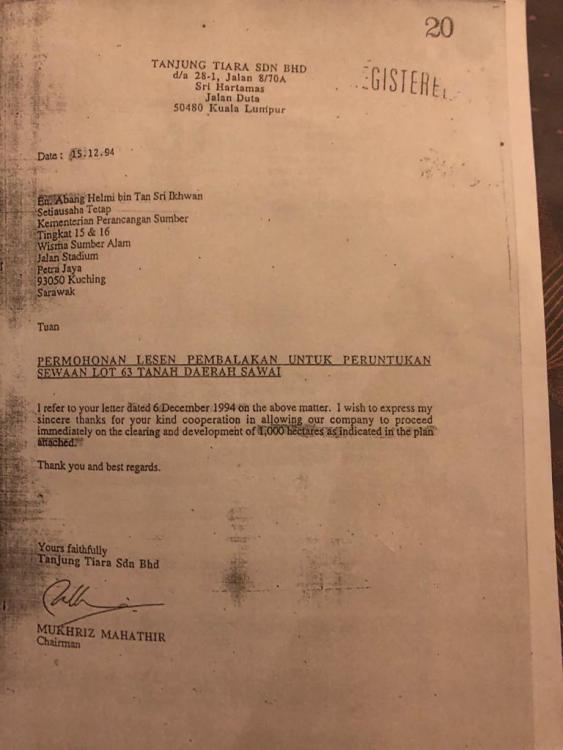 Mukhriz replied to the department thanking for the permission

However, Sarawak Report has yet to obtain the original letter referred to by J C Fong, allegedly written by Mukhriz to his own boss Taib Mahmud in January 1994, to gain what Fong now implies was an improper lease. We therefore challenge J C Fong in turn to produce that letter himself, which he claims has been laid twice before a court and is therefore open to public scrutiny.

Sarawak Report is obliged to point out that we have no proof at this juncture, beyond J C Fong’s own suggestions, that the lease was improperly granted or undersold and we further challenge him to explain why he has publicly suggested this was so.

Indeed, we would like to ask why the former State Attorney General himself did not report on his own apparent concerns about the purported irregularity, as a senior official who was privy to the matter since at least the inception of the case (which has been going through the courts for the past decade) and possibly since the actual granting of the lease way back in 1994? 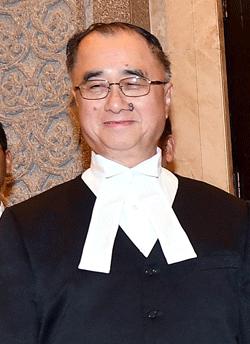 Commenting on the matter Mukhriz Mahathir has told Sarawak Report that he had cut his ties with Tanjung Tiara after just a few years.

Mukhriz said he was not aware of any impropriety and that his partner (Mr Tay) had handled everything to do with the company.

“I was involved in a small way with a plantation company in Sarawak over 30 years ago and cut ties with them just a few years after” he has told Sarawak Report.

Meanwhile, Sarawak Report finds it odd that on the one hand J C Fong has complained about this site’s reporting of a major legal battle citing possible wrongdoing by several of Sarawak’s senior public officials as being ‘sub judice’ and yet on the other hand he has condemned our failure to make an extraordinary allegation, not substantiated by any evidence we have seen so far, both against an MP who is the son of the present Prime Minister and also by implication against his own boss, the Governor of Sarawak.

Since the former State Attorney General has now made this public allegation we question why the top legal officer did not report his apparent concerns about this particular allocation of public land at the time his concerns were first raised?

*Update – Mr Tan Yik Soon, who was registered in the land registry was a colleague at the time, acting for the present complainant Tay Choo Foo.